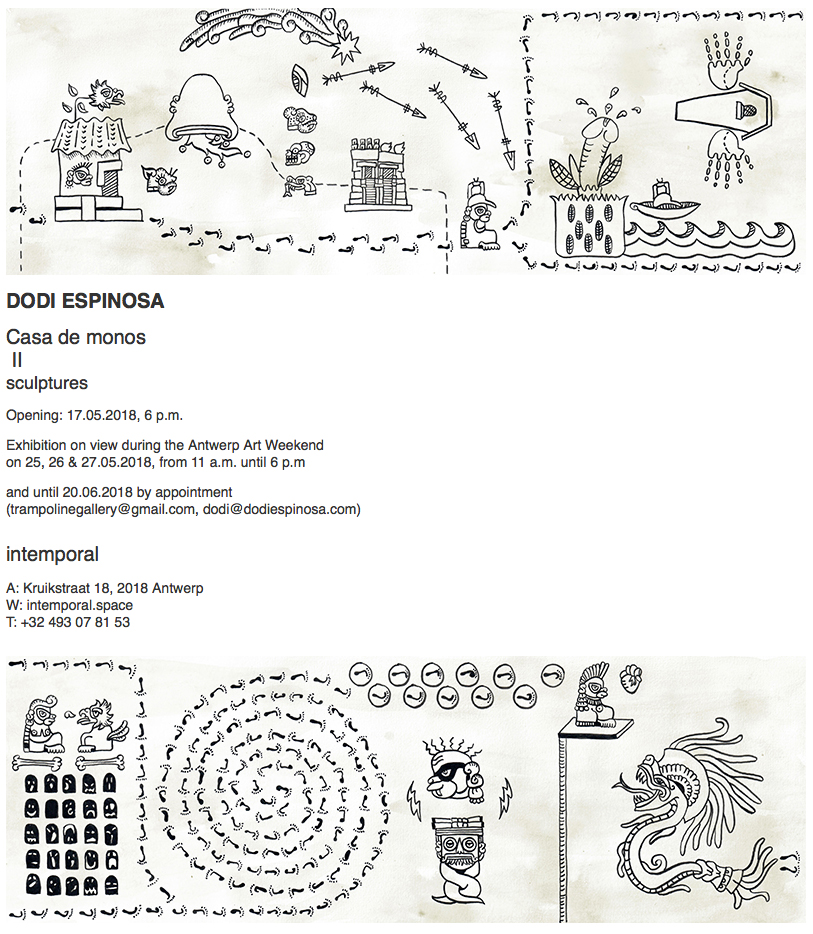 The artist Dodi Espinosa has spent years focusing on his artistic production, mainly sculpture but also film. His first exhibition was in a small gallery aptly called Trampoline which supports emerging artists. The second edition of this project is opening today and Espinosa will present his larger sculptures here.

Dodi Espinosa’s show for intemporal, Antwerp is the second part of his exhibition project inaugurated at trampoline, Antwerp in January 2018. The two shows include the whole series of sculptural works produced by the Mexican born artist over the course of the last four years. None of the works presented have ever been exhibited before.
The title of the exhibition, Casa de monos (Monkey’s House), is a direct translation of the artist’s name in Nahuatl, a language spoken in central Mexico. Espinosa comes from ozomalcalli, a noun composed by two ideograms from the Aztec iconography: ozomatli (monkey) and calli (house). For the invitation card of the exhibition, Dodi Espinosa also took over the narrative and stylistic conventions used in ancient Aztec codices to tell the story of his life, from his birth in 1985 in Mexico, his departure for Spain at the age of 16 and his arrival in Belgium in 2014.
Artefacts from pre-Columbian cultures of Mexico (Maya, Olmec or Aztec) often constitute a starting point for Dodi Espinosa, who spent his childhood in the city of Teotihuacan, well-known for its archaeological remains and the impressive pyramidal temples built on top of water sources. He combines his fascination for the silent survivors of the past with elements of the Catholic and European cultures he grew up in. Similitudes between pre-Columbian, Greco-Roman or Christian mythologies become obvious in his sculptures (signs of violence, fetishism) and his works often appear as symbols of a new kind of syncretism.
Nothing would nevertheless be more wrong than thinking that Dodi Espinosa only pays attention to the past. He is also a careful observer of the current political and social issues of our time and does not hesitate to react to the news. By integrating a contemporary event into his work like the kidnapping and killing of 43 students on September 26, 2014 in the state of Guererro in Mexico, Espinosa rather looks for the universal character of this tragedy than that he honors the young victims. In its essence the violence in his home country is fundamentally similar to other events occurring cyclically all over the world.
Dodi Espinosa’s practice can easily be described as political and engaged but certainly not in a naïve or idealistic way. Espinosa invites the viewer to an intense physical experience of contemplation, in which realism is key. In his works nothing is left to chance. When he does not copy the stylistic characteristics of works from the past, he prefers a hyper realistic rendering of the human body combined with a radical taste for a perfect finish.
His intellectual and artistic freedom reveals itself in his use of various materials. Espinosa is an autodidact who does not restrict himself to any form or material. Whenever he cannot acquire specific technical skills, he collaborates with specialized craftsmen to obtain the exact result he is looking for in order to emphasize the intensity of each of his works.
https://www.artsy.net/show/trampoline-dodi-espinosa-casa-de-monos-ii
http://artviewer.org/dodi-espinosa-at-trampoline/