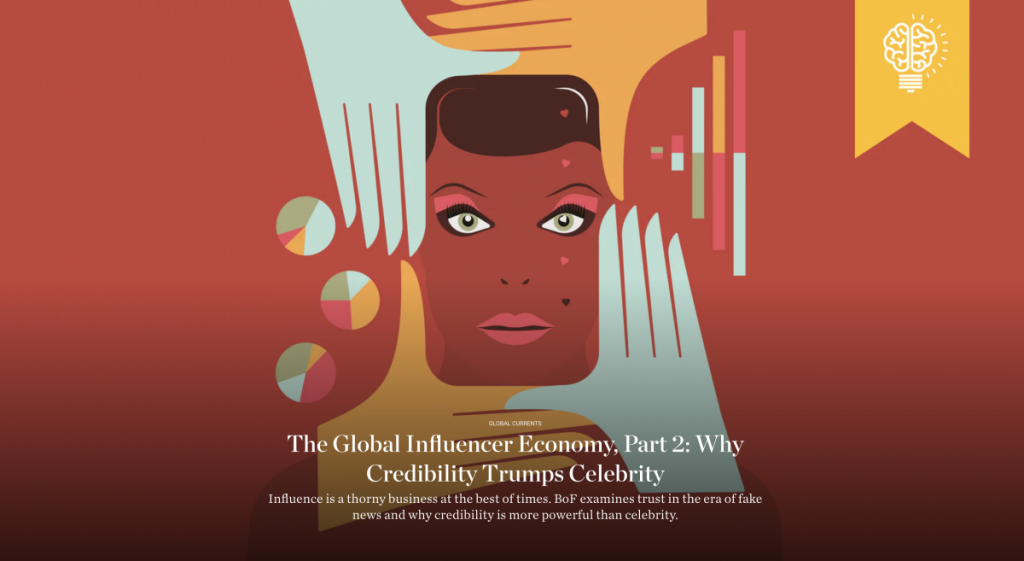 I encourage you to read the full article but again, a teaser.

“In part one of a two-part series on the global influencer economy, we examined the dark arts of influence, the “halo effect” delusion and why brands can’t afford to play it safe. In part 2, we examine trust in the time of fake news, how cultural insight boosts the bottom line and why credibility is more powerful than celebrity.”

“What is remarkable, however, is that in some Chinese marketing circles there is a lot less stigma around this. Sometimes marketers are even transparent about the proportion of fake followers to real followers. Openly buying social media “likes” harks back to 19th-century opera houses in Paris where professional “claquers” were employed to clap on cue during performances with the full acceptance of the audience. Just like the French firm L’Assurance des Succes Dramatiques that hired out “claquers” way back then, today’s Chinese zombie account enterprises get rich selling fake engagement.”

“This is a sentiment echoed by Alice Ferraz, the Brazilian fashion publicist who opened her own influencer agency called F*hits in São Paulo. “My favourite question to PRs nowadays is this: ‘How are you changing the way you think and act to become a 4G PR, a PR that is connected with the speed of our times?’” she says.”

“According to Yiling Pan, associate editor of Jing Daily, some wealthy influencers in Chongqing and Chengdu love posting a barrage of unfamiliar and disconcerting local food dishes in their feed. But wearing Chanel at a favourite dive bar or Prada at a ramen shack isn’t “off brand;” it shows an affectionate intimacy with the brand that should be appreciated, not rebuffed.”

““It’s time to face it — audiences don’t believe the individual post any more. They want to see influencers that really love a brand in order to believe them — and that requires a basic marketing fundamental — repeated exposure,” says Eyal of HYPR.”

“A Thai TV commercial for skincare brand Ocean Skin became a huge hit on Weibo, kicking off a wave of Thai influence thanks to cheeky ads like KA brand lip balm that tickled viewers with an unexpected gay twist or another format of so-called “sadvertising” that uses epic Thai tear-jerker ads that resonate well in China.”

This article first appeared in BoF’s latest special print issue: The Age of Influence. The issue — which includes our special report on The Business of Beauty — is available for purchase at shop.businessoffashion.com and at select retailers around the world. If you sign up to BoF Professional before June 29, 2018, you’ll receive this issue as part of your annual membership, which also includes unlimited access to articles, exclusive news and analysis, invitations to networking events and our members-only iOS app. Subscribe here today.

Bravo Robb Young another compelling article and I loved the Jing Daily comment about the Chanel at dive bars and the food dishes.