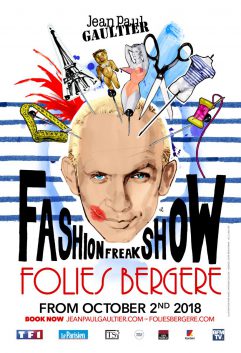 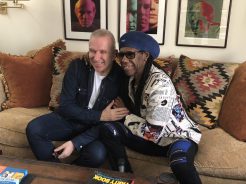 As the co-founder of CHIC, Rodgers pioneered a musical language that generated chart-topping hits like “Le Freak” and sparked the advent of hip-hop with “Good Times”.

As writer, director and set designer, Jean Paul Gaultier’s look at our times is extravagant and touching. An invitation for the audience to see behind the scenes into his over the top, poetic and magical world.

You will be privy to JPG’s memories from his childhood, early career, greatest fashion shows to the wild nights at the famous Parisian club Le Palace or in London, JPG shars his journal of the times and pays tribute to those who inspired him in film (Pedro Almodovar, Luc Besson), music (Madonna, Kylie Minogue, Mylene Farmer) and dance (Regine Chopinot, Angelin Prejlocaj).

The show wil lbe co-directed by actress, scriptwriter, director and his longstanding friend Tonie Marshall, and choreographed by Marion Motin.