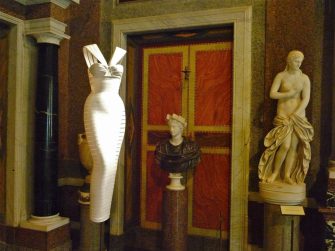 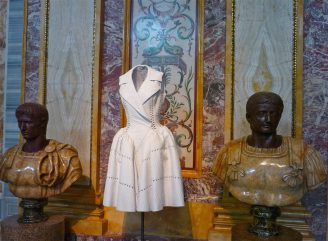 ‘My obsession is to make women beautiful. When you create with that in mind, things can’t go out of fashion.’ Azzedine Alaïa

‘A BIG master! Combining brilliantly the technique, the sewing know-how, the tradition and the modernity!’ Jean-Paul Gaultier

‘There was no one who did what he did. No one knew a woman’s body like him. He should be celebrated as one of the greatest fashion designers the world has ever known.’ Lady Gaga

‘With him disappears a certain idea that I had of the history of fashion and its authors. It embodied a territory of complete independence, completely disappeared from the landscape of fashion today.’ Olivier Saillard, Palais Galliera

‘Mr. Alaïa dedicated his life to the belief that fashion was more than just garments; to him, they were as much an element in the empowerment of women and of a broader cultural conversation.’ Vanessa Friedman, The New York Times

Conceived and co-curated with Monsieur Alaïa before his death in November 2017, the exhibition charts his incredible journey from sculptor to couturier, his nonconformist nature and his infectious energy for fashion, friendship and the female body.

Unlike many of his contemporaries, Alaïa personally constructed each garment by hand and refused to bow to the pressures of fashion week deadlines, instead working to his own schedule. His collaborative approach earned him an esteemed client list, including Greta Garbo, Grace Jones, Michelle Obama and Rihanna.

Rather than a retrospective, the show interlaces stories of his life and career alongside personally selected garments, ranging from the rare to the iconic and spanning the early 1980s to his most recent collection in 2017.

Please read Glenn Belverio’s article on ASVOF from when we both had the great pleasure of visiting the exhibition in Rome at Galleria Borghese.  : https://ashadedviewonfashion.com/2015/07/22/couturesculpture-azzedine-alaia-history-fashion-galleria-borghese-during-altaroma-july-2015/