ModaLisboa celebrated its 25th anniversary this month, with a 50th edition that felt more political and committed than ever before. Portuguese designers seemed to question the inner workings of the fashion industry and Ricardo Andrez delivered a strong message with his show, giving his sportswear shapes a critical edge. Opening with the infamous Burberry check instantly brought to mind another cherished fashion rebel -namely Miguel Adrover- but Andrez had a more playful take on clothing, illustrated by his use of shiny black nylon and attention-seeking polka dots, which again could be read as nods to Prada and Comme des Garçons. Oversize tops and patchwork outerwear looked fresh, as well as his gentle use of draping. Considering how fashion is currently embracing logomania -almost 20 years after luxury groups started the trend- the Portuguese designer’s show was an acute commentary on the vacuous and complacent nature of corporate branding. 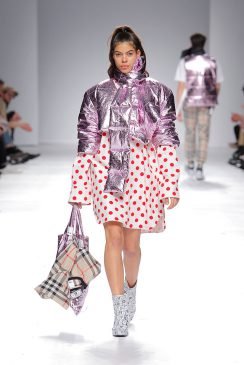 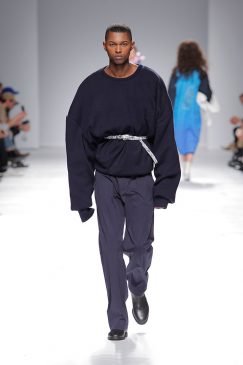