With the upcoming anniversary of the May 68 protests, and the rallying around the gun-control movement powered by students, designers have been dreaming of the 1960s and the longing of that decade for societal change, symbolized by the hippie utopia. Filipe Faísca seemed to embrace the mood this season, with a collection that focused on lightweight, ethereal dresses and looser lines. With their free-flowing hair, fuzzy ponchos and round sunglasses, his models oozed relaxed elegance and charm, never trying too hard. The Portuguese designer stayed away from garish psychedelia to concentrate on streamlined volumes and sensual fabrics, from weightless chiffon and crisp poplin to tactile velvet and soft mohair. His fluid shirt-dresses were worn with printed tights and easy slides, bringing Californian winters to mind. A naive-looking sunflower trim appeared on several pieces, while the designer’s use of transparent materials emphasized his desire for openness. Some of these dresses were hand-embroidered by local artisans, capturing the beautiful imperfections of a human touch. 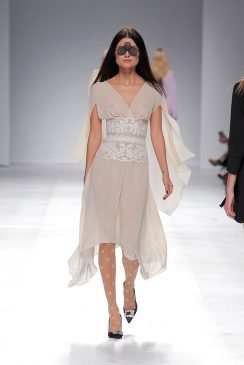 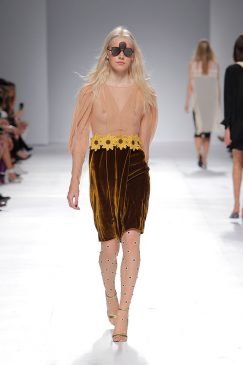