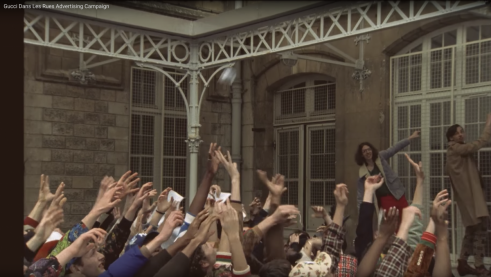 Fifty years ago, May 1968, students went to the streets in a total rebellion against the establishment. At that time the students occupied La Sorbonne and rung in the moment of change and were joined by the blue collar workers and the intellectuals. The new Gucci campaign by Glen Luchford was inspired by the Nouvelle Vague at the end of the 50’s and the 60’s,  a movement that was well documented by filmmakers FrançoisTruffaut et Jean-Luc Godard.

Gucci Dans Les Rues captures the spirit of the time but without the boundaries of a specific location or time period. Not surprisingly, the vision of Gucci is more romantic citing poets like Rimbaud under the banners of Liberté, égalité, sexualité. There are three teasers to the campaign, here are a few:

The inspiration for Gucci’s prefall collection was