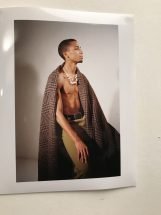 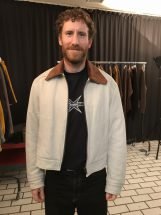 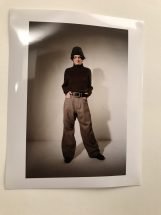 Not only is the collection aesthetic and sustainable but it is also educational, Phipps  wants to teach people something with his info graphics.  He likes the idea of you wearing his clothes and say you are standing in the line at the supermarket and the person behind you can learn something from the info graphic on your shirt. Organic trousers are based on snowboarding pants, with an articulated leg that is very manly, it is an exaggeration of masculinity and all about posturing. He enjoys exaggerating elements so people can express themselves with kindness and know that they are buying into a brand that cares about the environment as well as the aesthetics of the designs.

Click on the two videos above and let him tell you about his brand.

PHIPPS is founded on the principles of respect and curiosity for the natural world. They are exploring the concept of sustainability and environmental responsibility in the realm of style.
Spencer Phipps studied at Parsons School of Design in New York City, graduating in 2008 with a nomination as « Designer of the Year » for his final year collection – an initial exploration of sustainable fashion. He started his career at Marc Jacobs as part of the menswear design team and after, relocated to Antwerp to work with Dries Van Noten as head menswear designer.
Later,
Diane