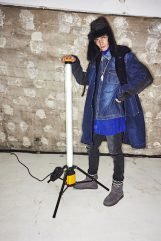 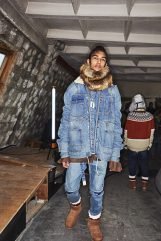 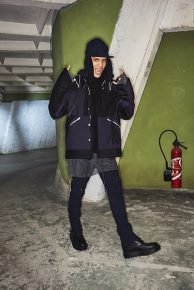 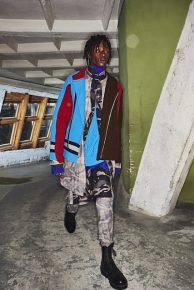 Truth. It’s more important now than ever. Taking the New York Times declaration as her starting point, Chitose Abe explores the notion of truth, perception and the primacy of authenticity. Championing independence, boldness and always challenging your own answers, as well as the status quo. Tackling the sense of eroding faith in creativity with positivity and togetherness, to create something new while being true to your own beliefs and identity. Riffing on togetherness. Splicing together seemingly opposing ideas for an idea that’s more than the sum of its parts. Subverting the rules. Nordic knits with American military utility. Fair isle with pinstripe. Arran mixed with cricket sweaters. A new take on hybrid, seemingly unravelling and de-constructing, dissecting on the front centre axis of the body this time and wrapping like a cocoon, twisting to form a new proportion or worn in several different ways, depending on the wearer’s daily disposition. Floral prints and fair isles melding as one. Working together with partners who share a mutual admiration to create something new. Re-contextualising Reyn Spooner’s Hawaiian patterns onto sacai fabrics for Autumn / Winter, applying them to corduroy, waffle and as embroidery on outerwear.

Sheepskin boots by sacai for UGG.

Jewelry by goro’s, with special thanks to Hiroshi Fujiwara