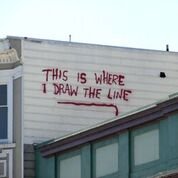 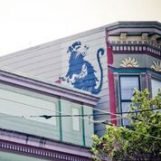 ‘The Rat’ on Haight Street photograph courtesy of Brian Grief 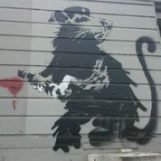 ‘The Rat’ Courtesy of Brian Greif

Colin Day’s documentary “Saving Banksy ‘ was recently shown at The Roxy Cinema among the private screenings hosted by Kelly Cutrone’s People’s Revolution. The film follows the story of ‘ the Haight Street Rat’, a 6 foot graffiti icon of mystery street artist Banksy, as it was removed from its public display in San Francisco.

Art Collector Brian Greif’s effort to remove and preserve ‘The Rat’ created a debate among art dealers, citizenry and street artists including Ben Eine, Risk and Anthony Lister. In the film the audience travels with ‘The Rat’ as it pioneers this larger conversation about the purpose of graffiti and street art.

Resistance for the removal of street art irrespective of its intention – for the purpose of auction sale or preservation – is in large part supported among the street artist community. Whereas their art is created with respect to its transient form by nature; it is subject to destruction by landlords and other artists. Director Colin Day explains,

“Tagging (illustrating on public property) is kind of the heart beat that underlies the movement as a whole, and every graff writer or street artist I know, don’t have a issue with painting public property without permission. The issue has more to do with the battle for space on the streets between the artists and advertisers that place huge billboards in their neighborhoods, as well as artwork being removed… for the public to continue to enjoy, as Brian is trying to do with the ‘Haight Street Rat’.”

Advocates for the preservation of graffiti and street art have interest for various reasons. The art is removed from the public and sold for personal possession or removed out of respect and longevity of the art. Greif supports the later position. He believes “Street Art and Graffiti are very important art movements and key public pieces from both movements should be preserved. Not everything can or should be preserved, but for historical reasons, important works by foundational artists in these movements should absolutely be preserved.”

Not released on film, is the continued impact ‘The Rat” has made across North America, since Greif’s possession. Always exhibiting in public spaces without charge, ‘The Rat’ has “exhibited in San Francisco, Kokomo Indiana, Reno Nevada, Windsor Canada and Winter Haven Florida.” Greif reasons “ I travel with ‘the Rat’ for all exhibits. I regularly speak to schools and Universities about the importance of Street Art.  In the past six months I have spoken at 13-different schools and Universities.” In the case for preserving graffiti, the art form assumes a formal title and respect in the art world from an attraction to its imagery and influence. Typically exploited with capitalism, where art buyers will pay millions of dollars for a Banksy, while he doesn’t receive benefit from the sale. Brian Greif remains a pure voice among the crowd.

Where is Banksy’s voice in all the noise of opinions? The artist’s identity remains confidential, proclaiming statements through his art. Assumptions for his reaction are up to us.

Colin Day insights, “ I think he is happy to have this issue brought out into the light. I was surprised by how many people assumed that when these Banksy Street pieces were being sold at high end art auctions and galleries, thought that he was personally making money off of the sales, when in fact, he gets nothing. It’s especially appalling, when considering the fact that a lot of Banksy’s work act as commentary on social issues that face marginalized people around the globe. So when his pieces get taken from Palestine, for example, and end up being sold for millions of dollars, this is an issue he is very much against. It is also an issue that we saw a good opportunity to highlight on his behalf.”

While remaining private, Banksy has stimulated controversy around the Graffiti and Street Art culture, a group of artists looking to publically express themselves using the world as their canvas. The art of tagging a public building is a felony, and yet the collection and auction of these public displays is unsettlingly overlooked, even though it perceives as an immoral act against the artist. Banksy’s limelight sacrificially supports his community.

After the screening, Director of the Roxy Cinema, Ilyse Singer hosted Director Colin Day, Photographer Glen Friedman, Street Artist and Fashion Influencer Dan Witz and Subway Artist cum Curator Crash to a question and answer panel. As Witz and Crash share their experiences as artists — having their work stolen to boldly tagging public property unashamedly —Friedman reiterates his illustrative point made in the film, and Day leaves us with an honest approach to the conversation: without a sound conclusion the film intends to beam light on a conflict bursting within the art culture. He expounds in later a statement, “I always recognized docs as effective tools at educating audiences.”