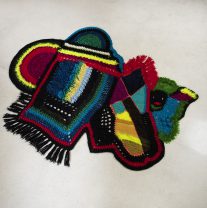 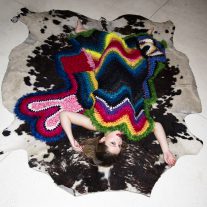 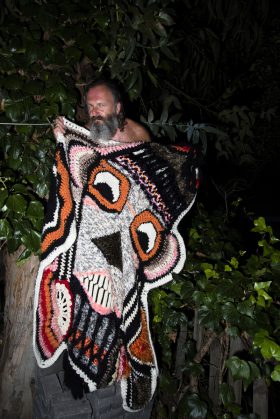 I met Tiphaine de Lussy through my dear friend Mei Hui Lu years ago and more recently when I was in London at one of Mei Hui’s Dumpling Heart pop up dinners. A little background on Paris Essex: founded by Carolyn Clewer, the Essex girl and Parisienne Tiphaine de Lussy, Paris Essex is the result of years of collaboration between the two knitwear and textiles specialists, which began over 20 years ago at the Royal College of Art. They revisit the craft of knitting and crochet, playing with hand and machine techniques to make their playful creations made from luxurious blends of mohair, wool and super-synthetics.

Each blanket is created by the duo taking on its own personality and growing organically and fluidly. Each blanket tells its own story with names like “Heebie Jeebie”, “Zig Zag Bunny” and “Miss Harlow”.

The interview is with Tiphaine de Lussy and yours truly:

DP: What was the most fun you had dressing up when you were a child and more recently?

TL: When I was child, my french grand mother had 2 wardrobes full of old clothes in a total jumble and with my many cousins we used to dress up in all these random clothes and have so much fun: everything was scrunch up and messed up but we loved it! We had hours/ days of pretend playing.

I always love dressing up for any occasion, from sports to going out…I love the project of playing around with clothes as a creative personal project: shapes, colours, and mood. Dressing up for going out is obviously the most fun as it is so close to fancy dressing: more creative and more of a fantasy project.
DP: How did you get into knitting and what was the effect that your two daughters had on your work.

TL: When I was 9 years old, my teacher decided she was going to teach our class knitting(a mix class of boys and girls!). I am left handed and dyslexic:I was the only one who wasn’t managing to grasp it at all and I probably was the keenest in the class, the teacher gave up and said I didn’t have to do it… I was devastated.

When I got home I told my mum who took me down to her best friend who could knit and she taught me the german way: I got it!  I was so excited by the whole process: one yarn and off you go… you have a fabric…magic! My mum then taught me crochet……

I didn’t do it much in my teens…but was always a maker… in my late teens, I discovered the magazine “ 100 IDEES” a very exciting “make your own stuff “ magazine and I never looked back: I became obsessed with yarns and learning to knit, to sew, make jewellery etc…Loved going to “La Droguerie” in Les Halles. All my money went there!

Ref my daughters: while they were young, I had limited time to work as I looked after them full time. I suppose I started the childrenwear brand when they were little. As young adults they are extremely supportive but have not had any direct effect on my work up to now.

DP:  Have sports always played an important part in your life and how is that reflected in your work?

TL: Sports is extremely important to me, physically and mentally. I was a competitive swimmer as a child and through my teens. I still do a lot of swimming, running, pilates and tennis.It doesn’t reflect on my work and is very separate. I generally train every day and it is vital to my well being.

DP: How do you and Carolyn Clewer work together? Are their two parts to your work like the fashion and the art?

TL: Carolyn and myself met at the Royal college of Art in the textile knit department in 1989 and we gravitated towards each other very quickly although Carolyn was in the year above me: we both had a fashion background and had come from 2 years HNDs rather than normal 3 years BAs; we both loved the same textural exciting yarns like mohair, lurex, elastic, fancy yarns etc….. and we both loved bright colours, 3d knitting and playfulness….

As soon as we finished college, we started working together on projects for prediction companies etc… and also started teaching together in art colleges (carolyn still teaches at London College of Fashion, I have stopped).

Later we set up a children’s wear label called “ Miss Fleur, Elle N’a Pas Peur” with collections called ”wish you were here” referring to the postcards one sends from a holiday at the sea side to “Miami Nice” etc… We had fun doing this and it was very well received.

As you can see we had been doing fashion for a long time and loved the creative process of it: the regular reinvention, the fun of creating a new narrative twice a year but struggled with the reality of selling/promoting and this was slowly overshadowing the joy of creativity.

About 3 years ago, after a short break, we decided to start working together again but with a new fresh approach:

We decided to reassessed what we were most passionate about, what we did best together, what we loved about working together after so many years and realised that the limitation of the fashion world was not for us for now.

Rediscover the creative energy and playfulness and fun we had together, harness it and explore it properly.

We decided not to impose on ourselves any commercial limitation for a bit and see what would happened if we just did something for ourselves with no original aim to show it to anyone:

What would happen when we let the dialogue run between ourselves without any restrictions or outside limitation.

Looking at all the things we had produced over the years: collections, rejected, realised, abandoned projects etc…. There stood in front of us a huge common and unique to us vocabulary and language we could freely work with:

Playing with cliches as well patterns and motifs which we always loved such as faces, masks, cartoons, stripes, skies rainbows, etc…juxtaposing them with new fresh ideas and inspirations. Knitting seem to still be our perfect language.

The Crazy blankets are the first objects coming out of this playful quest.

The Crazy blankets, like crazy paving, are constructed in an organic manner.

The process is a continuous creative and playful dialogue between ourselves:

As we work we will also bring in old or new inspirations it has brought up to the surface to either of us or often to both the same time.

Each blanket will tend to start with a conversation, a few sketches, visual inspiration and a colour story, an idea of a character or scene. Carolyn will then knit some bits of face, object or abstract shapes on the knitting machine and I will start on some crochet .

The work will then bounce backwards and forward between us and take form without us knowing how it is going to end up. We just work towards an aim but are very open to the meandering of the journey.

We have an idea at the start but it usually moves away from it and that is when it becomes an individual entity separate from us:

as the work is slow and painstaking it allows for a lot of changes, new inspiration to be brought in at any stage of the process. It also allows us to adapt to what is happening in front of us and react to any surprises or unexpected results.

We tend to work on different pieces at the same time…. we pass on the work between ourselves Fashion is what we started with and we do love the way ideas can flow and interact with fluidity in that context. We still have kept that frame of work in a way but without this fast turn over of ideas that the fashion world as it is at the moment requires.

I am sure we will do fashion projects in the future!

DP: You like to tell stories with your work, can you take me through a few of them?

TL: It is almost more the story of the making of the blanket: It is not so much a conventional story, more of a journey, a creative game between myself, Carolyn and the world around us.

The narrative is really how the blanket ends up having its own personality and look which wasn’t fully formed until the very end… it will start with an idea of a character, a mood then, more influences will come into it and it might become something else.

We never really know where each blanket is going to go and what it is going to look like in its final form… we go on a journey with all its potential for adventure and unknown.

The way we work is more like a game of “exquisite Corpses’ except we see what the other one is doing and react to each other.

Towards the end we will start talking about naming the blanket which we enjoy!

Finally the context in which we present the blankets is also an important part of the story:

Carolyn will create our postcards where the blankets get collaged with photos we have taken, often flying around the world like magic carpets.

Photography is also an important part of the process; We try and bring our blankets in unexpected worlds for more adventures. We discuss the shoot with our friend, the photographer Louise Melchior, she will bring in her own voice and becomes completely part of our conversation:

– The blankets laid flat on top of the girls as if they were flattened garments on top of them…becoming strange abstract shapes.

– The men role playing, wrapped in the blankets and caught in the moment by the flash in the dark.

Each blanket will end up having its own personality and name which will have slowly being told through the process of making:

– “Miss Harlow” started just as a 30’s film starlet , she then appears in Dali’s bedroom…and finally runs away in the woods…

– “Hurdy Gurdie” started as a pair of eyes and a crazy mouth and some 70’s graphics; he ends up as a wobbly psychedelic monster with a penchant for hippy music, wandering in the dark ..…

–  “Night craze” started with a man with green hair and some strips and ended up like a party night…
DP: Do you remember your dreams and how do they enter into your work ?

TL: I do remember my dreams but they don’t enter my work.
DP: What are your favourite books and films?

TL: Both me and carolyn belong to the same book club and love our books!

my favourite books: from classics to contemporary literature.Very hard to say, like everything else it is a broad spectrum.

So here are my favourite writers:

Films: I run a little film club in my house with my friends and we revisit movies

same story too many to mention but:

The battle of Algier

and many more….love watching movies and tv series!!!

DP: Who are the people that have had the most influence on you and how your life evolved?

TL: my daughters Agathe and Seraphine

my ex husband
DP: What are you working on right now?

TL: We are working on some more blankets!!!