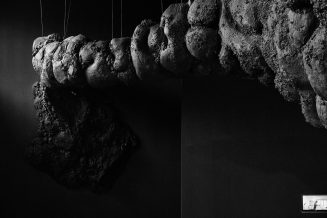 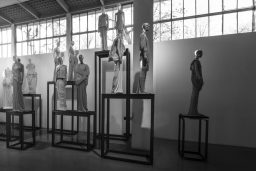 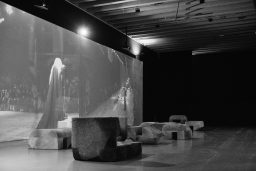 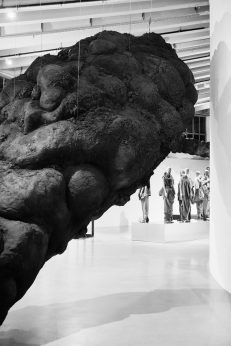 RICK OWENS. SUBHUMAN INHUMAN SUPERHUMAN, is the first retrospective entirely dedicated to Rick Owens. Owens is the author of his own narrative, curating garments, accessories, furniture, graphics and publications that he has selected from over twenty years of his career. Eleonora Fiorani is the curator of the fashion department at Triennale di Milano.

Key to the exhibition is a sculptural installation, a piece which runs throughout the show taking the form of a giant earthwork composed of concrete lilies, adriatic sand and his own hair, it serves as a metaphor of the eternal, primal creative drive that pushes humanity forward for better or worse.

“I WANTED TO TAKE WHAT A DISMISSIVE WORLD MIGHT MOCK AND CREATE SOMETHING FINE, EMPATHETIC, KIND AND INCLUSIVE.”

“IF I COULD EVER SO SLIGHTLY BLUR THE RIGID PARAMETERS OF WHAT IS CONSIDERED BEAUTIFUL OR ACCEPTABLE IN OUR GENERATION, I WILL HAVE FULFILLED ANY POTENTIAL I HAD TO MAKE ANY POSITIVE CONTRIBUTION TO THIS WORLD.”

RICK OWENS. SUBHUMAN INHUMAN SUPERHUMAN ALSO PRESENTS A LIMITED-EDITION BOX PRODUCED BY ELECTA. THE BOX IS COMPOSED OF SEPARATE BOOKS OF TEXT, COLLABORATIONS WITH PHOTOGRAPHERS, OBJECTS AND HIS OWN UNRELEASED PERFUME CONTAINING CIVET AND AMBERGRIS.