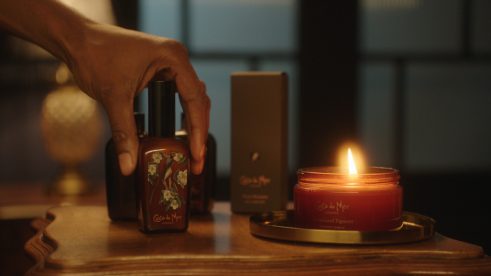 The Full Service and Coco de Mer have teamed up once again, but this time they’re adding some serious spice to the Christmas season and creating their own take on the classic Twelve Days of Christmas tune. Shot by Rankin and featuring all items from Coco de Mer’s own brand, get ready to heat up your holidays with a gift list that will blow your latex stockings off. Because Christmas is coming…  Their erotic ride started with X-The Movie and I’m sure you remember when they invited Pamela Anderson along for some Coco de Mer ‘alone time’. The idea of the latest film is that no one really wants a partridge in a pear tree for Christmas. Their idea goes more like this: Twelve Seraphine g-strings. Nine spanking paddles. And some pearl blossom silk lube. They’ve taken the classic festive tune ‘ The Twelve Days of Christmas’ and put a naughty but nice (but mostly naughty) spin on it.

“ The brand is amazing and I always love working with them. is idea had everything that I could possibly ask for in a project; sexual liberation, a cheeky twist of something traditional and of course a dollop of humour, it was so much fun to shoot and I’m just grateful that Coco de Mer were as enthusiastic about the idea as we were.”