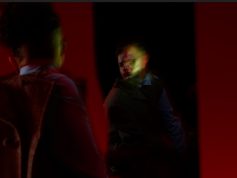 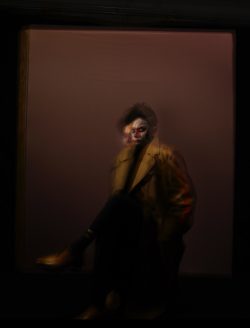 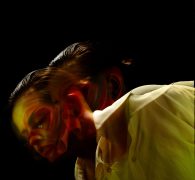 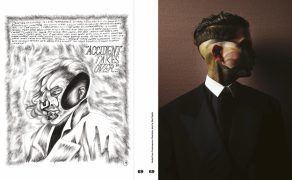 I’ve been waiting for this poster book to be published so that I could talk to you about the project by Cuba Tornado Scott. Under the Influence of Bacon is a study taken up by Cuba using references, which appear as hand written notes in the poster book, by one of the finest writers on art, David Sylvester. His approach was to look at art as a way to understand the power of the work and one artist that he helped us to understand was Francis Bacon.

“I’ve ventured to make a study on Francis Bacon, my sources of reference were many, my goal was one. All notes are from interviews by David Sylvester, all images are abstractions and interpretations of Bacon’s work . For Jake and Rhea Scott.” Cuba Tornado Scott

Many more images of Cuba’s interpretation of Bacon through abstract make-up exist but the poster book was limited to 5 images plus the storyboard illustrations.

Excerpts taken from the writings of David Sylvester appear in the texts along with the illustrations.

“I don’t know if this obsession when I was much younger with the mouth as a lot of sexual implications as people say it may have and I believe psychologically it is supposed to, but anyhow whatever it was. I was at the time very obsessed by that image its true that when you go into a bucher shop you see the beauty of the meat how beautiful meat can be. But when you think about it, also you can think of the whole horror of life of one thing living off another. And the natural pattern of life and the natural sequence of life.” Francis Bacon

In Sylvester’s writings about Bacon the importance of accidents becomes apparent.

“Painting as a double is a dual performance because for instance if you look at a Rembrandt painting you know I feel I know very much more about Rembrandt than I do the sitter. I very often find I can work from photographs of my own things that have been done years before and they become very suggestive. I want to make the image but after that chance and well chance and what I call accident takes over and if anything ever does work in my case, it works from that moment when consciously there comes something which your instinct seizes on as being for a moment the thing by which it could begin to develop” Francis Bacon

“Now of course man can only attempt to make something very very positive by trying to beguile himself for a time by the way he behaves by prolonging possibly his life by buying a kind of immortality through the doctors you see painting has now become or all has not become completely a game by which man distracts himself. What is fascinating actually is that it is going to become much more difficult for the artist because he must really deepen the game to be any good at all and return the on look at a life more violently.” Francis Bacon.