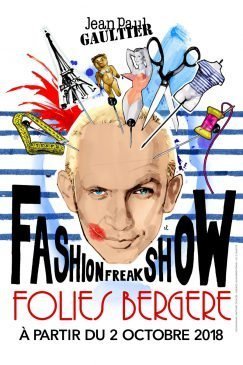 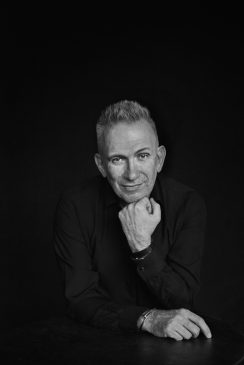 I make no secret of the fact that I adore Jean Paul Gaultier. Keeping that in mind I am super happy to tell you that starting October 2, 2018 JPG will have a spectacular review encompassing 50 years of pop culture as seen through his eyes,  “l’enfant terrible de la mode”. The viewer will be invited into the private world of JPG and that means that he will take us through half a century  of fun and frolic. What was it like to be JPG as a child? You are going to find out.  He is going to feature his most outrageous fashion shows and he’s going to show us what those crazy nights at Palace were like and the  wild times he spent in London. JPG will open his own diary and pay homage to the people that inspired him like Luc Besson, Pedro Almodovar, Madonna, Kylie Minogue and Mylene Farmer to name a few and of course  dance (Regine Chopinot, Angelin Preljocaj).

Gaultier discovered cabaret through the Folies Bergere when he was 9 years old and saw it on tv. He was convinced that he wanted to become a fashion designer when he saw the film Falbalas of Jacques Becker in which the actress Micheline Presle fell in love with a fashion designer played by Raymond Roulearu. Through the Fashion Freak Show Gaultier combines spectacle with the life that he’s lived, and what he’s experienced and will let us in on many stories that he’s never told anyone before.  He has always loved the freaks, the bizarre, the provocateurs, and of course he shines a light on what he loves.

He is already working on exclusive designs that will be made just for the  “Fashion Freak Show” but of course he will showcase his iconic pieces as well. This is a huge project and there is no way he could do it without the help of his very talented friends like the director Tonie Marshall who will co-sign this with him. Come to think of it I saw Tonie Marshall with Jean Paul Gaultier at the Cannes Film Festival this past May…I’m sure they were charting part of this out even then. Marion Motin (Madonna, Christine and the Queens, Stomae, RESISTE, the musical comedy..) will be there for the choreography.

Disco, funk, pop, rock as well as new wave, le Fashion Freak Show is also a playlist that travels the epics and will accompany JPG.

It’s exciting and tickets are on sale starting today. You can find more information here: https://www.foliesbergere.com/fr/node/24509