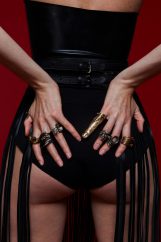 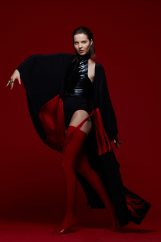 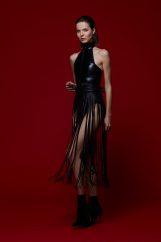 The influential Roman stylist, Ludovica Amati, was inspired by the 1949 film Orpheus directed by Jean Cocteau. Think of the scene where Orpheus uses rubber gloves to pass through a mirror into the Underworld.

In 1917 Jean Cocteau and Pablo Picasso were living in Rome at the Hotel de Russie in order to work on Parade; Cocteau’s ballet based on Satie’s music. “Cocteau had seduced the thirty-five-year old Picasso to travel with him to Italy across the bloodied Europe in the midst of the fury and the tragedy of World War I. Being Spanish but living in Paris, Picasso had avoided the enrolment , and could now escape the dread of the French capital, travelling to Rome with Cocteau.” said Paola Ugolini. That is where Picasso created the Cubist costumes and backdrop for the Parade ballet by Diaghilev. All this just to give you a bit of a backdrop on Amati’s latest collection.