The word ‘family’ means something to Serhat Isik and Benjamin Huseby, the two designers behind the brand GmbH.  Isik is Turkish-German with a background in fashion. Huseby is Norwegian-Pakistani put all this together and shake it up and you have a mix of Muslim, Middle Eastern, German and Scandinavian origins. In addition to the influence of their real and adopted family they are also very inspired by the city where they live, Berlin. Isik worked for BLESS for three years and also did some freelancing and consulting before launching GmbH with Huseby. As a photographer Huseby worked for magazines like The Gentlewoman, Fantastic Man, Dazed, Purple, W and many more. He has also had exhibitions in New York, Berlin and London. They are both equally involved in the design, concept and execution. Their adopted family consists of Berlin based artists, musicians, DJs, writers, friends and muses.

In finding their inspiration in everyday life they started looking at their fathers and how they related to their dress and how predominately Muslim men responded to colours, textures and material. Isik’s grandad and dad from Turkey worked in the mines in Germany but they dressed in an aspirational way, Huseby’s dad from Pakistan worked in his video store in Norway and was obsessed with 80’s Italian fashion, you can see some of that influence in the shiny textiles. Their parents were ‘guest workers’ and expected not to stay in Europe but they never left and they started families in europe  so their children were born here but told they don’t truly belong. Good they are not in the US… 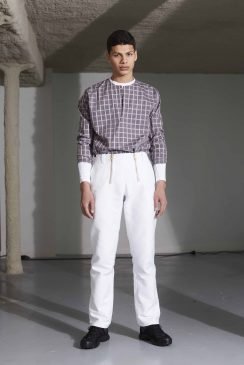 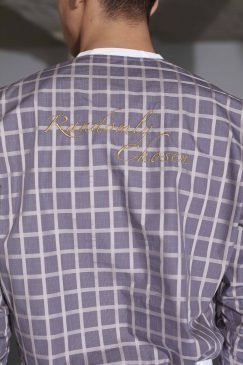 Fleece jackets were inspired by what their fathers wore in spring for the cold early mornings, the gold Cupro or silver viscose and linen mix runs through the collection and is a nod to Huseby’s dad’s love for Italian fashion. One item that especially touches me is the embroidered shirt ‘Randomly Chosen’. Think about it…when you are in the line at the airport and some people more than others always seem to be ‘randomly chosen’.