Nadir Tati is Angola’s leading high-end designer, dressing the country’s First Lady as well as African celebrities, such as Congolese actress Rachel Mwanza. Her vision is colorful, optimistic and fun, giving her runway presentations a special flavor. This season, she showed menswear and womenswear outfits that were bold and graphic at the same time. Tati focused on wide tunics for men combining different fabrics, worn with matching pants for a streamlined style. Her dresses often featured long skirts and revealing backs, which -when worn with turbans- recalled the lavish glamour of 1930s Hollywood. Back home, she makes striking made-to-measure gowns, which fulfill the needs of a clientele religiously wearing her clothes. 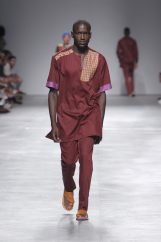 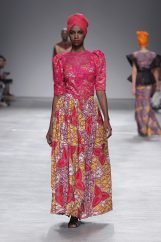 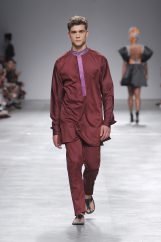