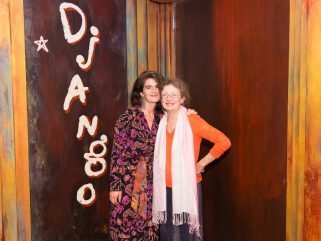 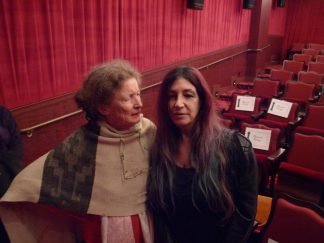 A few nights ago, my longtime pal Kelly Cutrone invited me and a select few to have dinner with Andy Warhol Superstar Viva Hoffmann at The Roxy Hotel in Tribeca. Giddy with anticipation and maybe a little bit intimidated, I mentally jotted down notes for dinner topics. Should I ask Viva if she was still suppressing the long-unseen Blue Movie, the 1969 Warhol flick that is considered the first adult erotic film depicting explicit sex to receive wide U.S. theatrical release? (I think I just answered my own question there.) Would she want to talk about my favorite film she stars in, Nude Restaurant or would she find that boring? (Answer: Yes. It seems she finds all those films boring.) 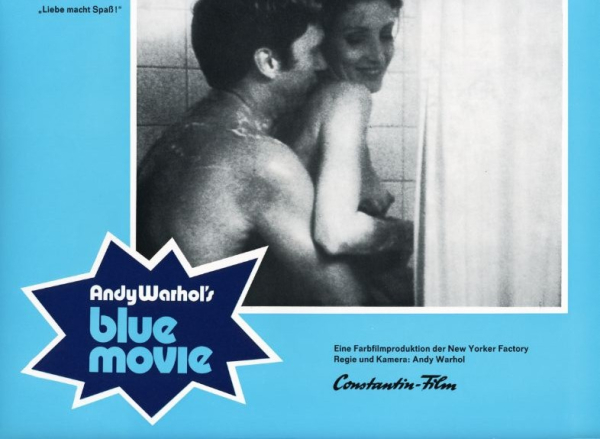 I was seated next to Viva at dinner, who was sitting next to her three-year-old granddaughter Rosemary Dapkins. Across from Viva we were blessed with the presence of Anthony Haden-Guest and also Debra Scherer, who has worked at both French and Italian Vogue, and as an assistant to Polly Mellen. She now runs a website called The Culture Crush.

I chatted with Viva as we waited for one of her daughters, the actress Gaby Hoffmann, to arrive. I mentioned how earlier that day I was talking to my friend Camille Paglia, a big fan of Viva’s work, about how Camille had the magnificent New York Times Magazine cover from November 1968 featuring Viva, Andy Warhol and Ultra Violet (“The Return of Andy Warhol”) pinned to her wall through four years of grad school at Yale, starting in 1968 (and also when she taught at Bennington). Viva was unmoved. (“That’s sad,” she said bluntly.) 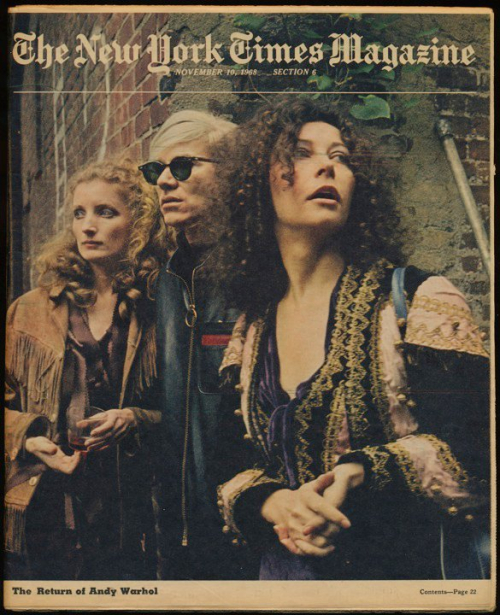 The cover in question. Camille Paglia and I both love the grittiness and natural light. “That distressed brick wall was really major for a cover photo on the NYT Sunday magazine–it conveyed a downtown sensibility making its mark at last!” Camille told me. “This photo was a supreme icon of my intellectual development!”

“No. Is that the one with John Giorno?”

“That was Sleep,” I corrected her, as I realized maybe those two films are not so different from each other after all. As I was about to ask her how she would talk about two films she’d never seen during the Q&A, her daughter Gaby swept into the room. Tall and with a dramatic mane of brown hair, Gaby galvanized our two tables as she turned heads and energetically introduced herself to everyone, before Viva steered her into a seat next to Anthony Haden-Guest.

“Gaby, Anthony knew your father,” Viva explained. “You need to talk to him.” Gaby’s father, the actor Anthony Herrera, passed away in 2011 and, judging from the anecdotes that ensued, was not well-loved by either Viva or Gaby. Anthony Haden-Guest had some stories about the time he traveled with Herrera but I was drawn into some martini-fueled fashion-and-art chatter with Debra Scherer as the evening began to happily blur. 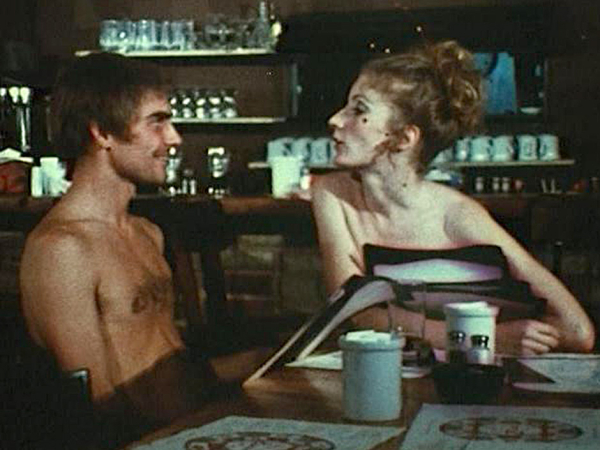 I’ll have what she’s having. Viva in Warhol’s “Nude Restaurant.”

Viva is 79-years-old and draped in a veneer of gentle grandmotherliness that belies the saucy, acerbic personality that still lurks just below her reading spectacles and shawl—the persona we know and love from Warhol’s films and as the voice of her 1970 roman-a-clef Superstar. (In it, Warhol is referred to simply as A, with pimples and in a black leather jacket “surrounded by fags,” the Factory is “the Plant,” Edie Sedgwick is “Evie” and getting shot up by a doctor in her dressing room during a film shoot, and Chelsea Girls is “Gramercy Girls.”) 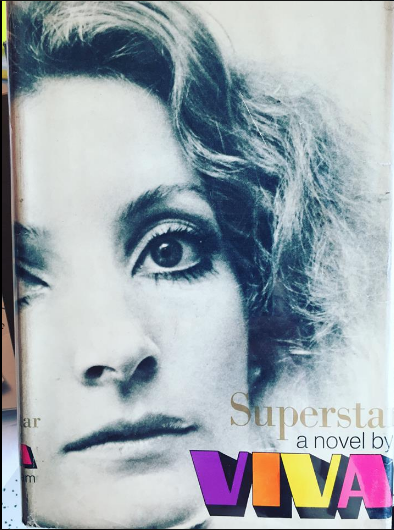 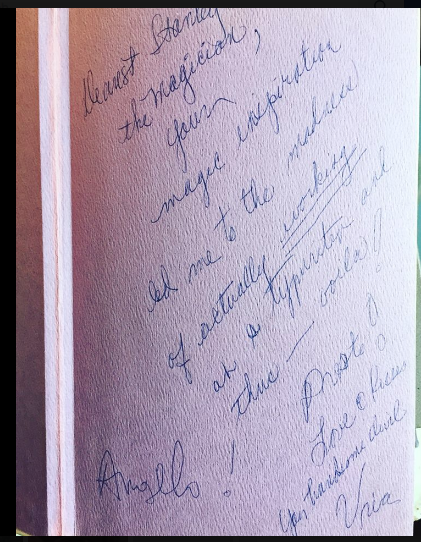 Halfway through the dinner, I realized that I had forgotten to bring my copy of Superstar to dinner (signed, as it turns out, to Stanley Bard, former owner of the Chelsea Hotel.) “I’m mad at myself for forgetting the book,” I told Viva. “And now I’m mad at you,” she frowned. I found the book in a used bookstore near Washington Square Park about 10 or 15 years ago and the inscription from Viva reads: “Dearest Stanley the Magician, Your magic inspiration led me to the madness of actually working on a typewriter and thus — voila! Presto! Angels! Love & Kisses you handsome devil. Viva” 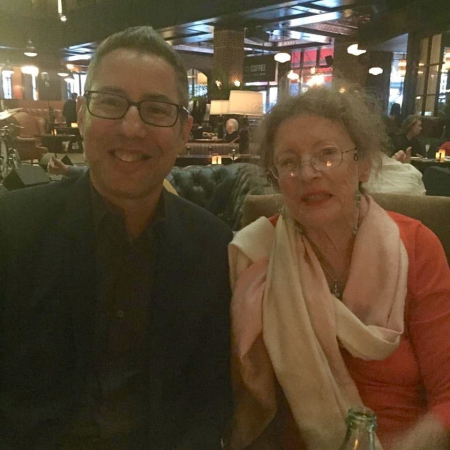 Me and Viva at dinner

The dinner was beginning to feel like one of those Dick Cavett Show group interviews that you hope will go on forever, until I was alerted to the time by a text from my friend Nile Cmylo, a fashion designer who lives in the Chelsea Hotel and was there when Viva was a resident until around the late ’90s. (“Are you coming to this screening?” Nile texted. She and some other friends were in the Roxy Hotel’s theater since before 7pm waiting for the movie to start. “I’m having dinner with Viva,” I text-bragged back.) It was then that the dinner guests realized we needed to move from the dining room to the theater. The film that was actually screened, Lonesome Cowboys starring Viva, began about an hour late. 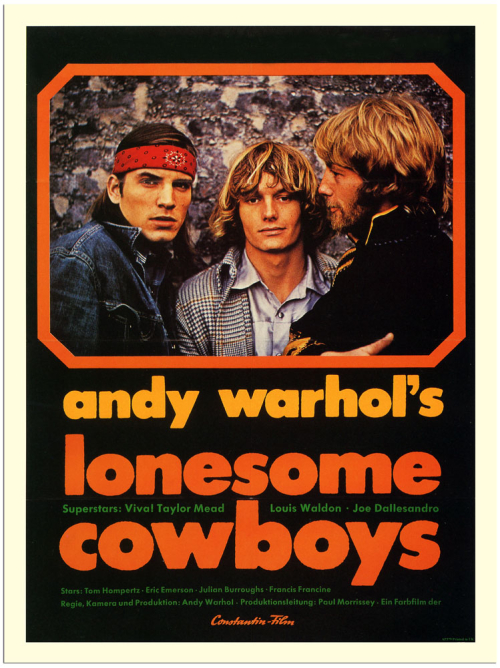 It certainly was a treat to see Lonesome Cowboys on a big screen again after so many years. The Roxy projected it in 16mm and the colors looked rich, with brooding darkness alternating with bright desert sunlight. Beautiful male bodies on display along with a hilarious performance by Viva, looking especially gorgeous here, terrific costumes and an obvious influence on Brokeback Mountain. My favorite scene involves Joe Dallesandro and Taylor Meade dancing to “Magical Mystery Tour” by The Beatles.

You don’t need to be invited to a private screening at The Roxy Theater, by the way…it’s open to the public:

The Roxy Cinema, taking its name from the esteemed 1920s motion picture palace, is an intimate 99-seat cinema in downtown Manhattan. Featuring an Art Deco-inspired design with craft cocktails and a gourmet concession stand, the theater specializes in first-run independent films, rare archival prints and 35mm cult classics, and runs special cultural programming including film series, director and actor Q&A’s, and artist collaborations. Visitors may enjoy cocktails, dining and entertainment at The Roxy Bar or The Django before or after the movies. Get the full schedule here.

For posterity, I have posted Lonesome Cowboys in its entirety at the bottom of this post, and do make sure to watch the Q&A with Viva up top. She tells a rather upsetting story about Eric Emerson (which is still bothering me since I am a big Emerson fan, especially his red-light-bathed scene in Chelsea Girls, that Sonic Youth paid homage to in their song “Eric’s Trip.”)