One of the highlights of the last show powered by the Royal Academy of Fine Arts in Antwerp was to discover Quinten Mestdagh’s incredible work, which had a tangible aura and presence on stage. A 3rd Year graduate, Mestdagh was inspired by the power of fashion imagery whilst looking for ways to disrupt it through his clothes: “I have always been attracted by highly stylized images in fashion magazines and advertisements. Last summer, I started collecting pictures in the archive of the MoMu library in Antwerp. With those images, I made collages and paper 3D experiments to create tension and roughness, contrasting with the beauty found in fashion photography. I then approached the garments as abstract panels for the images.” Made of printed fabrics applied on diverse materials, such as felt, paper and stiff vliselines, his pieces had a strange sense of elegance, despite their innate abstraction. The lines were sleek and sculptural, but a feeling of aggression could be felt in his prints, which made the silhouette powerful. Mestdagh used iconic faces, which are often referred to within the industry: “Some of the faces in the pictures are well-known fashion models or icons from the past, as well as present times. There’s Nico, Karen Elson, Princess Elizabeth of Toro, Penelope Tree… I was really looking for faces that had a kind of extreme beauty about them, but also something that’s a little off and mysterious.” Beautifully shot by Antwerp-based photographer Michaël Smits -and modeled by Luka van der Veken- Quinten Mestdagh’s garments are majestic and complex at once, showing women as fragmented selves and visual beings, reflecting our current obsession with representation, as well as singularity. 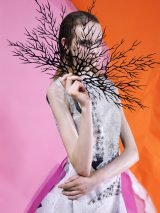 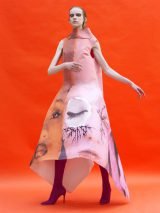 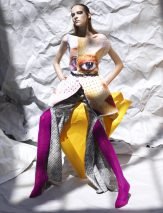 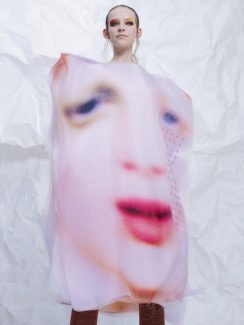 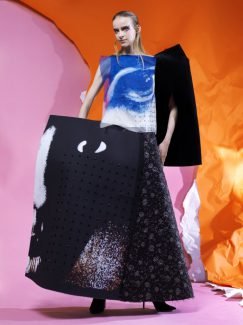