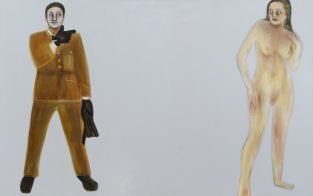 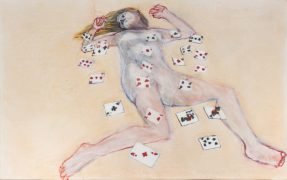 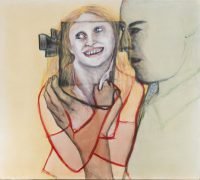 June 1st marks the opening of the solo exhibition of oil paintings and tempera on board by Ophra Shemesh. The eighteen works in tempera on board tracethe journey of a girl child on the brink of womanhood, expressing her feelings of abundance and surrender.

“The naked nature of the egg tempera medium echoes the emotions of the girl and evokes a brutal response to her stories. Its unforgiving method of application resembles the unforgiving world she faces. The feeling that remains after story and memory have vanished thrust the observer into a shared intimacy.” said Loretta Harms.

The five large-scale works in oil show the battle between forgetting and remembering. It is about shadows, shadows of truth , repetitions, gazes inward and outward, the truth cannot be known, even when the light comes the shadows remain.

Ophrah Shemesh was born in Israel and has resided in New York City since 1979. She studied at The Bezalel Academy of Art and Design in Jerusalem and the New York Studio School and was research assistant to art historian, Meyer Schapiro. Shemesh’s solo exhibitions include, Galleria Philippe Daverio (Milan, 1992), Galleria S.A.L.E.S. (Rome, 1995), Mario Diacono (Boston, 1995), Guy McIntyre