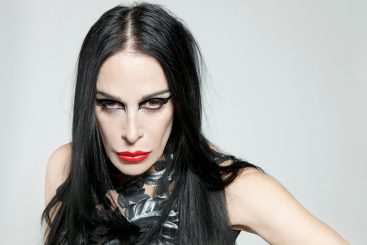 Eight years have gone by without a new album from vocalist, composer and avant-garde icon Diamanda Galas but today she has announced  the release of two new albums. Guilty, Guilty, Guilty was released in 2008, All the Way, a collection of radical re-workings of traditional and jazz standards and In Concert at Saint Thomas The Apostle Harlem, which was recorded during the Red Bull Music Academy Festival in 2016 will be out March 24th on Galas’ own label Intravenal Sound Operations.

Diamanda Galás will be touring these “death songs” around North America this spring, will full dates to be announced shortly.

The composer, vocalist and activist Diamanda Galás is one of the most uncompromising and influential avant-garde performers of the last thirty years, with an extensive catalog of work that is often oppressive but always thrilling. With a searing voice and background in classical and jazz piano, Galás has continually asserted the connection between her art and activism, tackling subjects like torture, genocide and AIDS in philosophically thoughtful and musically incendiary ways. Galás has previously collaborated with musicians varying Led Zeppelin bassist John Paul Jones to influential composer Iannis Xenakis, in addition to numerous others, and her vocal technique and performance has been cited as an inspiration by such performers as PJ Harvey and Anohni. Over the past few years, Galás has been working extensively in Europe, in particular on the theatrical performance “Das Fieberspital (The Fever Hospital)” — based on the writings of Georg Heym, Gottfried Benn and herself — at the Grokowski Institute in Wroclaw, Poland.