Y/Project designer Glenn Martens was in top form last night with a bold and inspiring collection that mixed historical styles with 90s references. Volumes were dramatic and garments quite directional, ranging from intricate corsetry, floor-length skirts and dresses to a huge fake-fur number and impressive outerwear. Hoodies were poetically covered in tulle, while pants with wired piping added a textural quality to some of his looks. The effect was both precious and urban, blending Napoleonic details and baroque accessories with user-friendly sportswear. Martens keeps exposing the body in perverse ways, looking for new erogenous zones that kept his audience thinking. Y/Project’s first footwear line, which was introduced in the show, did not disappoint: statement ruched thigh-high boots, strappy rhinestone sandals and witchy ankle boots will surely attract some new fans to the brand. 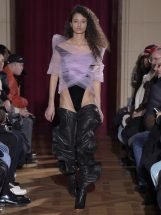 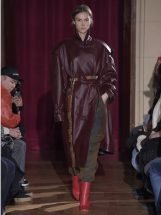 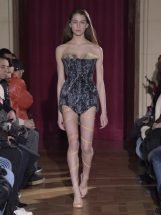