Inspired by Tel-Aviv’s unique architecture, Julie Paskal opened the show calendar in Paris yesterday. Her collection was soft, romantic and sculptural, underlining the feminine appeal of her dresses and cozy outerwear. It was nice to see her focus on daywear styles, which were elegant and youthful. Textile treatments were intriguing, such as 3-D flowers made out of reflective fabric, while the designer continued to explore her penchant for technical finishings, such as lace enclosed in transparent vinyl. White was, in fact, key within the collection, giving a futuristic and virginal feel to some of her garments. Balancing stark black with greens and an exclusive atlas print, Paskal’s show was a delicate and engaging proposal, finding the right balance between wearable and abstract. 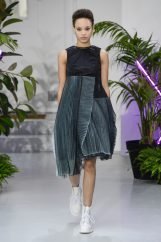 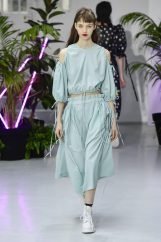 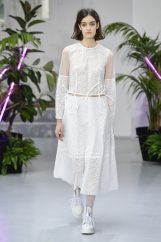