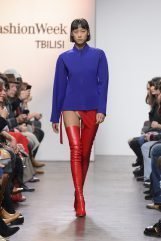 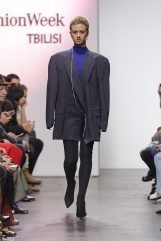 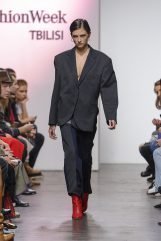 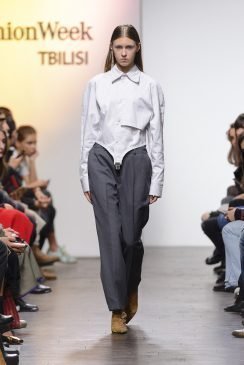 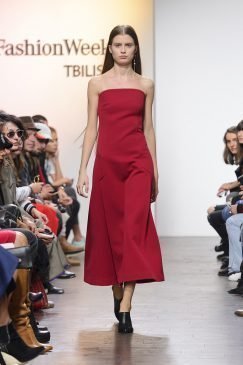 during my trips to Georgia, I managed to meet Irakli Rusadze, the guy behind uber cool label: Situationist.

The Georgian designer is the special guest of the tradeshow White Milano with a catwalk show with the support of Camera Nazionale della Moda (CNMI) partnership. The tradeshow has already dedicated the edition of September 2016 a strong focus on Eastern European fashion, reserving a special exhibition area to the made in Georgia. On that occasion they were invited seven talents,selected by Sofia Tchkonia, creative director of Mercedes-Benz Fashion Week Tbilisi. In February 2017, however, the choice fell on Situationist, a talent to keep under the radar, a name of which there is so much buzz around in the recent weeks and WHITE is willing to promote and believe in.A new wave of style, started with a country that has much more to offer than Demna Gvasalia’s talent. Designed by Rusadze in 2015, Situationist is definitely known for its Soviet- aesthetic inspired, but also for the elegance of the most sophisticated forms, combined with consistent use of basiccolors. In particular, Situationist stands out for having introduced a touch of national pride in its DNA, through the T-shirt printed with the Georgian flag, presented on the catwalk for spring / summer 2017 that immediately became an object of cult among the community of influencers until the top model Bella Hadid spot him. The brand has jumped to the honors of half the world record, just when the supermodel has chosen to wear the Situationist leaders in the streets of Paris during fashion week in January.

We have met Irakli Rusadze, to discover who is SITUATIONIST

Why this name: Situationist?

There are at least two reasons for that: the first is that I find it to be an interesting word, in keeping with the fashion world. All garments indeed stem from a given situations and move towards another, they are interconnected and interact in circumstances that transform them and that they, on their turn, can change. This notion appealed to me very much. The second reason is that I have always been fascinated by the Situationist movement of the late ‘50s, a movement which involved politicians, artists, thinkers, and revolutionized many a stance in Europe.

Has your background, as unorthodox as it may be, proved to be striking in your career?

I’m not graduated in design. I have learned the most important things in my job by sitting down and watching how a fabric is sewn, cut, and modelled. I have been doing this since I was 13 (Irakli is now 25 years old). I am a sort of self-made man, but I have never stopped studying. I am still attending short courses or workshops in Turkey, Azerbaijan or Georgia.

Who is a Georgian designer who inspires you or who you relate with?

That’s kind of a difficult question: in general I would say that what I do differs quite a lot from the Georgian fashion scene. Demna (Gvasalia) is definitely a reference point, for my generation and for all Georgiansdesigners: sharing the same, cultural and social background leads to a common perspective. I respect him very much, the work he has done with Vetements is incredible, however I believe that his garments are meant for a fairly narrow niche of users, while what I do when I create clothes for Situationist, is a style that can embrace and meet the needs of many people, who are different from one another.

How would you define Situationist’s style?

I usually start from a classic base, rather traditional in taste, and then I enrich and “adjust” it with unconventional details, colours and inlays, so as to disrupt the archetypal harmony with something unexpected.

The fact that Bella Hadid has chosen to wear Situationist’s items has been quite a hit, hasn’t it?

It’s been a great emotion, and totally unexpected. Her stylist contacted me and told me that she had seen the fashion show and was really thrilled to wear some of the collection’s items. I’m flattered, really.

What does it mean to be a designer in Georgia?

If you go for a walk in some industrial, suburban districts of Tbilisi – which I love very much – you will still hear elderly people blaming the boys, saying things like: “Go home and study, do your duty, otherwise you’ll end up like a tailor”. Which is emblematic because, if, on one hand, creativity in Georgia is evolving, being nourished by a long-standing tradition of craftsmanship and thoroughness, on the other society still does not think that thereis anything exciting or valuable to do this job. Which definitely does not help getting rich with it.

What is the concept driving the creative process in Situationist’ collections?

The inspiration comes from everyday life, the routine of a post-Soviet country like Georgia: one can find inspiration just by going out and looking at reality for what it is. I also love unquestionably raw, natural, materials: leather, wool and cotton. It’s also important to consider that everything is produced in Georgia, I follow the entire production process: from sketching and cutting down to the very design stage. Also the accessories are entirely designed by myself.

After Mercedes Fashion Week Tbilisi now Milan, how do you feel about it?

I joined Mercedes Fashion Week Tbilisi directed by the immensely talented Sofia Tchkonia and from now on it’s been a success after another, I finally got recognized and I’m so grateful to land in here in Milan, thanks to White and Camera Nazionale della Moda. I really hope not to disappoint anyone, my ultimate dream is to create clothes people love to wear. My show is on the 24th at 20,30 at the Science Museum and I can’t just wait to begin!

Fashion has always been her true calling since she started working as fashion editor and stylist with publications of the likes of Made05, Rolling Stone, Grazia, Glamour, Vogue.it, i-d, asvof.com, d.repubblica.it, La Repubblica and Hunger, always cultivating a side interest in artistic perfumery and everything curious, from travels to music, from food to digital. She is also contributor for VOGUE ITALIA for the talents section and Esquire Italy. Her passion lies in discovering new fashion trends, emerging designers and interviewing interesting people all over the world. She also has started to work as stylist for shows and presentations, among the brands Giorgia works with you can find: Situationist, Ssheena, Ellassay, Birkenstock. Diane Pernet is her mentor and one of the most important people in Giorgia’s life.