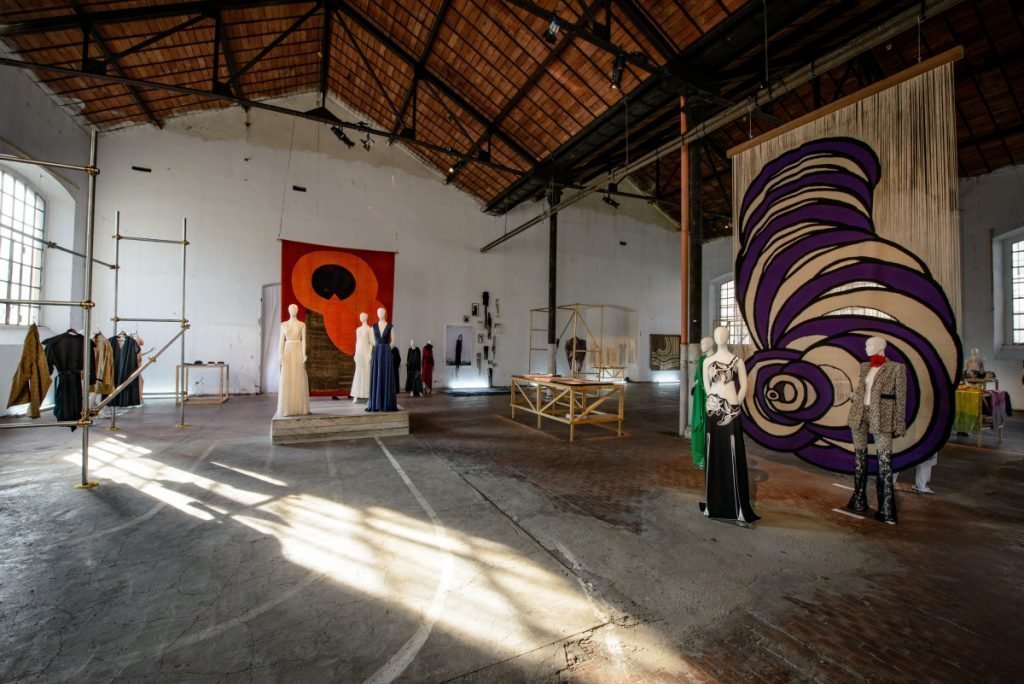 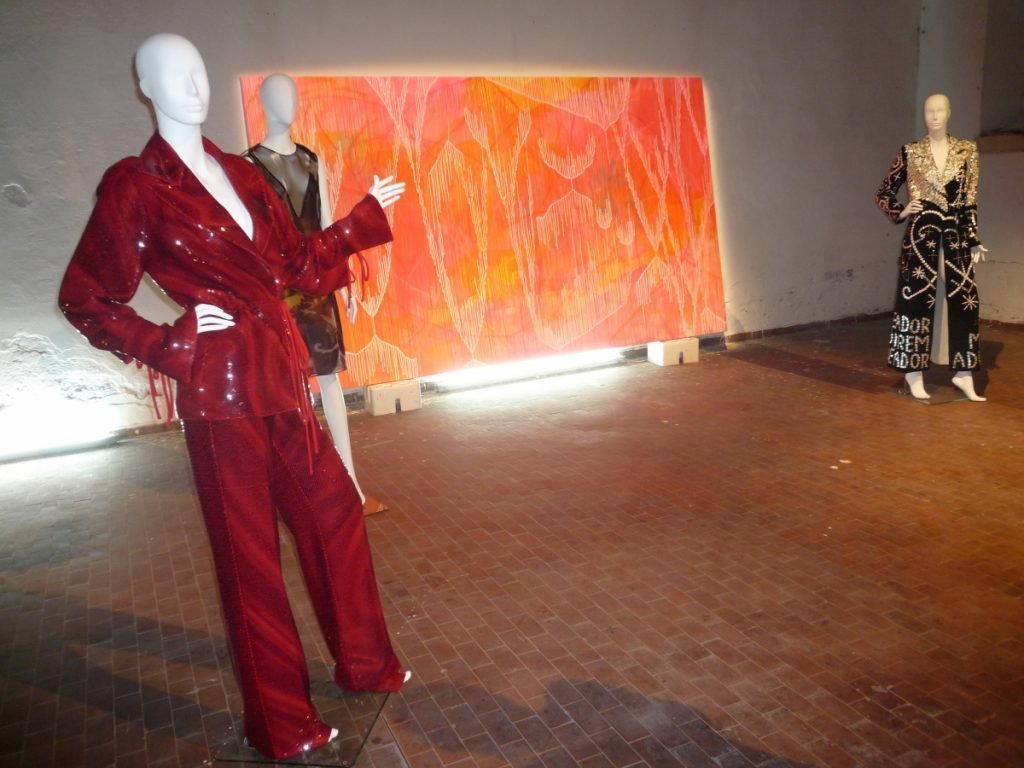 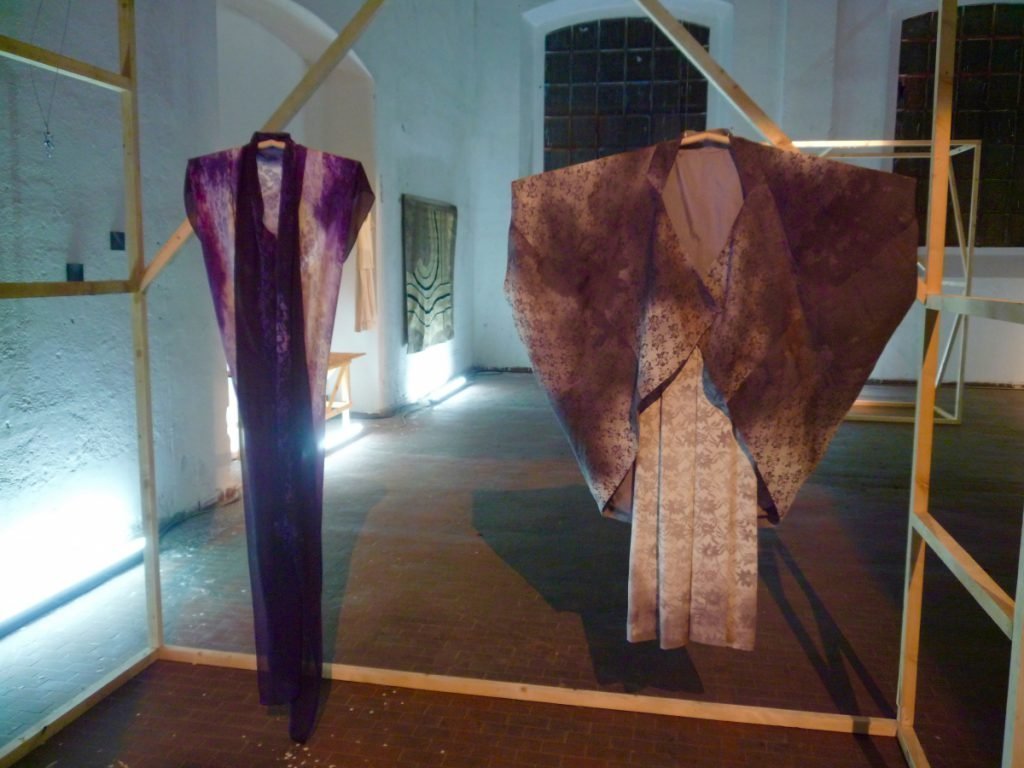 The theme of the exhibition was “Studio” as the workplace of both the artist and the artisan. “It is a celebration of fashion as a phenomenon reviving the enthusiasm for the skill involved in artisanship and poetic romanticism,” writes Tosi Pamphili. “It encapsulates spiritualism, allegories, fairytale symbols and the re-imagining of impoverished sportswear, thanks to the culture of this new virtual world.”

The re-imagining of impoverished sportswear! This optimistic phrase has become my new daily mantra, recited over and over like an incantation for repelling malignant spirits, as I traverse the nightmarescape of New York’s East Village, through gaggles of millennial arrivistes: bourgeois vagabonds dressed in droopy sweatpants, tatty pajama bottoms, shorts and flip-flops in frigid weather and, of course, the dreaded yoga pants.

Clara Tosi Pamphili has that natural gift, unique to Italians, for a specific style of flowery—but also visionary—prose and conversation. When I arrived at the opening night party for this exhibition and AltaRoma, Clara described my twice-yearly appearances in Rome by way of a guileless metaphor. “Glenn is like a special light that you keep in a drawer by your bed,” she explained to a young designer. “You don’t see it, but you know it’s there, always near to you. And then every once in awhile, you take it out to illuminate every dark corner of the room.” 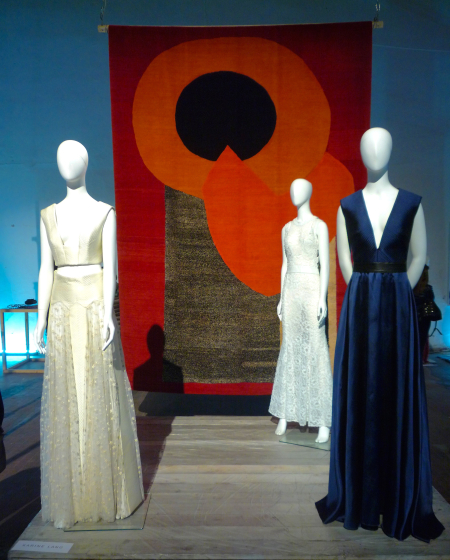 First I’ll talk about these dresses and then I’ll explain the exquisite tapestries, one pictured here, that were used in the exhibition. The gowns are from the brand Karoline Lang by the young designer Karine Tawil. They combine the elegance and style of two cultures, Lebanese and Austrian. After working for Marni in Milan and Reem Acra in New York (I used to visit their showroom often when I was a stylist back in the ’90s), Karine returned to Beirut and started designing couture at home. After decades of Western domination, it’s so nice to see Middle Eastern couture in Europe—a movement that AltaRoma has been showcasing in recent editions.

The dresses look splendid in front of a vivid tapestry by Enrico Accatino (1920–2007), a Roman artist who, starting from the mid-’60s, produced more than 60 tapestries with Fernando Di Nicola and Nicola Tonelli, artists who teamed up with several local weavers to establish a studio in Italy’s Abruzzo region town of Penne in 1960.

They began as an experiment involving the development of two- and three-dimensional solutions to create “woven wall paintings” which, from that time onward, were described as “Tessilità” or fiber art. Thanks to Accatino, this ancient artisanal technique was infused with new life that drew inspiration from the cartoons of Alexander Calder and Le Corbusier. 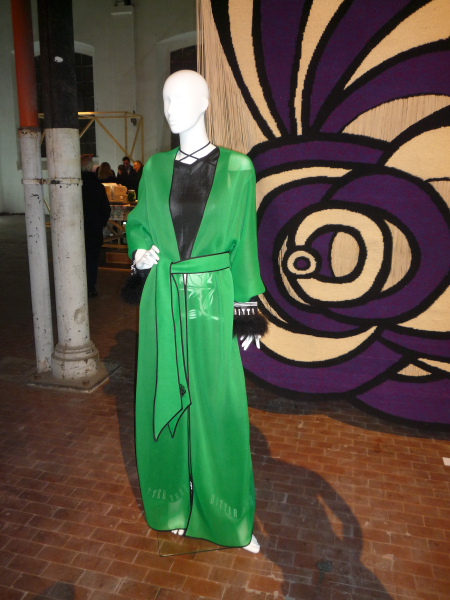 Fassbinder’s The Bitter Tears of Petra von Kant—that cinematic masterpiece of shrieking lesbian drama, deliciously outré couture (you haven’t lived until you see what Petra and Karin wear on their first date) and alcoholic angst—was the inspiration for these designs by young German designer Frederick Hornof. (The green of this robe evokes the negligee Petra is wearing during the notorious drunken telephone and shag carpet scene.)

After graduating from the Royal Academy of Fine Arts in Antwerp and working as an assistant designer at Thierry Mugler, Frederick returned to Antwerp to establish his own brand. To communicate both the severity and lightness of Fassbinder’s anti-heroines, Frederick employed feminine lace and stiff cotton to “construct a visual image of introspective confidence, with new individuals, both covered and uncovered.”

Because beautiful clothes also look great in a rumpled heap at the foot of a fresh acquaintance’s bed, don’t you agree? 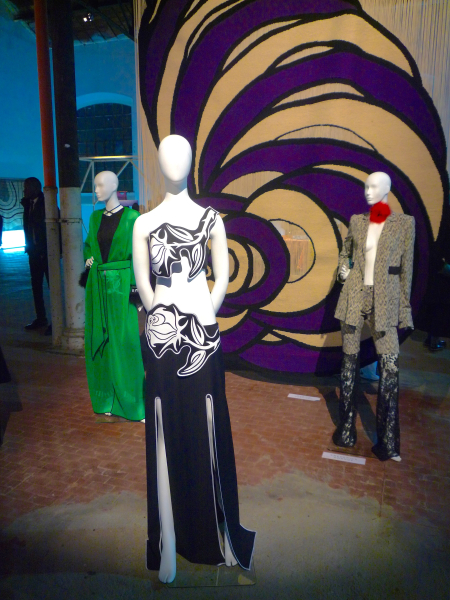 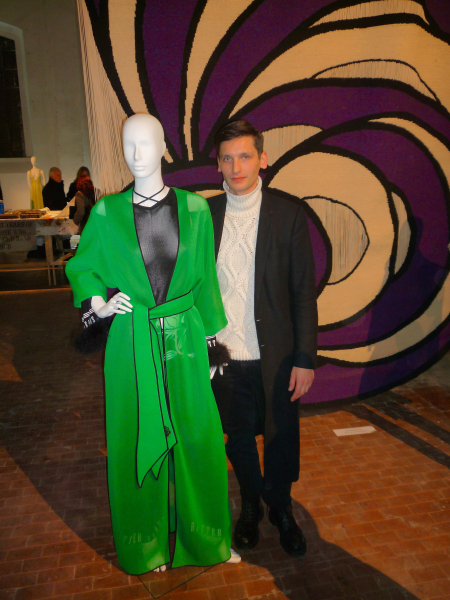 There were no bitter tears spilled on this evening: Frederick Hornof and one of his creations. Tapestry by Enrico Accatino. 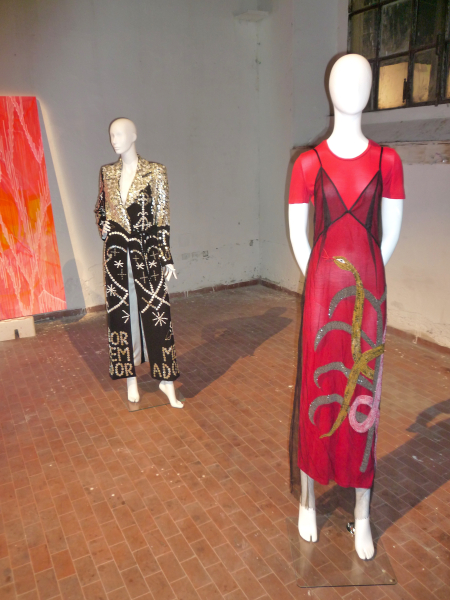 Jezabelle Cormio’s beguiling designs channel the voodoo energy of Haiti and New Orleans. She lives in Veneto so she can oversee the workshops where her clothes are produced. There, a team of embroiderers, print and pattern makers, seamstresses and innovators in the fields of digital and analog technology work their magic. Her collections will be sold exclusively at Opening Ceremony in New York. Brava, Jezabelle! 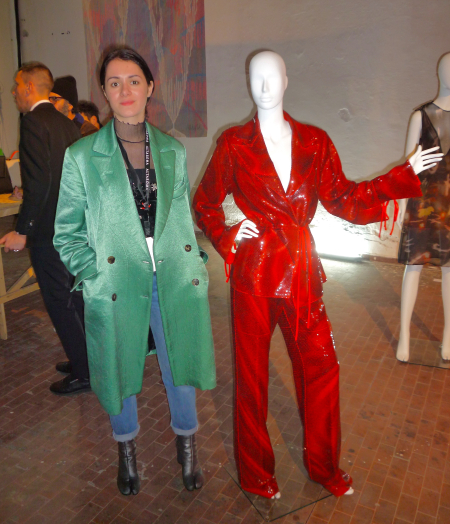 Jezabelle Cormio at the opening night party. The Devil Is a Woman in this divoon fiery ensemble. (I cannot bring myself to utter the word “pantsuit.” Can we please just never say that word again?) 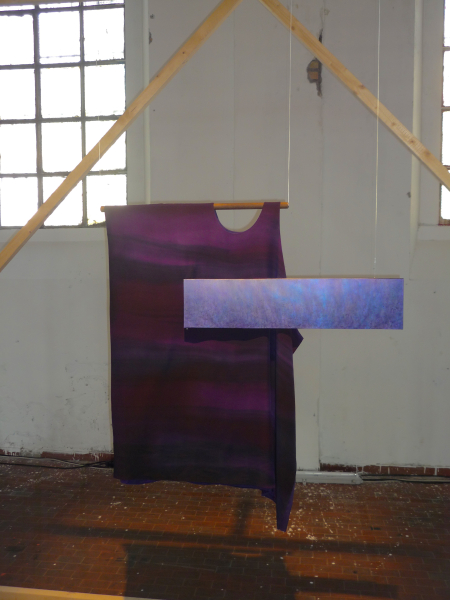 French designer Aurore Thibout collaborated with a Japanese artisan dyer, Akasaka Taketoshi, and artist Makoto Ofune for the poetic pieces shown at “Studio.” Taketoshi, who hails from Kyoto, is a master of the Katazome technique, a Japanese method of dyeing fabrics using a resist paste made from rice flour applied through a stencil. Ofune is renowned for his skilled use of pigments and the representation of the “naturalist subconscious.” Thibout’s textiles are a tribute to the beauty that she uncannily uncovers like an archaeologist. 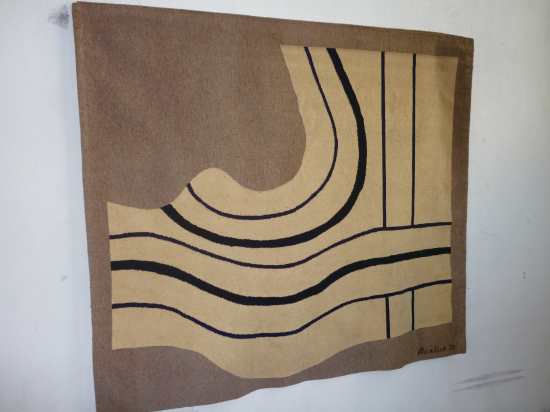 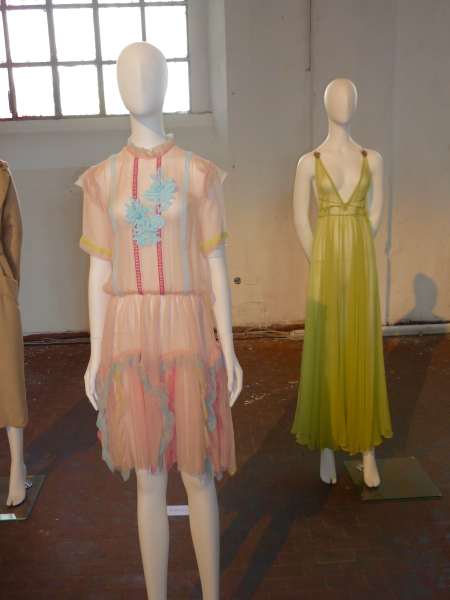 Ethereal innocence from young designer Davide Grillo. Davide studied fashion at the Instituto per l’argianato della moda in Parma, Italy and Central Saint Martins in London. In 2014 he was selected as one of the winners at the Next Generation competition in Milan. After working as a designer for Pinko and Dolce & Gabbana, he founded his own brand in 2016. 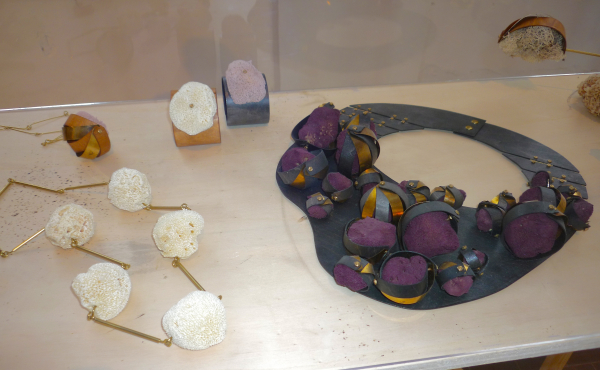 These meteoric marvels from jewelry brand Collanevrosi were created specifically for this edition of A.I. Dyed sea sponges are used in place of precious stones, along with brass and wood that is cut and painted with techniques used by luthiers (craftsmen who build or repair string instruments). I would love to wear these to the Mermaid Parade next year! 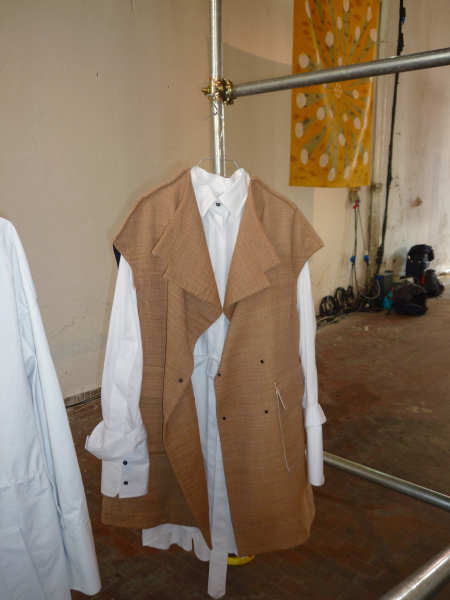 The re-imagining of impoverished sportswear starts here with Ahirain. Made in Italy, the brand’s clothes “speak of change, and a desire to demonstrate the evolution of urban communities and nomadic citizens, constantly on the move.” 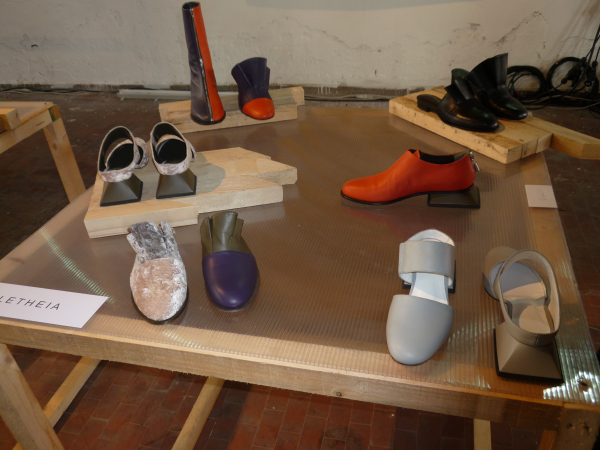 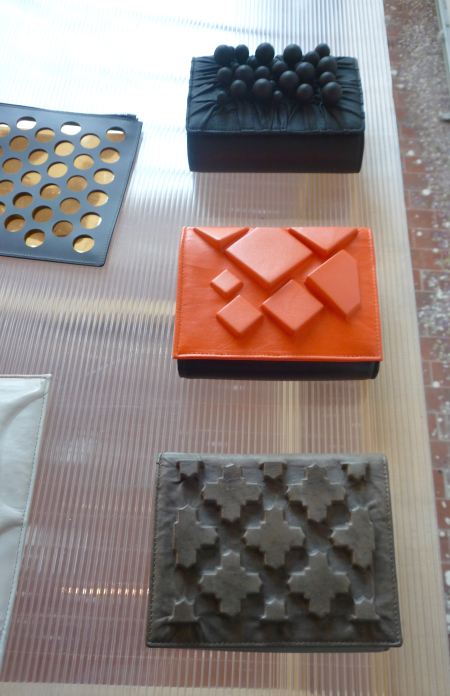 I was over the moon (you’ve been waiting for me to say that) for these quirky sculptural bags by Forms Studio. Founded by architect Anastasia Komarova in Moscow in 2011, the brand’s bags feature tech-manipulated leather that takes on a highly tactile quality. I’ll need that orange bag for my first moon landing; the black one will look quite chic during my next holiday on the astral plane. 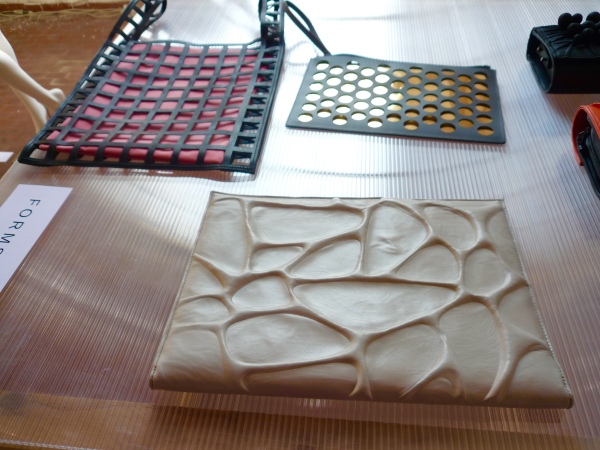 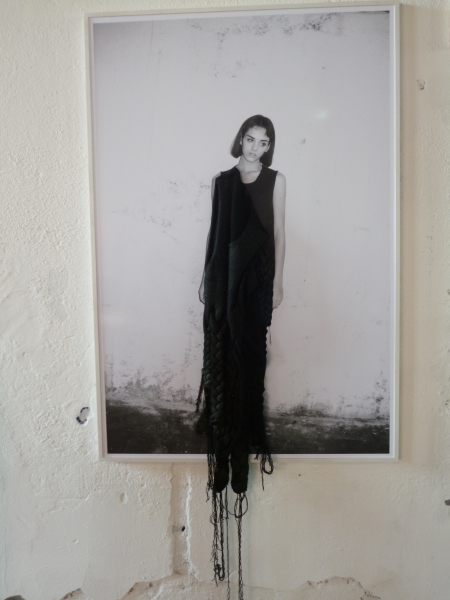 Maria De Ambrogio and Stella Tosco, designers for the brand Serie Numerica, presented clothes and artwork that seemed to come to life on the walls. 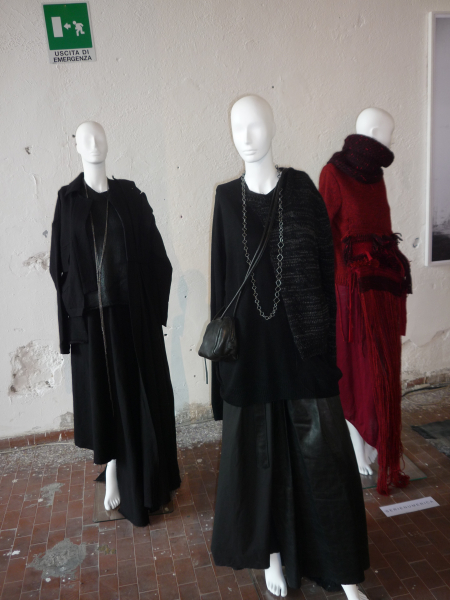 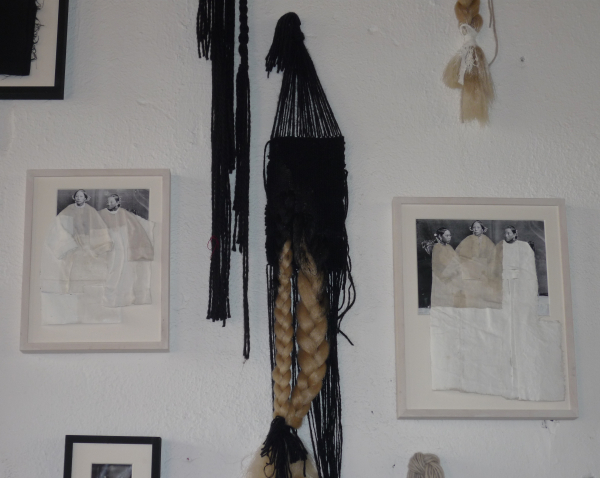