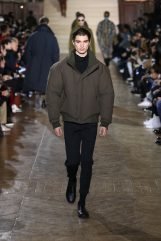 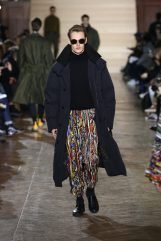 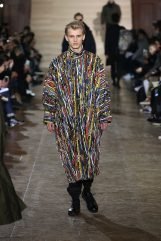 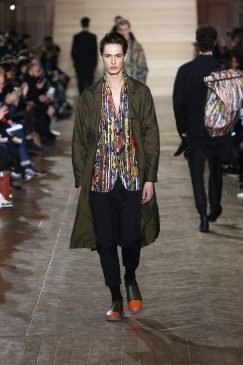 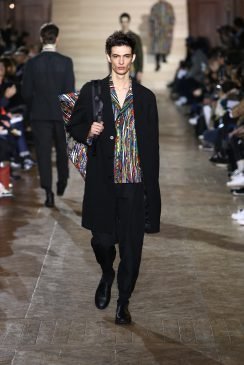 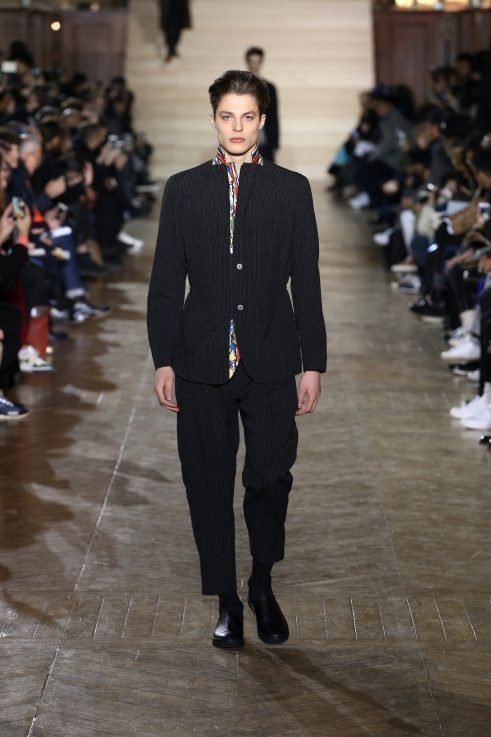 The polar temperatures that have descended upon Paris encouraged a brisk walk rather than a contemplative stroll through the Jardin des Plantes to reach Issey Miyake’s fall venue in the Mineralogy Museum. But the profusion of trees prefigured the Forest that designer Yusuke Takahashi printed in pixellated letters on his invitation.

Just this week, Paris’ mayor Anne Hidalgo made mandatory a sticker that classifies vehicles depending on their environmental impact, after controversially working to close for good the express roads that sinewed on the Seine’s embankment and which allowed drivers to traverse Paris in the wink of a speeding eye. And just that very morning, the news that most of our primate cousins are likely to become instinct in our lifetime made headlines. A thought that was even more chilling than the frigid across these gardens also home to the Menagerie, the Entomology and Paleontology museums was that soberingly, the Grande Galerie de l’Evolution housed a staggering number of species that have become extinct since humans “discovered” them are showcased. More than ever, the environment is becoming both an endangered commodity and a luxury.

Issey Miyake under Yusuke Takahashi’s tenure has nature firmly in mind – this isn’t the first collection to touch on ecological notions – but it is a remarkably restrained beast. Shapes in this “mobile workwear” are kept within the realm of functionality even when taking some of the overarching trends going around the runway for a spin – one full length puffer coat, roomy jodhpurs shapes and a rash of generously proportioned outerwear came to mind. Muted natural hues, well suited to the winter season, were occasionally shot through with vivid blue, russet tones and a mottled assortment of all of the above. None of it was particularly bulky, even when volumes ballooned. As a finale, the cast reappeared in an assortment of nylon overcoats. Once again, the designer advocates treading lightly with active-minded pieces that are elegant enough to pass muster as one tears around an urban vista on a daily basis.

“Hear the call of the wild” said his show notes. But that call has recently become a distressed cry. What could be surmised from Takahashi’s proposal felt like a commentary, albeit one couched in all the politeness that a Japanese person can command. One conclusion to be reached from the continued innovations pouring out of the brand’s founder and his Reality Lab every season is that nature and progress need not be opposed so harshly.

Beyond these notions, there is a necessity of relevance in any designer’s work. With Takahashi ticking the major boxes of what is expected of menswear today, and reaching for that with a distinctive vision that signs both his work and the house he works for, it’s clear that Issey Miyake is out of the woods. But sometimes, that ever-growing thicket of ideas is lost for people looking at each individual tree with puzzlement.