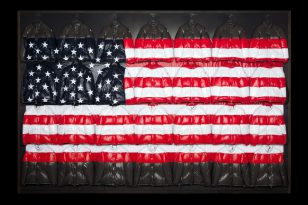 Moncler: A Tribute to New York with an installation of the “USA Flag” by Thom Browne

Moncler has opened its first American Flagship store and pays  homage to NYC with an installation of the “USA Flag” by Thom Browne which consists of 28 special edition jackets with the American flag as their common theme. All of the jackets are the same model but different from each other, they are  unique and numbered and will be sold for charity online at www.moncler.com. The 600 sqm boutique was designed by the French architects Gilles & Bossier.

The New York Director Spike Lee takes Moncler’s message of love, admiration and respect for NYC in a short 5 minute Musical Film. The title of the film is “Brave” and stars dancers Lil Buck, John Boogz and Damaris Lewis. “I deeply believe,” Spike Lee stated, “that New York City is The Greatest City on this God’s Earth. I am A Storyteller. And I decided to Film on a sweltering muggy August day, probably the Hottest Day of The Year.”