Part of the latest Sangue Novo showcase, which gives upcoming young designers the ability to showcase their graduate or debut collections during ModaLisboa’s official schedule, João Oliveira delivered an intriguing take on sportswear staples, using contrasting white strings on several pieces that recalled retro sneakers, as well as bondage rituals. Working with an extremely oversize silhouette, Oliveira caught the attention of the audience with his distinctive use of technique and fabrications, from treated cotton and nylon to solid jerseys enveloping the body. If his garments appeared twisted and subversive at first, they were nevertheless surprisingly wearable, underlining his potential. Oliveira won the Fashionclash prize, too, meaning he will get to show his collection -and represent Portugal- in Maastricht next year. 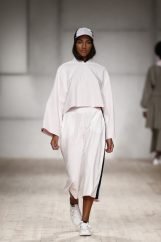 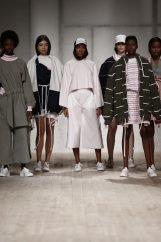 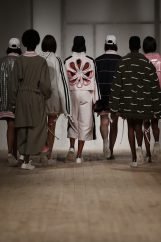