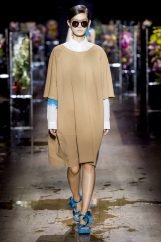 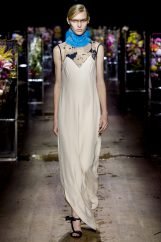 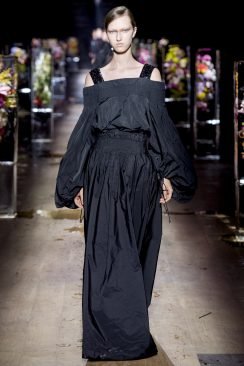 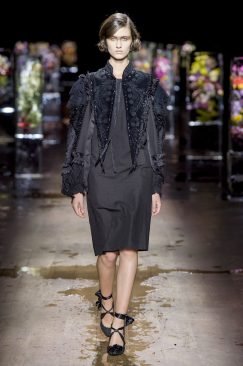 “You only see what your eyes want to see” crooned Madonna as the models emerged for the finale at Dries Van Noten’s spring 2017, walking between the frozen totems by artist Makoto Azuma in which opulents bouquets were suspended. And indeed, all eyes were on those decorations, as if the side show held the key to the Belgian designer’s intent. Or a respite from the sweltering heat that made both guests and ice melt into puddles on the hardwood floor. But sometimes, even the most iconic designer does things just because he can, and as an independent designer, he can quite a lot.
So instead of offering up food for thought along side his striking wares, Van Noten played with contrasts. Consider this: his first look was an immaculate and deceptively simple t-shirt with crisp shorts. The only off-kilter thing was the Victorian-collar that finished it off in an uncompromising black. The final was dark, livened up by the jet glitter of its intricate embroideries. Tailored and flowing, black and white, long and short, masculine and feminine, living and frozen, floral and funeral, past and present, the pairs could be picked easily from one silhouette to the next. Just in the same way, you could see guests mentally checking off what they’d get their hands on come summer: tailored jackets, wonderful silks, the opulently embroidered things. Only the prevailing yellow that seared the retina brought a sense of unease, in the same way that a wasp does, all vivid warning stripes, and hinted that this otherwise delightful mélange had no doubt deeper subtext.
Amid the constant collision course of elements, it was a startling array of wonderfully personable items that looked as great on the runway as it will in retail and on the streets.
So was it necessary to search for meaning beyond the designs, since Van Noten’s wont was to keep it simple Back to Madonna’s song. In a way, let people project whatever they wanted in these clothes. That has always been his main attraction for the world at large: clothes you can definitely see yourself in.