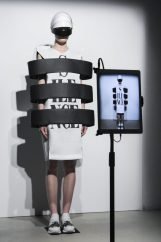 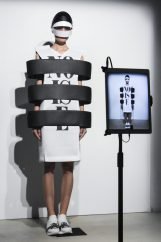 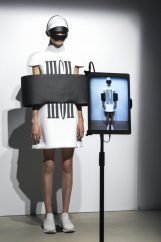 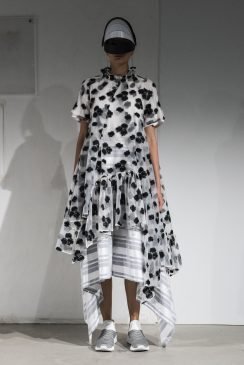 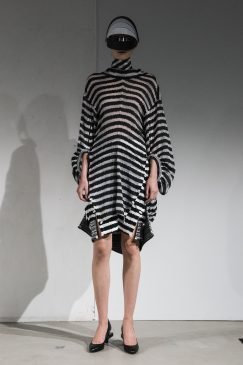 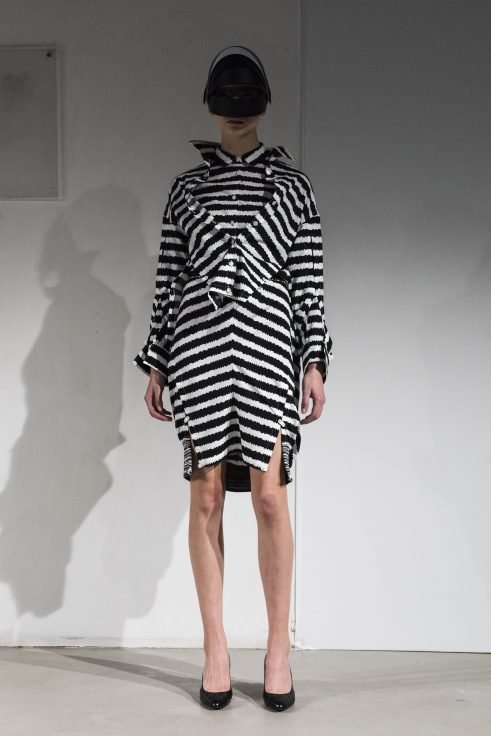 iPads dotted the runway at Anrealage, waiting for Kunihiko Morinaga to reveal what his redacted meant. Of course any guest who bothered download the app mentionned at the back of the invitation had it figured out: augmented reality revealed what was blacked-out. “Silence”, as it is called, was a continuation of last season’s “Noise” and offered the revelation things unseen through the use of screens.
The first group featured pretty dresses, roomy tops and well-cut trousers for a wardrobe that made black and white stripes (in reality black bars running through a variety of subject from crests to florals) a very versatile subject. Particularly pretty were the grosgrain masking tape details which injected structure without adding too much stiffness to these silhouettes. Then came the big reveal. Encircled by thick black bands, models wearing boxy white shifts paused in front of each iPad, waiting for the message to coalesce on-screen and displays the uncensored message. “High”, “Noise”, “Sound”, “Voice”, “Silence” were left to express themselves again.
Beyond the technical hijinks, you could get a read on the underlying thoughts: a thought on censorship and how that relates to our everlasting digital identities; the constant noise that occupies space and removes true meaning… Cue endless debates on our lives lived through screens alone.
But unlike other conceptual brands, that was dealt along with clothes that stood on their own, regardless of the meaning infused in their very fiber.