Thanks to Lydia Kamitsis I have just discovered the work of designer Michele Rosier. I am familiar with the images but had no idea of the French designer who started her career as a journalist for France-Soir before becoming the editor-in-chief for Nouveau Femina.She left journalism in 1959 In 1962 she launched her own brand called V de V for « Vetements de Vacances, »

. Her fashion career lasted from 62 – 72 before she decided to consecrate her time to cinema. During those ten years she was known as the pioneer of sportswear in France, she was known for her use of primary colors and she was the first to put day clothes in silver and to work with experimental fabrics like vinyle and nylon-plume for active sportswear. How is it possible with all her mastery of textiles and design that, till now, I did not recognise her name. I am a little red face about that but I thank Lydia Kamitsis for the introduction. And by way of introduction in the book was written by Jonathan Anderson who discovered her a few years ago and celebrates her mastery. Here are a few pages from the book. 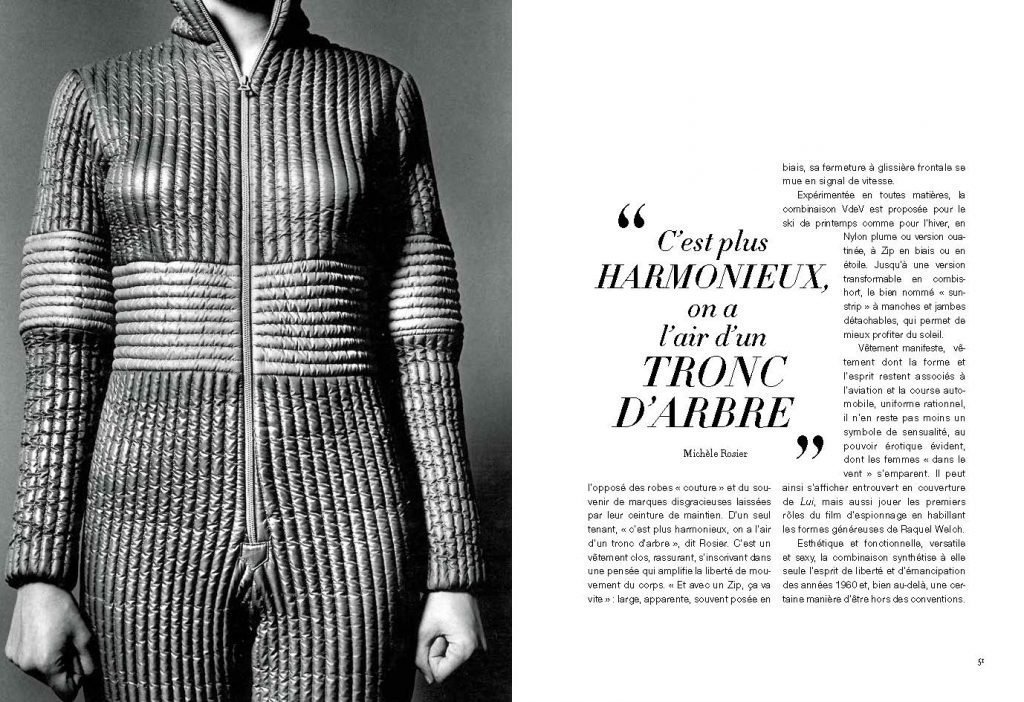 Above in what she called the air of a tree trunk which she felt the most harmonious with nature.

Michele Rosier was considered the Plastic Queen. A quote from her in the book “I would like all women not to be afraid to dress like their refrigerator and car and not like their old armchairs.”

A little practical information: the book is published by Editions du Regard. It will be out any day now. Lydia Kamitsis is a fashion historian and director of research at the Sorbonne.She was a  curator at the Union Francaise of the arts of costume and then at Musée de le Mode et du Textile in Paris untill 2003. She is an author and the curator of numerous successful exhibitions such as Christian Dior: The magic of fashion at the Powerhouse Museum in Sydney, Madeleine Vionnet, the years of innovation at the Textile Museum in Lyon and acts as curator at large for the Museo de la Moda at Santiago, Chile. I could continue but suffice to say, go out and get the book. ….

. You will marvel at the work of Michele Rosier and like me, wonder how it is that you never heard of her.