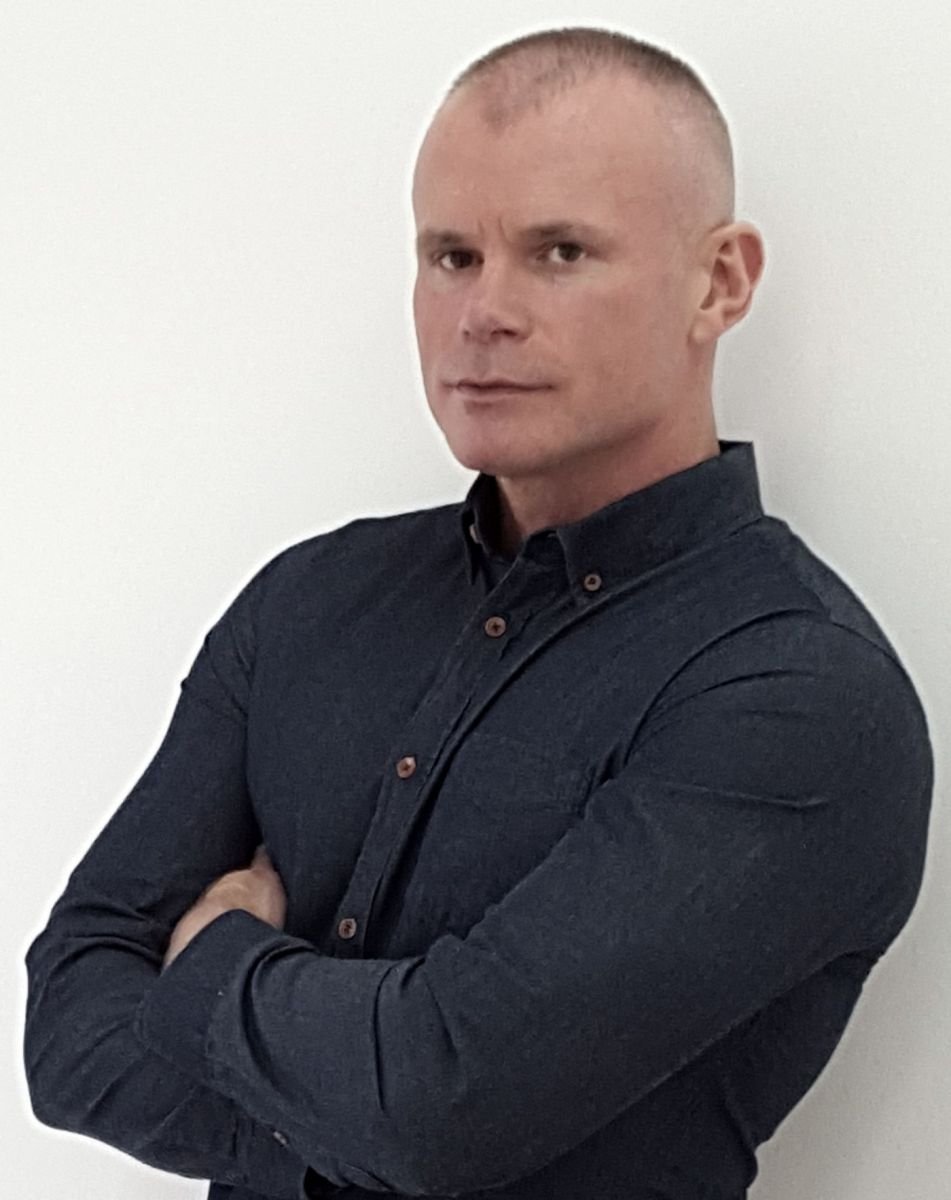 One of the things I relish about my life is the opportunity for transatlantic reunions with old friends. I hadn’t seen Mark Simpson—the British culture critic who is known for, among other things, coining the terms “Metrosexual” and “Sporno”—since we attended 080 Barcelona Fashion in the spring of 2009.

When I announced I would be having my birthday celebration in Rome last month, Mark stowed away on a puddle-jumper to join me in the Eternal City. On our musts lists was, of course, visiting the homoerotic statues at Foro Italico. We decided it was a splendid location to conduct an interview for Diane’s site, so we planted our tuchases beneath the cornucopia of ass-tastic Fascism that surrounded us….

Glenn Belverio: After all these years of talking about it, we’ve finally rendezvoused in Rome. What are your impressions of my favorite European city?

Mark Simpson: It suits you, Glenn. And I love Rome, of course. Who besides a Vandal or a Goth wouldn’t? I’ve been to Italy many times but somehow never visited Rome until now. Though the place seems strangely familiar – like inhabiting a recurring dream. Or a movie.

I wish we’d met up here sooner – we’re now almost as old and crumbly as the Colosseum!

We should make up for lost time and move here – and lunch every day at the mom and pop pizzeria you took me to. The one with the plastic table cloths, strip lighting and framed prints of fighter jets on the walls. One of their pizzas is worth every single overpriced Italian meal I’ve ever had in London.

GB: Credit must go to my dear friend Consuelo Aranyi of AltaRoma for introducing us to that beloved, old-school Roman pizzeria, which she lives near. I am still dreaming about that pizza with prosciutto and olives. But let’s not forget that we narrowly escaped a trendy culinary ordeal at one of Rome’s new, hyped “hipster” restaurants. I can’t remember the name of it, but the gimmicks include paper plates which you take from a drawer in your table, cold metallic clinical-chic décor, “laboratory of ideas” branding, and a self-serve “organic” buffet at table-service prices—all served up by 31-year-old generically bearded “Brooklyn”-branded chefs with incalculably high numbers of Instagram followers. What are some of your thoughts on the global scourge of so-called hipster culture?

MS: People with beards should not be allowed to prepare food. Or eat any.

‘Hipster culture’ is oxymoronic, of course. Hipsters have no culture. They just have a Tumblr and a trust fund.

I’ll bet that place you went to had a huge black and white print of Brooklyn c. 1954 covering an entire wall. Brooklyn is hipsterism’s Rome. Every hipster joint I’ve been taken to – I would never CHOOSE to go to one – has had one on the wall. Doesn’t matter whether you’re in Manchester, Amsterdam or Barcelona they’re all exactly the same and exactly annoying. They’re all McCool. And they all have those annoying ironic industrial metal clipboard menus that they all think are really kooky and idiosyncratic that you just want to hit the over-familiar deliberately-inefficient waiter over the head with.

In case I haven’t made my hostility entirely clear, hipsterism is cultural zombie-ism. It’s the end of the fucking world. Goths and Vandals without the style, or the sex.

GB: As the man who coined the term Sporno, how does it feel to be here (Foro Italico) in what I feel is the ultimate arena of pornographic athleticism? Did it live up to your expectations?

But as with Michaelangelo’s David, it’s very important to go around the rear of these statues. You’ve seen how the buttocks of these athletes are divinely detailed and just go on and on and on forever… Sorry, I’m feeling dizzy….

Did you note that one of the statues is signed ‘A. Buttoni’? It’s just too perfect. Even if the smutty pun doesn’t work in Italian. 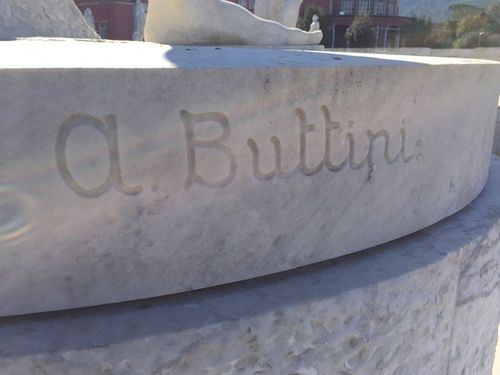 One can almost see a young Mr Dolce and Mr Gabbana here with a packed lunch taking lots of notes – and rubbings. It was, as you know, Dolce & Gabbana underwear ads in the noughties, that did the most to spread sporno – that spurting advertising aesthetic – to the masses.

The sluttiness of these statues wasn’t part of Il Duce’s plan of course. They are meant to represent strength, activity, virility, purity and the imperial triumph of Rome – and identify fascism with these things.

But the sculptors, very understandably, got carried away. Foro Italico – or Foro Mussolini as it was originally called – is a scandal. A wonderful, spornographic scandal. 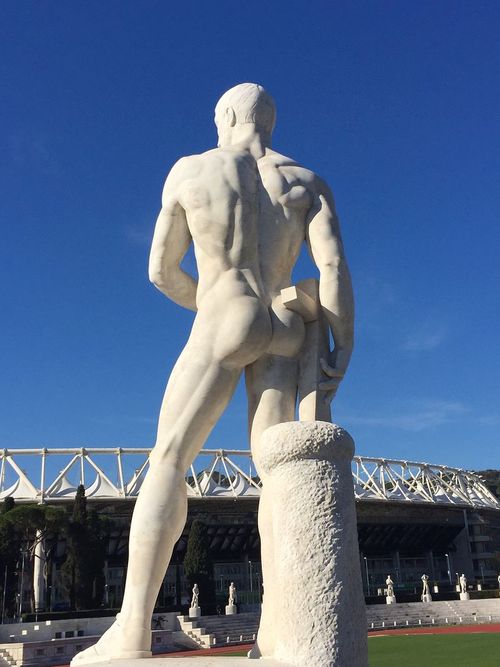 GB: I wanted to make sure you got the full Rome experience, so I’m glad we made it the Pope’s weekly address, even if the proceedings seemed to be marred by a bizarre and mediocre halftime performance. How did you feel about the Pope Francis Show?

MS: Thanks for organising that with Francis. It was the perfect way to start my visit to Rome, seeing the current Roman Emperor, ‘Pontifex Maximus’ – ‘Maxi’ to his friends – addressing what’s left of the Roman Empire, surrounded by Bernini. Though I could have done without the rotund nun in front of us repeatedly standing on her chair to take panoramic video clips of St Peters’ square while Francis was speaking. I thought it very disrespectful. To me.

Francis’ address was wonderful. Well, it sounded wonderful, because I had no idea what he was saying. I miss the Latin mass for the same reason. I also liked the way the cardinals from the far corners of the Catholic world read from what looked like high-class restaurant menus. And did you see how many cute priests there are? I thought all the cute priests were in that tarty Calendario Romano. I was so wrong.

The less said about the US cheerleaders the better. Why couldn’t they have booked those topless north African male acrobats that Ratzinger dressed with his eyes?

It’s a shame we didn’t get to visit the Vatican museum. They have one of the largest collection of Antinous statuary in the world. As you know, Antinous was Hadrian’s beautiful young male lover who was deified after his untimely – or possibly timely – death, and became a popular cult, for a while giving the Jesus cult a run for its money. Some argue that this is why the early Christian fathers railed against sodomy so much – their dead young man wasn’t as cute.

My favourite part though was probably the taxi ride to St Peters – not just for the experience of the Roman way of driving, which had me, an agnostic, crossing myself, but the way stepping into that ‘lived in’ taxi was like stepping into the friendly middle aged female driver’s slightly untidy front room. The way she gossiped loudly on speakerphone to someone back at the taxi rank for the whole journey had me wishing my Italian was so much better.

GB: I had almost forgotten about that taxi ride! I adore tough-talking women cab drivers, a phenomenon which strangely doesn’t seem to exist in New York City. I also remember a few years ago a proliferation of hot, young male Roman cab drivers, but haven’t seen them in awhile. Perhaps they’ve found better lives being kept by some sugar-daddy priests who live above that gay sauna, Europa Multiclub.

MS: Ha! They’re probably being kept by thousands of sugar daddies. They now have their own Instagram – and do private cam shows…

I’m shocked to hear that NYC doesn’t have any tough-talking women taxi drivers! As you know, I am unnaturally fond of ‘On The Town’ (1949) and Gene Kelly’s bellbottoms. But I also love Betty Garret as the wise-cracking, tough-talking Yellow cab driver. I desperately want to believe that she or someone like her is still picking up raucous sailors on leave and letting them know who’s boss and organising their weekend for them.

GB: Morrissey announced recently that the next (or last?) concert he performed would be his last. I know he’s been saying this for a few years but nothing seems to stop him from going on with the show, again. What are your thoughts on the current state of Moz?

MS: Well, I retired myself from Morrissology some time ago. Writing ‘Saint Morrissey’ was a kind of exorcism, after all. But I will say this: maybe retiring wouldn’t be the worst thing in the world at this point, particularly given his recent health worries. Though if he isn’t always touring he will have to actually live somewhere, to ‘settle’ – which may present a problem for someone who has been so peripatetic. Unless he finally throws his arms around the Eternal City! Morrissey for Pontifex Maximus! We could take him to your pizzeria.

I’m sure he’s already been to Foro Italico…. 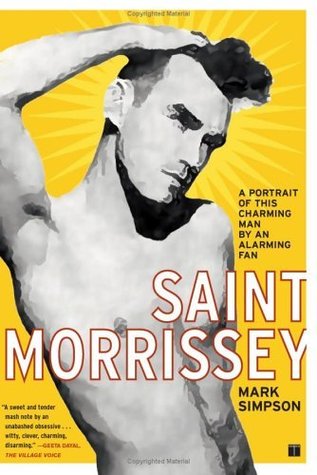 GB: Remember when Morrissey lived in Rome for quite awhile? I wonder why he left? When I saw his show in NYC in 2008 he, of course, took off his shirt and I could tell he had been indulging in a LOT of pasta and pizza. And you can’t blame him. One of my favourite Morissey albums, Ringleader of the Tormentors, was recorded in Rome, as you know.

Anyway, where shall we meet again, Mark? The set Joseph Losey built for Boom in Sardinia? (Elizabeth Taylor was reportedly so tipsy during the entire shooting that she thought it was a real house and kept insisting that she wanted to buy it.) Did we have enough money in our piggy banks to purchase Gore Vidal’s cliff-side mansion in Ravello? Or maybe we can just crash Joan Collins’ birthday party on the French Riviera….

MS: Oh, Morrissey’s lived everywhere ‘for a while’. I suspect that this short-lived ‘Rome’ period was spent in a five-star hotel ordering room service. He needs to buy a flat above our pizzeria.

Ravello, perched on the Amalfi coast, is the perfect place for Belgronis™, and we would be within easy reach of Rome, but how Gore didn’t fall down all those bloody steps and break his neck I have no idea. And all those bathrooms… We’d spend our whole time on our knees scrubbing like Joan Crawford.

Sardinia sounds like a good plan. I’ve discovered the well-kept secret of Sardinian wine during my trip to Rome – Italians love it and make sure none ever escapes abroad.

And who knows? Maybe hipsters haven’t yet reached Sardinia. Maybe – please God – it has a really slow internet connection.

GB: Sounds like a plan! And now I’d like to direct our readers to your wonderful website so they can partake of some of your saucy essays… 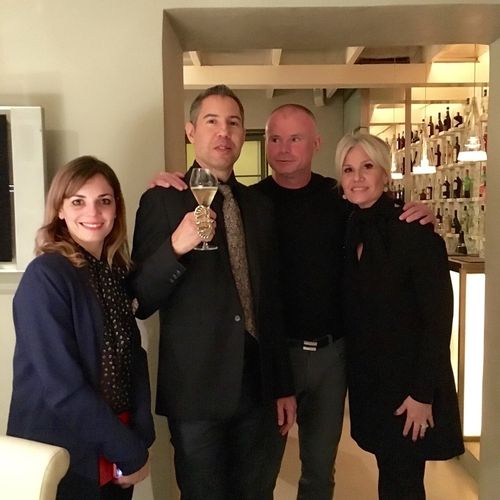