I met designer Nile Cmylo last May while I was hanging out at the end of the bar at El Quijote, sipping one of Santi’s legendary Negronis. As is my wont, I was watching and eavesdropping on the imbibers sitting across from me. On this occasion they happened to be a blonde girl and a striking woman with long purple hair, who was chatting animatedly about her life as a fashion designer. When her mobile rang and the ringtone was “Blitzkrieg Bop” by the Ramones, I thought “This chick is boss, we need to be friends immediately.”

El Quijote is one of the few places in NYC where I chat up strangers (most other bars are full of cleverless, solipsistic kids) and, as I’m usually fortified by a couple of Negronis, the conversations flow easily. Nile and I talked for hours about everything under the sun, including how she’s been living in the Chelsea Hotel for 26 years. A couple of years ago, VOGUE published an article about her, which is a great read. You can see it here.

I often drop by Nile’s pad for cocktails when I’m on my way to dinner at El Q, but this occasion was the unveiling of her Fall 2016 collection, “1972.” An eclectic assortment of NYers, including a few long-term Chelsea Hotel residents, checked out the clothes and sipped drinks from Nile’s light-up highball cups at what was surely one of the high points of this New York Fashion Week. 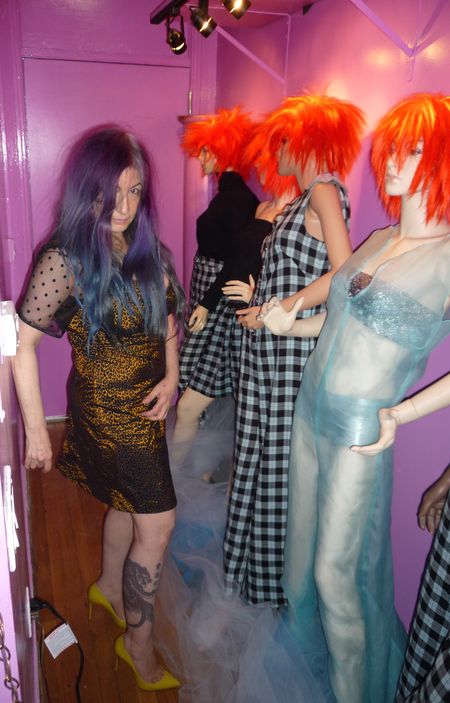 Nile poses in the hallway of her apartment, next to some looks from her new collection. She had this to say about it and herself (and now you can imagine me in a hand-me-down Warhol wig brandishing a creaky, cumbersome tape recorder, capturing her every word..):

“I am educated as a costume designer as well as a fashion designer. Costume design involves period dating and I have started applying that to my fashion design. This collection is 1972 in a tribute to David Bowie. It would be dishonest not to acknowledge what a big influence his androgyny and music has had on my life and my designing. This is the first capsule collection I created in my newly renovated Chelsea Hotel apartment. I was so happy to be able to try my hand at interior design and worked closely with architect Allysa Taylor. We vibed well together as both of us think creatively turning two dimensional ideas into three dimensions.

One of our best moments involved building the bathroom. I designed a sink to be built into my vintage vanity – Allysa had the architectural chops to execute. She brought her own architectural design to the execution and took a chunk out of the vanity to accommodate the sink. It was a tight squeeze to get into bathroom with the vanity so Allysa extended the bathroom wall a few feet into what was a hallway whose only function was to get to the bathroom – the added feet in the bathroom exponentially expanded the bathroom and I got my dream bathroom with two sinks!! (One shampoo, one vanity) I designed my apartment from a period dating perspective – 1966 – and now that I think of it – I carried this process into my fashion designing which how I arrived at this collection from 1972.” 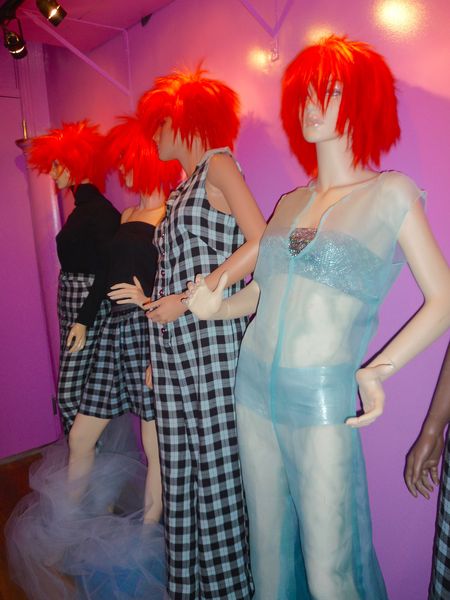 The light-blue tulle at the mannequins feet: David Bowie in Heaven. 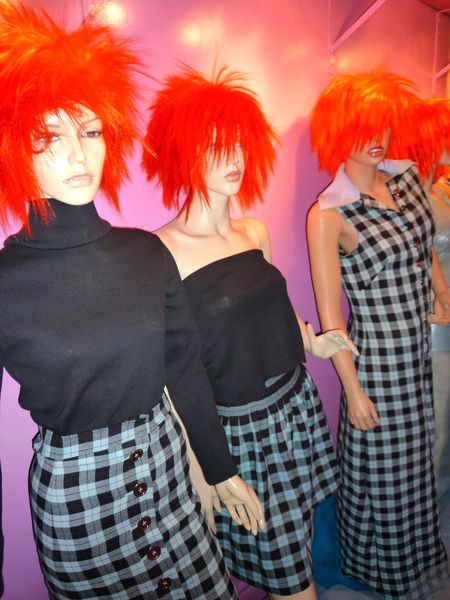 I’m loving the tartans and the sophisticated tone of the clothes. Nile dyed the black-and-white tartan fabric for a lovely powder-blue glow. 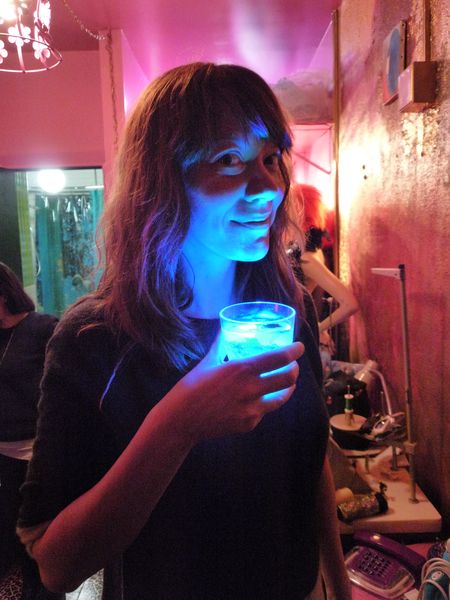 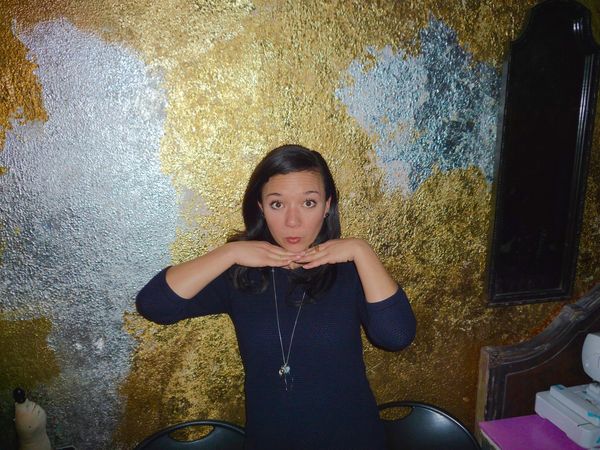 Architect Allysa Taylor who worked with Nile to renovate the apartment. The gold-patina-ed walls were a long work-in-progress that Nile began 25 years ago. 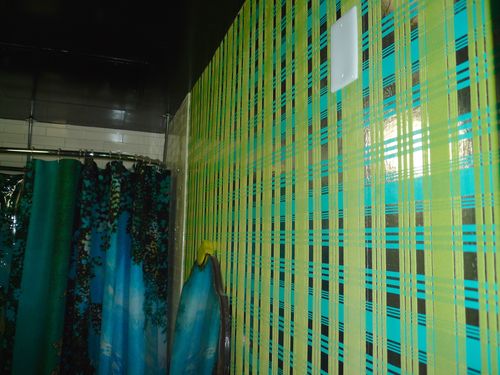 The bathroom wallpaper is vintage ’60s from Suzanne Lipschutz of the shop Second Hand Rose. 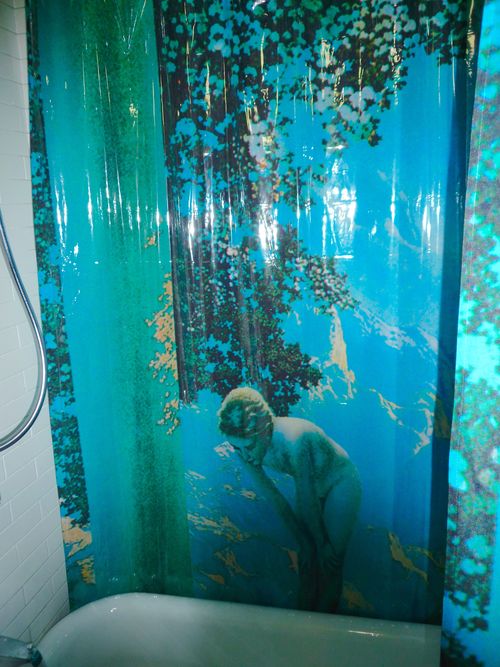 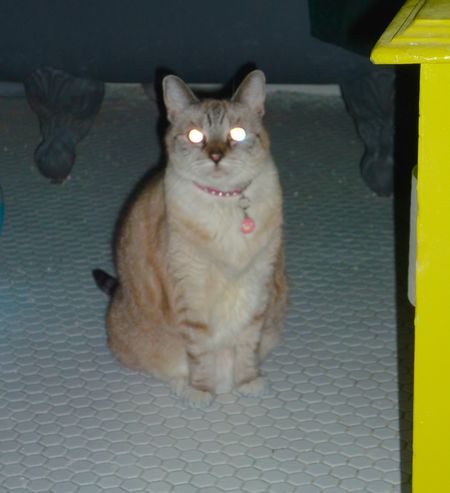 “I want to be alone.” Jezebel hung back in the bathroom during the soiree. Her name is partially inspired by the rumor that Bette Davis once stayed in this room at the Chelsea. 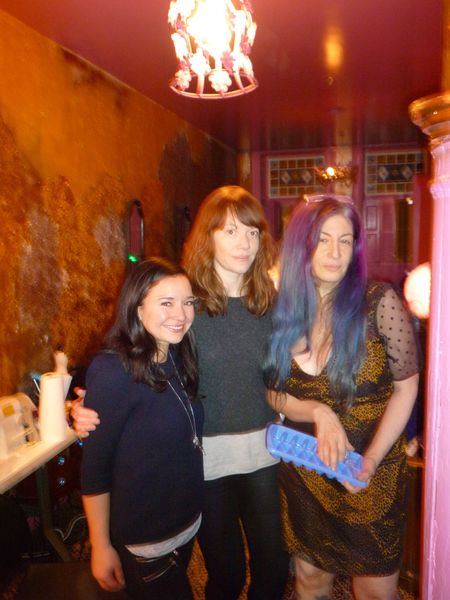 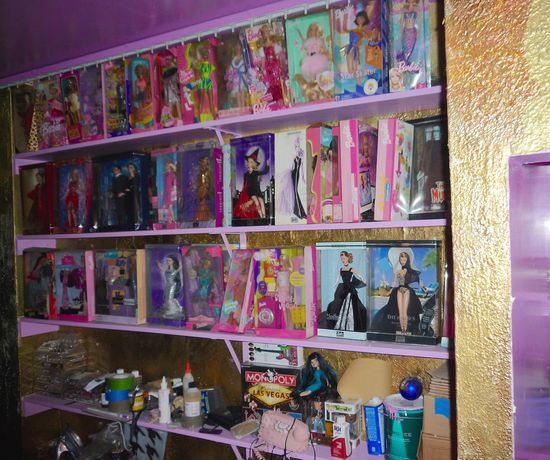 The Wall of Barbies.