A very rare Studebaker Avanti, manufactured in Palm Springs in 1963

The Coachella Valley Savings and Loan by E. Stewart Williams, 1960, reminded me an awful lot of Oscar Niemeyer’s buildings in Brasilia

During my desert holiday in late January, my itinerary included a whirlwind tour of mid-century modernist architecture (Palm Springs has one of the world’s largest and best-preserved concentrations of it) and homes of Hollywood stars. The best and most comprehensive way to do this it to book a 3-hour tour with Palm Springs Modern Architecture Tours. Covering a wide area of the city, the van ride travels from Little Tuscany to Las Palmas to South Palm Canyon to Araby Cove and beyond.

Our tour guide was Palm Springs Modern founder Robert Imber. An impressive and exhaustive fount of information, Robert is a longtime visitor and 10-year resident of Palm Springs. He’s a trustee of the California Preservation Foundation (CPF) and a vocal and active advocate of architectural preservation for over 25 years.

Since a lot of ground is covered on the tour, you don’t get out of the van (and you don’t enter the homes, most of which are privately owned) but it does stop in front of many of the locations so you can take pictures. Because the windows of the van are slightly tinted, you may notice that my photos give you a “shaded view” of some of the sites. Here is side view of the iconic and meticulously restored Kaufmann house (yes, the one that appears in the famous “Poolside Gossip” photo). Designed by Richard Neutra, it is widely considered to be one of the finest works of residential architecture in North America (along with Frank Lloyd Wright’s “Falling Water,” which was commissioned by the same family.) 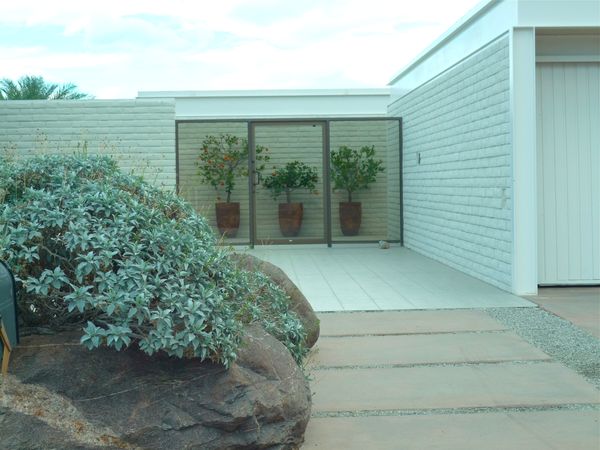 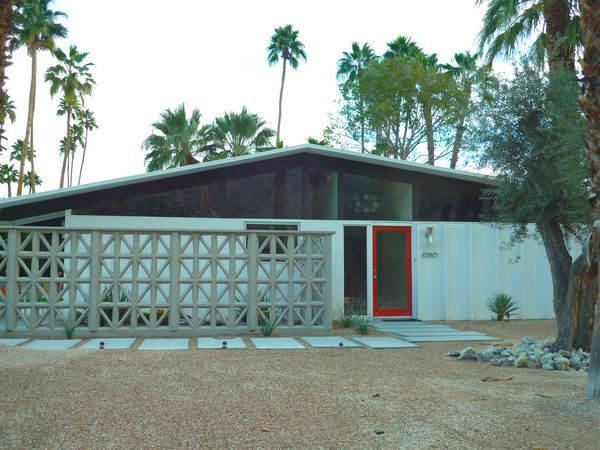 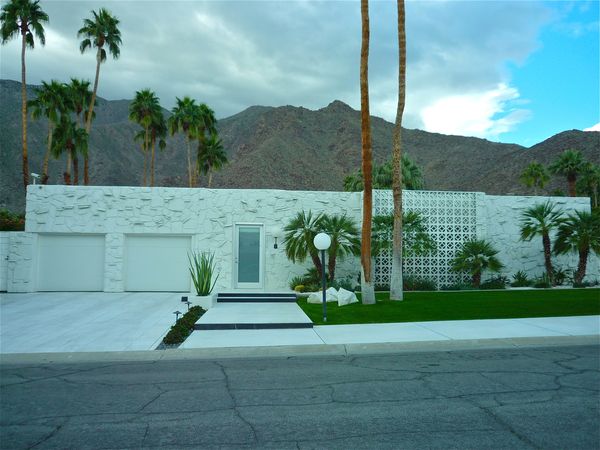 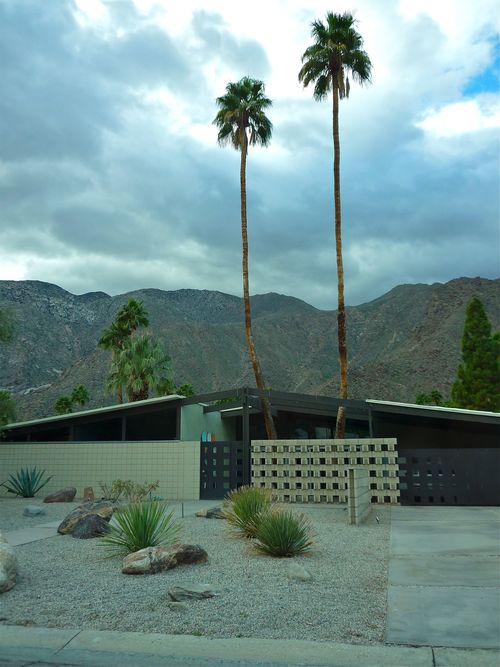 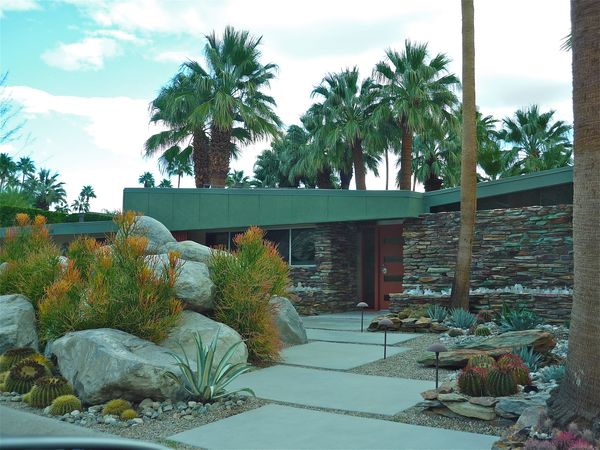 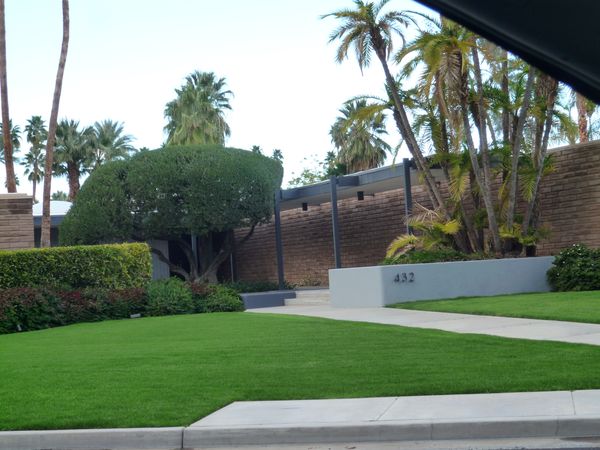 This is Dinah Shore’s former house, now owned by Leonardo DiCaprio.The 7,022-square-foot, 1.34-acre Donald Wexler-designed estate features six bedrooms, a pool, tennis court and detached gym. The “tennis estate” was sold for $4.9 million in 2011 (Leo paid $5.2 mill) and certainly fits the Palm Springs style — wide-open interior spaces with sleek lines and windows all around that open to views of the outdoors with the always-present blue sky, mountains and palm trees. That brick wall was falling apart and need to be renovated–and Leo made sure that the same materials were used so as not to compromise the integrity of the property. 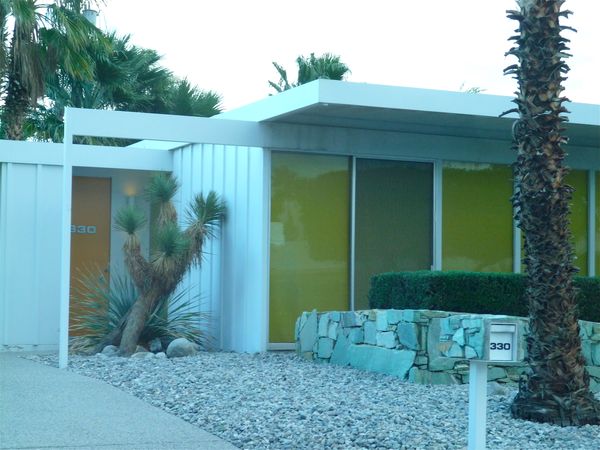 I was absolute in love with these houses. They’re made entirely of steel (the dwellers hang paintings on the wall with magnets) and there are only 7 of them in existence (all in this area) and they now have Historic Site status and have been restored to their original condition. But in the ’70s and ’80s a lot of trashy people had moved into them and did awful things like tack on extra floors or weld metal staircases to the exteriors. Here’s some info I found online about them:

“In 1962, the architects Donald Wexler and Ric Harrison introduced a novel all-steel system for the prefabrication of affordable houses suitable for the desert. The project was sponsored by US Steel, the structural engineer was Bernard Perlin of CalCor, and the builder was the Alexander Construction Company. The steel house tract was located in a remote windy part of Palm Springs, north of the newly built Riviera Hotel—surrounded on 3 sides by empty desert.

The houses were primarily composed of steel and glass—a unique combination of off-site and on-site assembly. Part of the genius of their approach was taking components that had been designed for the rapid construction of school classrooms and adapting them into stylish, custom-appearing houses for the middle class.

The wall modules consisted of an outer layer of light-gauge galvanized steel, a hollow core with gypsum board and fiberglass insulation, and drywall. The 9-by-36-foot central core of the house included the kitchen, two bathrooms, a laundry room, central hallway, and mechanical runs (electrical, ductwork, etc). Theses components were prefabricated in Los Angeles, trucked to the site, and lowered onto the slab by a crane. The outer rooms were then assembled around the core using the prefabricated steel panels, which were fit into a track template in the slab, interlocked, and bolted. The roof, also light-gauge steel, was then overlaid and bolted, supported both by the central core and the outer load-bearing steel panels. Each major room featured 8-foot-high sliding and stationary glass panels. Outer structural assembly took 3 days. The steel houses were impervious to heat, warping, rotting, swelling, termites, earthquake, and fire, and were very low maintenance.”

I absolutely must have one! 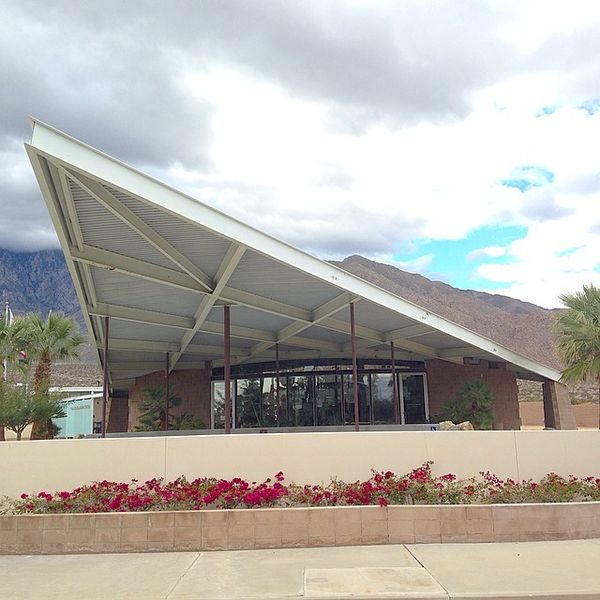 Here’s where the Palm Springs Modern Tour starts, at the Palm Springs Visitors Center. Its soaring, hyperbolic paraboloid roof is a Palms Springs landmark. It was originally The Tramway Gas Station (an Enco service station) designed by Swiss architect Albert Frey in 1965. The station has closed in the mid ’90s and at one point it bad been painted pink and then covered in graffiti. There was a plan to demolish it but luckily it was purchased by a private interest who erected a wall around it and turned it into an art gallery. The city purchased it in 2002 and turned it in the Visitors Center in 2003. 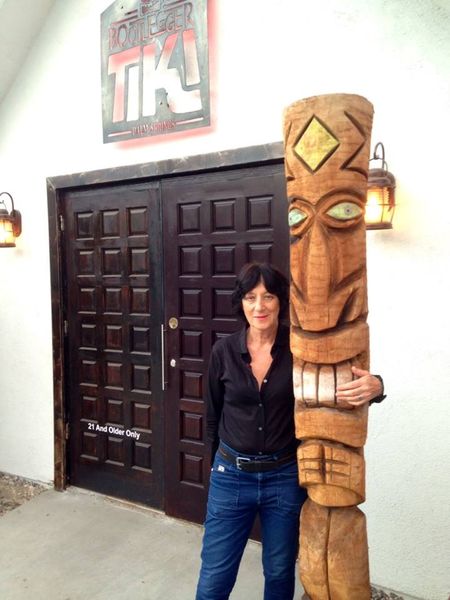 Lesbian rock icon Carole Pope joined me in PS for a few days, and of course we had several cocktail sessions at Bootlegger Tiki, located in the uptown Design District. 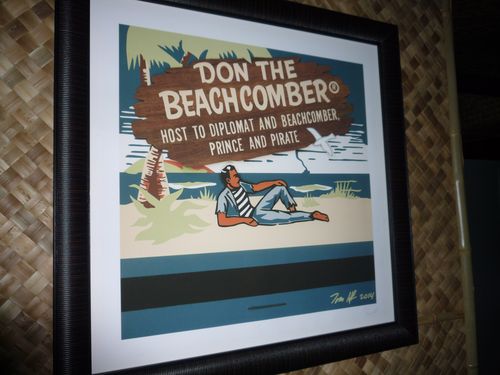 Bootlegger Tiki is located on the site of Don the Beachcomber’s PS outpost, which opened in 1953. Don the Beachcomber arguably invented tiki pop in the U.S. in the ’30s and here he served his trademark Zombies and Cantonese food dressed up as exotic Polynesian cuisine (just add pineapples!). Now, only a small area of the space is dedicated to the old tiki mecca, and Bootlegger Tiki has updated the aesthetic by serving more refined versions of tiki cocktail classics. Of course, I love nothing more than an old-school Mai-Tai at one of my favorite authentic Polynesian joints in New Jersey, but let’s face it: they don’t use a very good quality of rum and the hangover will feel like “Apocalypse Now” moved into your skull. Bootlegger Tiki, on the other hand, has achieved some perfectly balanced and complicated cocktails, using top-notch hooch. 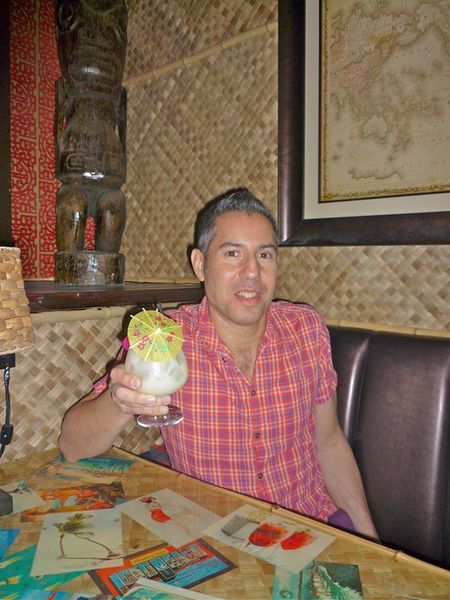 Here I am in what quickly became my daily cocktail-hour booth enjoying what I think is the most delicious cocktail on the menu: the Pod Thai. It’s made with Selvarey rum, house-made cardamom lemongrass syrup, coconut cream, lime juice and Thai basil. 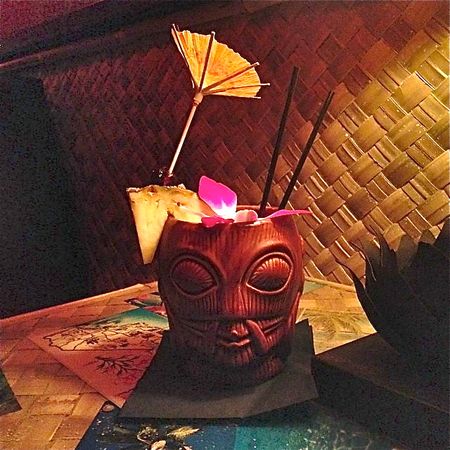 I can’t remember the name of this one…the Drunken Monkey? The Lucky Monkey? But it had dark rum and a dark, elevated tiki taste. A very serious potion. I really loved the detail of the blown-out paper umbrella. Witty! 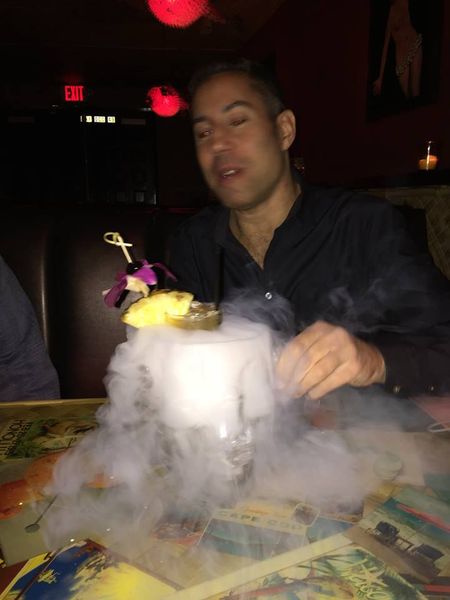 I was spellbound by the Cuba Cola, served in a smoking skull-shaped mug. Double, double, toil and trouble…fire burn and cauldron bubble….give me some hooch and make it a double…. 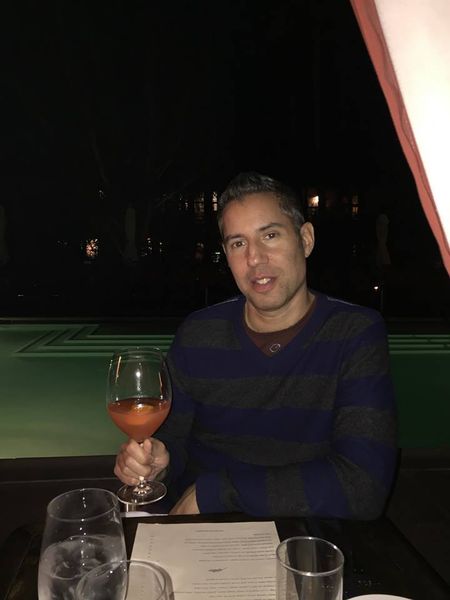 Al fresco dinner by the pool with Carole Pope at the Purple Palm at the legendary Palm Colony Hotel….I’m drinking something called a Burnt Aperol or a Flaming Fagele….divine. 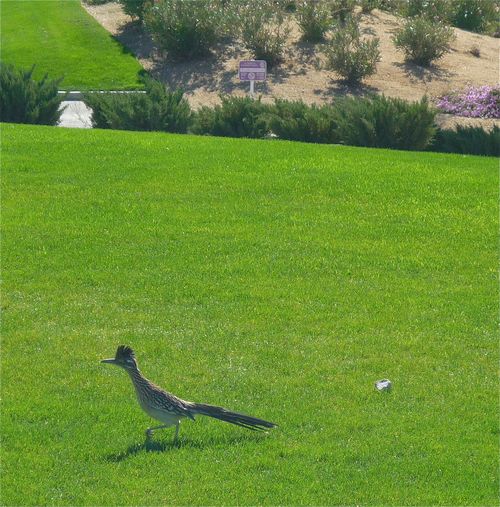 During a splendid golf-course-side brunch with Michael McDonald (the Desert Dandy’s twin brother, both of No. 6 Palm Springs) at the superb Escena Lounge and Grill, we spent quality time with some very chic roadrunners. 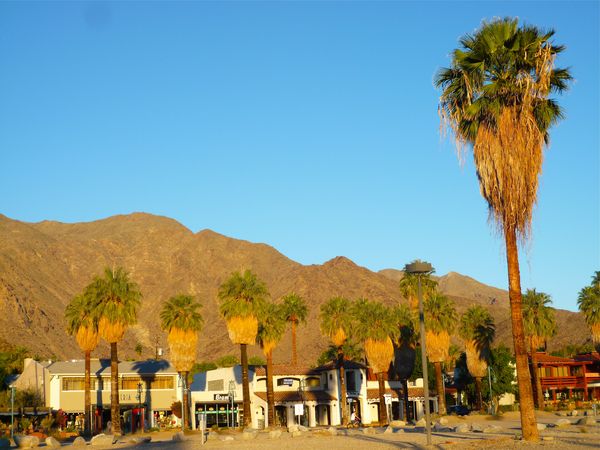