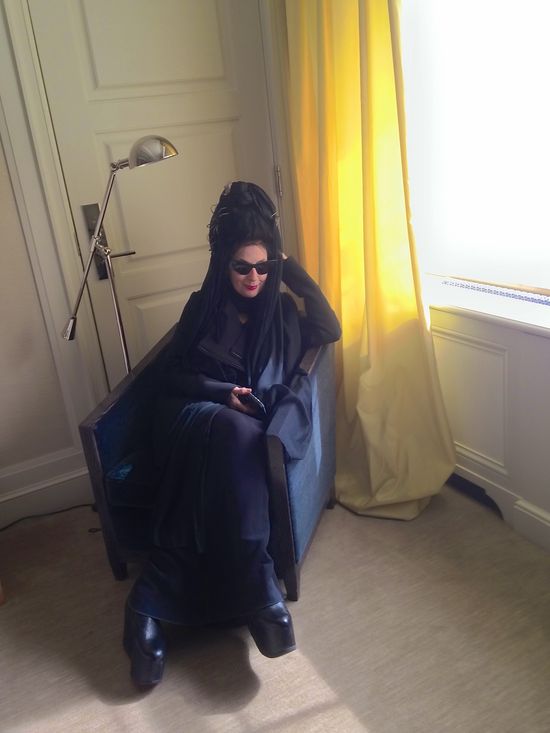 One can’t imagine a better place to hang up one’s mantilla after a long day of fashion film organizing and hosting. The Mark on New York’s Upper East Side, just an Akoya pearl’s throw from Central Park, is “New York’s most boldly lavish hotel.” It certainly lives up to that claim. Three nights in a cavernous suite, complete with two bathrooms and a well-appointed living room, with a show-stopping Jean-Georges restaurant only an elevator ride away, is the sort of relaxing respite one needs amidst the hustle and bustle of this often unforgiving city. 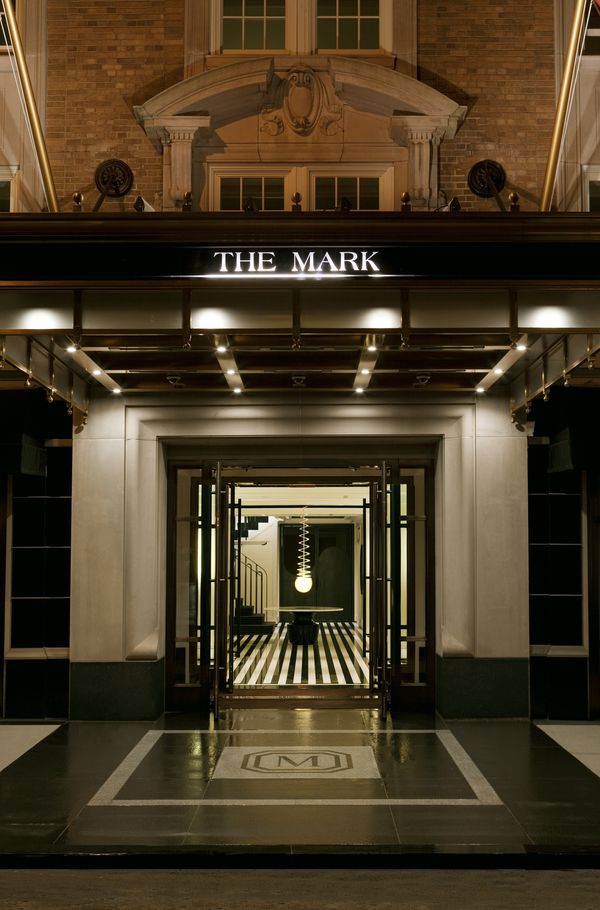 The Mark is housed, as it has always been, in this beautiful 1927 landmark building. But as is a luxury hotelier’s wont, the inside has been transformed with a design aesthetic that is at once soothingly modern and brazenly futuristic. 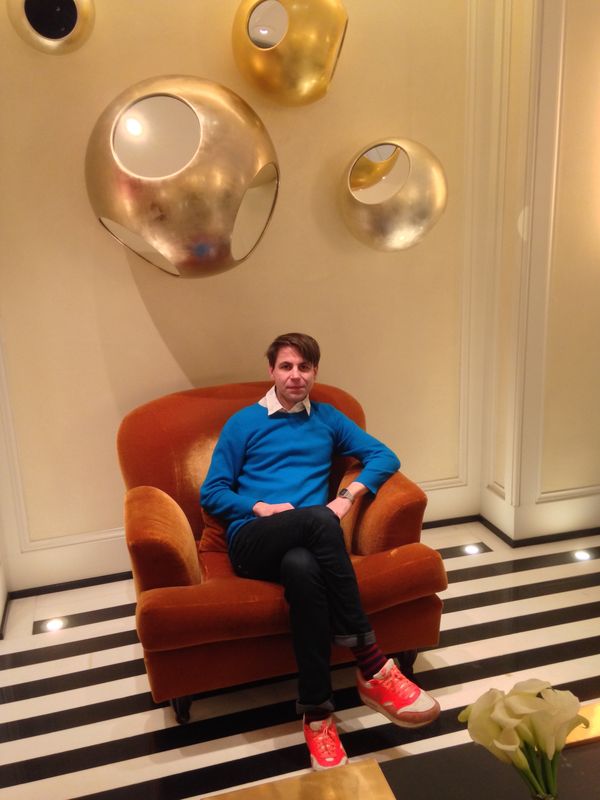 ASVOFF producer-at-large David Herman also stayed at The Mark. Hailing from Paris, it was David’s first visit to NYC–and he told me everything lived up to his expectations (!) 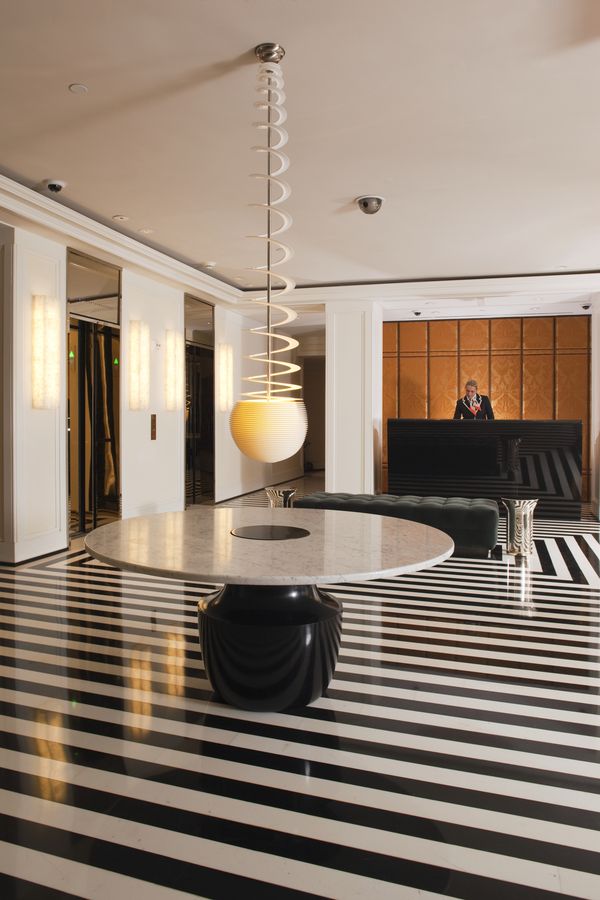 The Mark’s interiors were conceived by renowned French designer Jacques Grange. (His rather impressive client list includes Yves Saint Laurent, Valentino, Karl Lagerfeld and Caroline, Princess of Monaco.) Known for his striking modernity and theatrical flair, Grange has created public spaces for The Mark that engage and delight.

Not only did he oversee and design the furnishings, Grange also collaborated with Parisian design gallerist Pierre Passebon to comission a host of objets d’art, furniture and light fixtures, specially created for the hotel by renowned artists and artisans, including Ron Arad, Vladimir Kagan, Mattia Bonetti and Paul Mathieu. 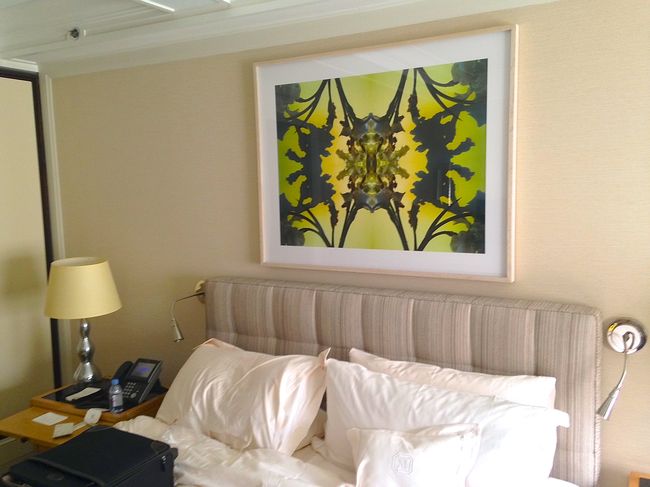 A bathtub fit for a queen….the Queen of Fashion Films! 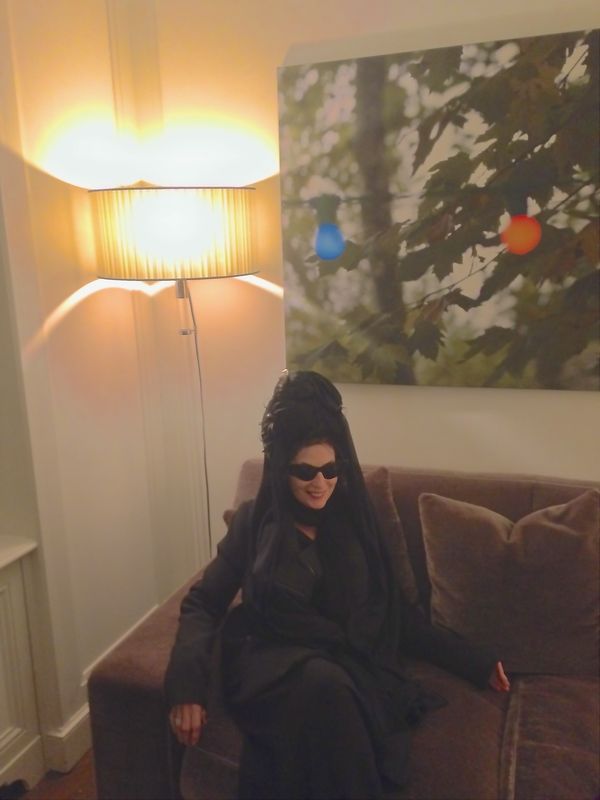 Relaxing in the sitting room, a space full of design surprises… 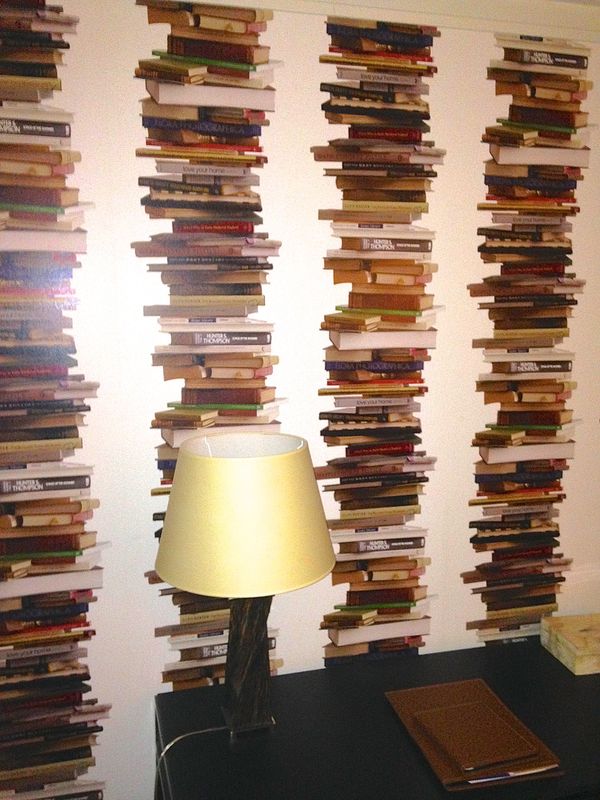 …such as this stacked-books trompe l’oeil wallpaper. Luckily, “books” were not just a design element: to the left were several bookshelves replete with a wide range of fascinating real tomes. 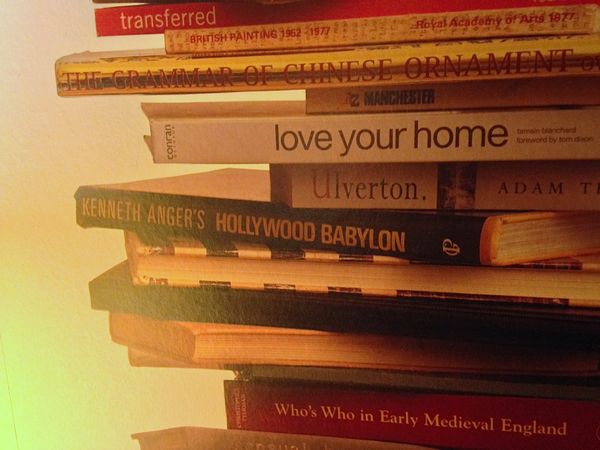 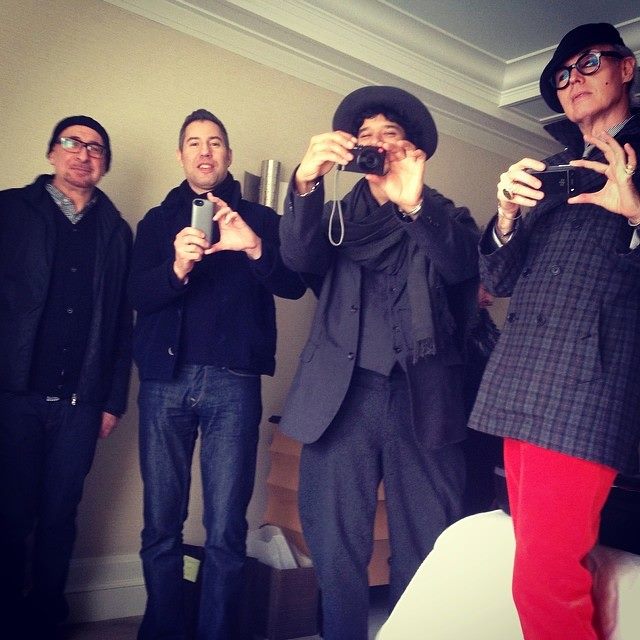 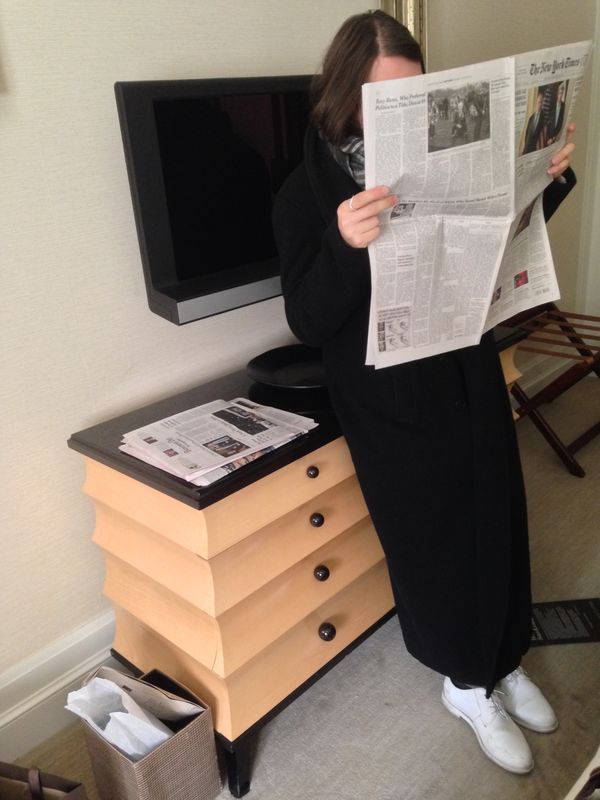 We were mad for the pagoda-motif dresser. Jewelry designer Graham Tabor was busy reading about ASVOFF in the New York Times STYLES section. 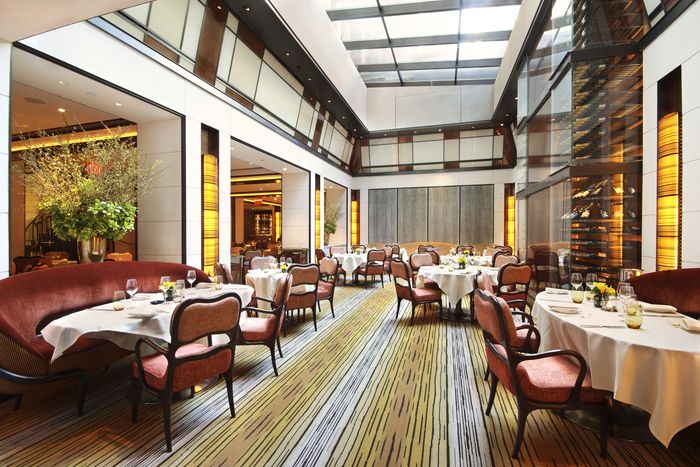 We all gathered for a very lively lunch at The Mark by Jean-Georges. The (diffused and very flattering) light in the room is absolutely beautiful, thanks to the skylight. We were over the moon for M. Vongerichten’s chilled Maine lobster appetizer and apple cobbler dessert. For those who eat meat, The Mark Cheeseburger is a triumph: brie and a truffle sauce that did not overwhelm the burger. 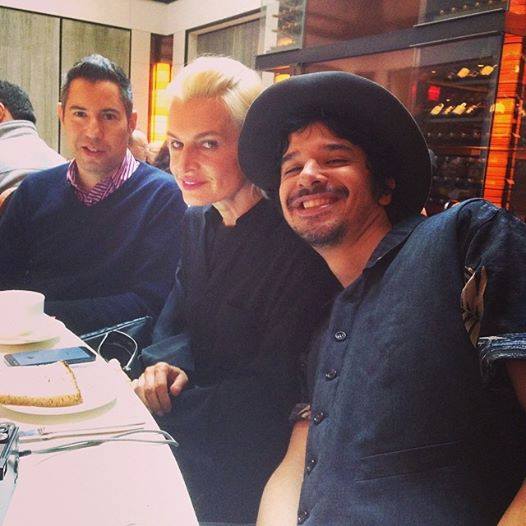 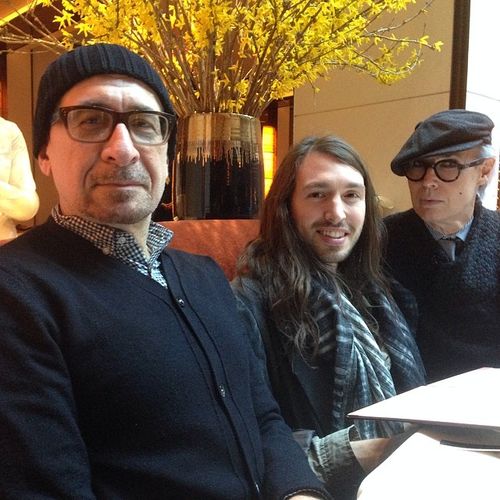 Vincent, Graham and Patrick–a harmonic convergence of creativity, punctuated by a spray of forsythia. 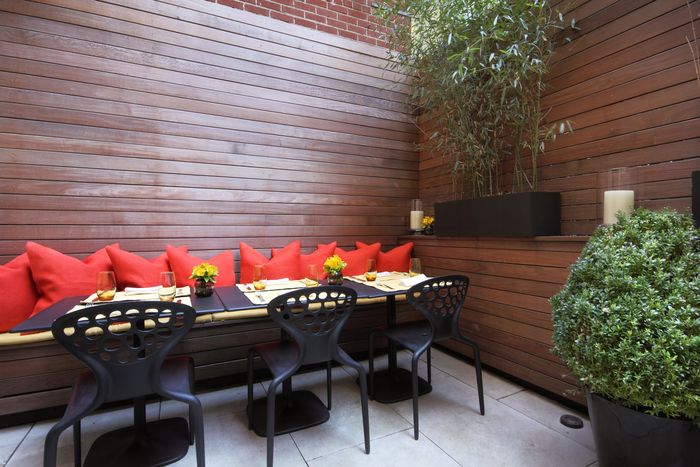 We are all looking forward to the spring and summer when we can dine on the splendid patio. 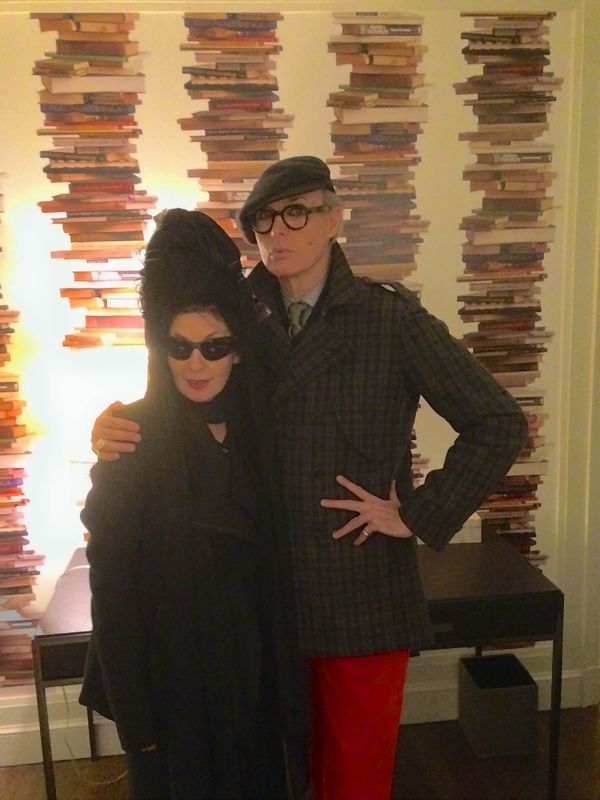 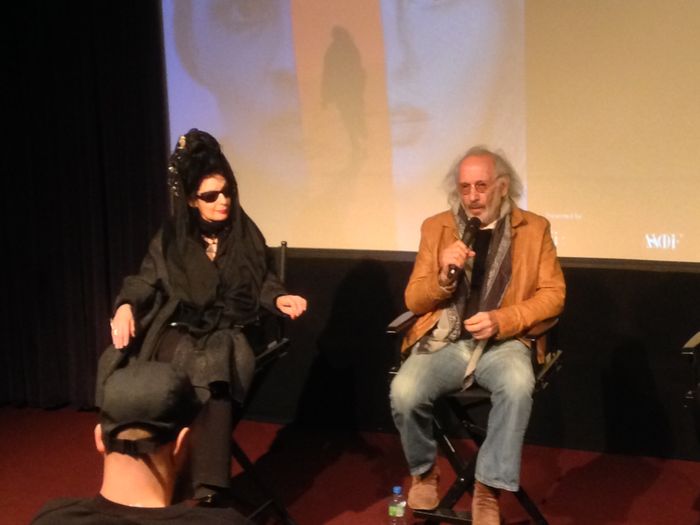 One of the highlights of ASVOFF New York at Fiaf was a rare screening of Puzzle of a Downfall Child and a Q&A with the director, Jerry Schatzberg.