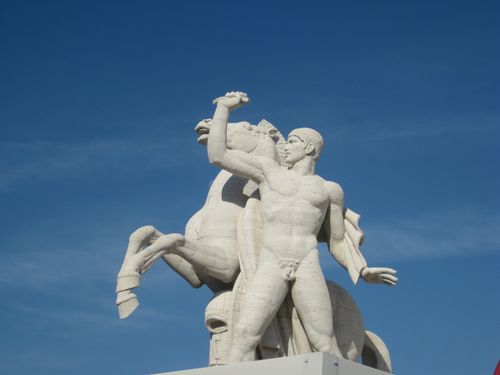 Since Karl Lagerfeld is in Dallas now for a big CHANEL launch, Diane asked me to re-post this story I wrote for my blog and Night Charm a few years ago.

The first time I visited EUR, Mussolini’s failed Fascist wonderland on the outskirts of Rome, was back in July 2001. That was the year the Eternal City’s left-wingers were fomenting dissent in response to the recent re-election of right-wing Prime Minister Silvio Berlusconi. By chance, I met one of said left-wingers at a gay sauna called Europa–but, of course, the only reason I was there was so I could sit in the steam room and sweat out all the champagne I had drank the night before.

Luis, a Colombian immigrant and self-described Marxist/Buddhist, took me on a political tour of Rome which began with the rarely visited Fascist buildings of EUR and ended, more or less, with the socialist/anarchist stronghold of San Lorenzo–the radical-chic ‘hood populated by politically active squatters and students. (Also on the tour, because it was convenient for one of our dalliances, was the apartment that belonged to a former Communist Party senator where sofa-surfing Luis was currently crashing).

Our visit to EUR (pronounced AY-oor and stands for Esposizione Universale di Roma) was a highly memorable one. I was fascinated by the deserted de Chirico-esque ambience and haunted by the often derelict appearance of much of the area. The kitschy Roman Empire-inspired warrior statues that Il Duce had erected around his “square Colosseum” in the late 1930s were stained with age, their pedestals surrounded by sprouting weeds. The only sign of life was a teenaged Italian couple tucked away behind one of the statues engaged in a heavy petting session. After enduring hordes of deplorably dressed tourists and cheesy minstrels in bad gladiator costumes at the real Colosseum the day before, Mussolini’s melancholic, ersatz Rome certainly appealed to me.

The next time I was in Rome, in 2005, it was at the invitation of the Turin Film Commission who had arranged an interview for me with Dario Argento. When the taxi from Fiumicino Airport passed by EUR’s square Colosseum, which is highly visible from the highway, my heart sank: a gigantic banner ad for a mobile phone company hung across the building, reducing its stoic, enigmatic appearance to that of banal scaffolding. Given the average Roman’s blase and unsentimental attitude toward even authentic ancient ruins, however, I shouldn’t have been surprised. 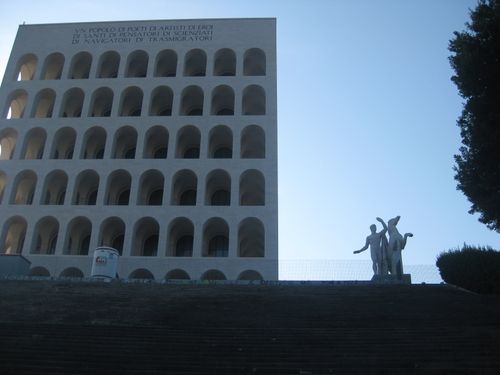 The Palace of Labor Civilization, or “square Colosseum,” in July 2009.

Fortunately when I returned to Rome this July to attend AltaRomAltaModa, the plot to turn EUR into a backdrop for crass advertising seemed to have been foiled. My driver took me there straight from the airport and this time I found the square Colosseum surrounded by a wire fence and evidence of construction and restoration. The muscular statues had been stripped of their decrepit patinas and shone brightly in the sun, while the square Colosseum was as white and polished as a Hollywood actress’s veneered teeth. As Mink Stole declares while a gun is shoved up her ass in John Waters’ Desperate Living: “Go ahead! A single bullet can never destroy the beauty of fascism!” 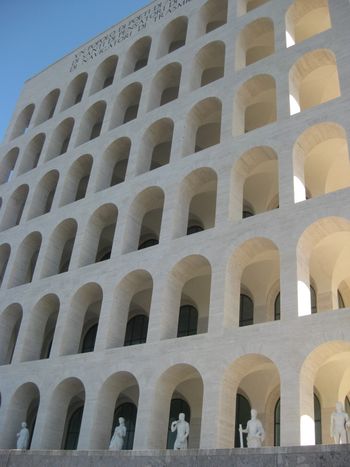 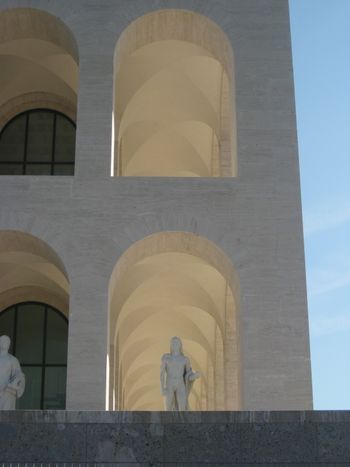 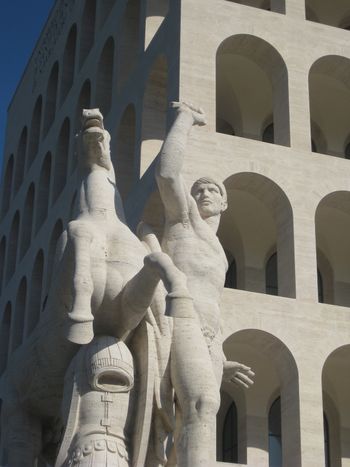 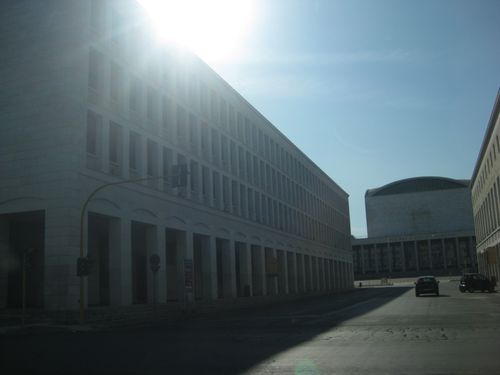 The streets of EUR have an eerie post-nuclear war ambience about them. (No wonder Antonioni chose the residential area of EUR for the final eight minutes of L’Eclisse, which function as a metaphor for Cold War anxiety and atomic apocalypse.) The low-domed building at the end of this street is the Palazzo dei Congressi, designed by EUR’s chief architect Marcello Piacentini to reflect the style of the Pantheon. Berlusconi has held some of his electoral victory parties in this building. 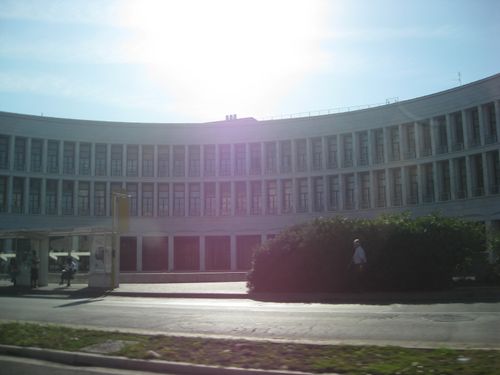 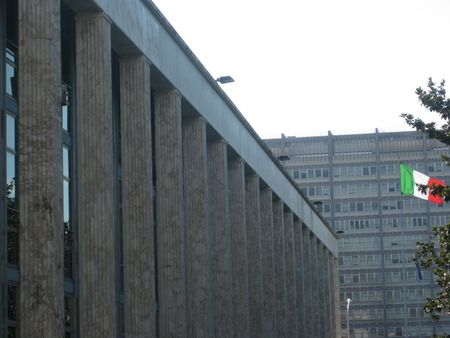 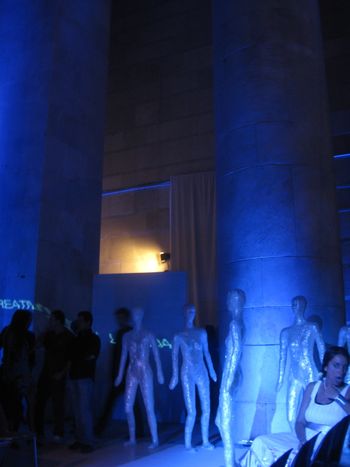 During the recent Alta Roma Alta Moda, Rome’s twice-yearly fashion week, a fashion show was held in one of EUR’s Fascist-era banks which has been converted into a swanky night club (above). 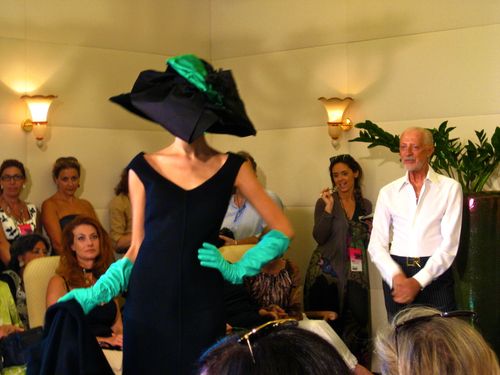 Couturier Lorenzo Riva (right) and model during Riva’s recent presentation in Rome. Photo: Glenn Belverio
Another remnant of Rome’s recent past are some of couture shows that are held in the Eternal City that seek to channel the ‘la dolce vita’ era, the ’50s and ’60s. I recently attended a show by Lorenzo Riva, who opened his first couture house at age eighteen, which harkened back to those days. The rest of the shows held during Alta Moda were staged by younger designers, both couture and pret-a-porter. But one label (which I later realized is defunct) I was on the lookout for was Tiziani of Rome.
Why? Karl Lagerfeld designed for them back in the ’60s and there are two noteworthy things about this freelance gig. One, the house was founded by an oil-rich Texan, not a Roman, and two, under Lagerfeld’s hand, Tiziani of Rome designed the costumes for one of the biggest, over-the-top camp classic films of all time: Joseph Losey’s Boom (1968) starring the booze-soaked megastar couple Elizabeth Taylor and Richard Burton. Noel Coward has a star turn as the “Witch of Capri” and among the many things to obsess over in this film are the lavish costumes. 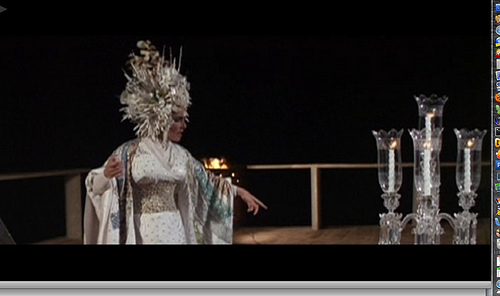 The most famous costume in the film is Taylor’s “kabuki” look, complete with daisy-adorned, porcupine-needled headdress. She chooses to don this not-very-casual look for a summer supper out on her terrace with the gossipy Witch of Capri and no other guests. Show off much, dollface? 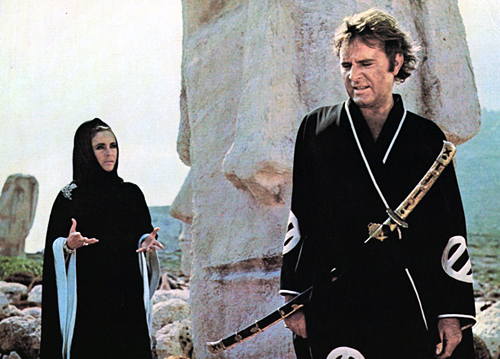 Burton wears a samurai costume for most of the film. By the way, the film takes place and was shot on the Italian island of Sardinia. So why the Easter Island heads? Why not? A set like this seemed perfectly logical in the hallucinogenic days of the late ’60s. 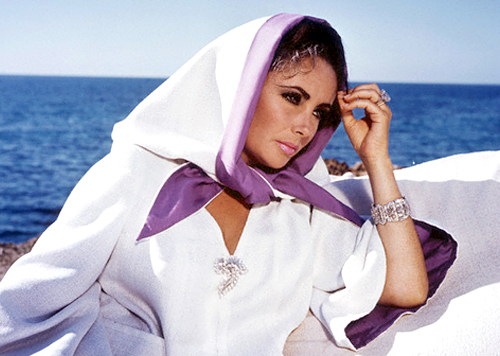 The film is faithfully based on Tennessee Williams’ play “The Milk Train Doesn’t Stop Here Anymore” and it is said that Boom was Williams’ favorite film adaptation of his work. 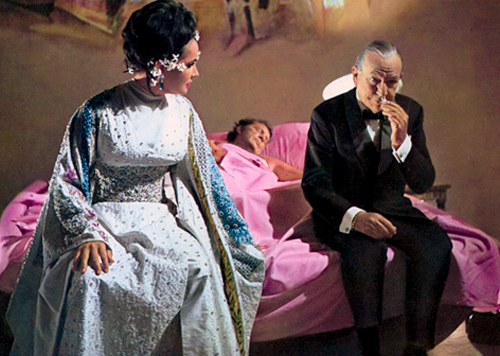 Yes, Noel Coward is probably snorting amyl nitrate in this scene. The dialogue here has a distinctly misogynist gay tone to it. If you want to know more, watch the film (if you can find a copy!) 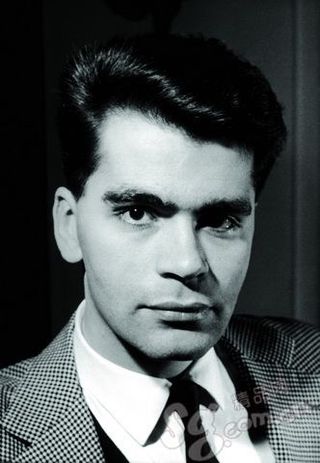 Karl Lagerfeld, back in the Boom days. 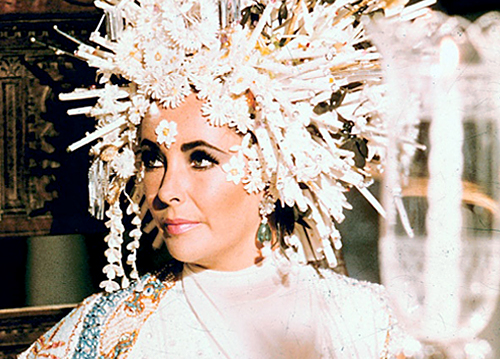 For further reading on Boom, check out this lengthy piece on Cinebeats: Confessions of a Cinephile. 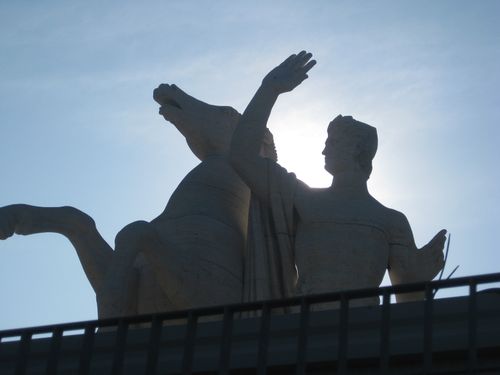