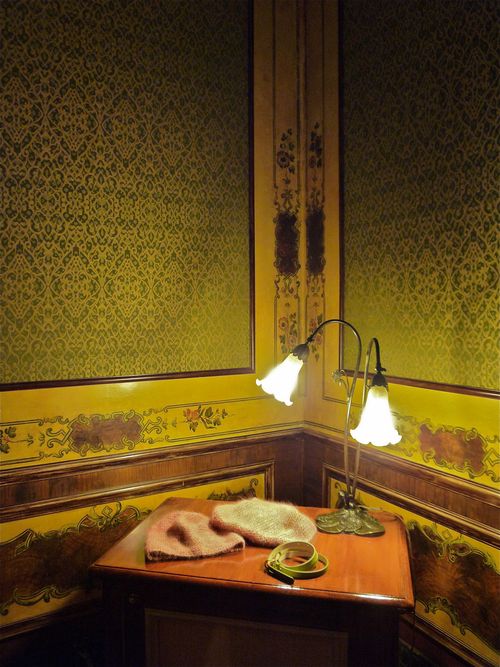 Last week while I was in Rome, I attended the opening cocktail for designer Laura Urbinati’s multimedia installation “My Room at Room”, held at the splendid Hotel Locarno, an Art Nouveau/Art Deco/Belle Epoque gem near the Piazza del Popolo. The installation was designed by the artist couple Ottonella Mocellin and Nicola Pellegrini and it showcased Urbinati’s Winter 2014 collection. The installation inhabited several of the hotel’s gorgeous rooms. I will definitely want to stay here during my next trip to Rome. 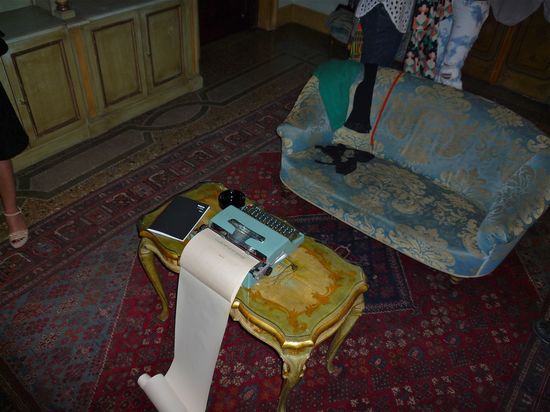 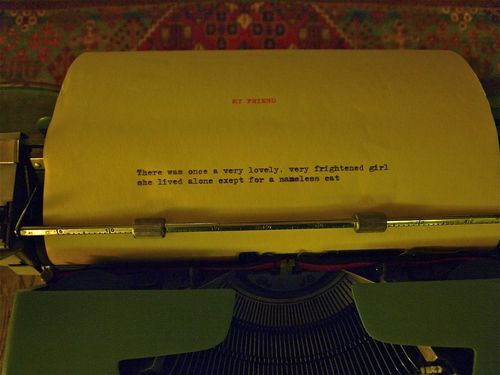 “There was once a very lovely, very frightened girl she lived alone except for a nameless cat” – from Paul Varjack’s story about Holly Golightly in the film version of “Breakfast at Tiffany’s.” 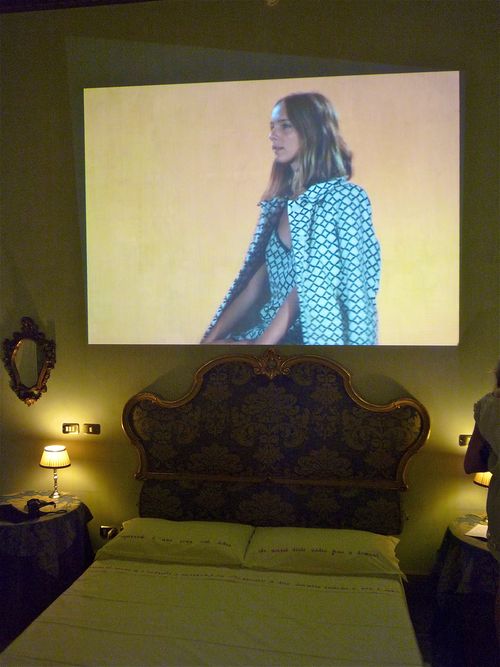 The “Breakfast at Tiffany’s” theme continued with “Moon River” playing on the soundtrack in this room. To show her clothes, Urbinati either scattered them around the rooms, as if tossed aside by a woman who was either very busy or very lazy, or showed them on models in video projections.

“This is a collection for an upbeat modern woman who is curious, lives a full life, is a traveller and who always wants to feel at ease by simply mixing a few items that lend themselves to infinite interpretations, depending on the occasion. ” – Laura Urbinati 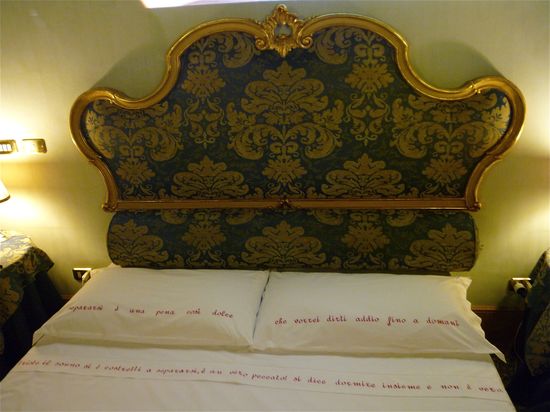 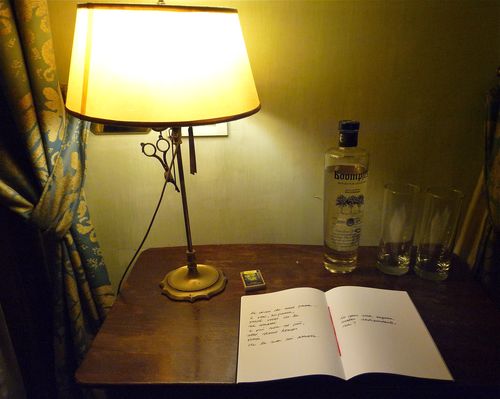 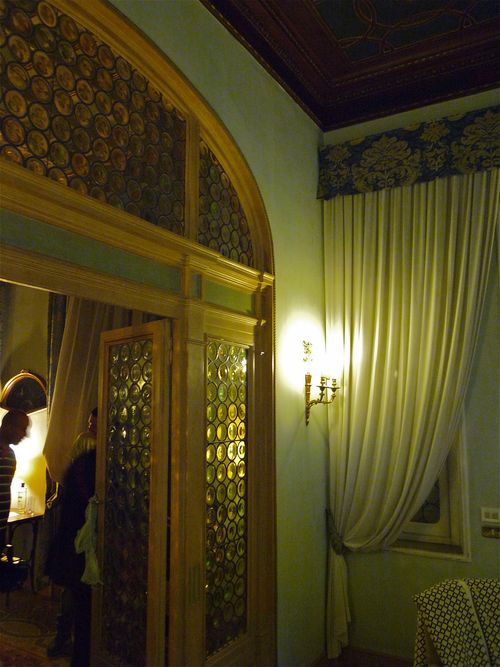 The Hotel Locarno is split into two buildings. These rooms are in the older wing, which dates back to the Belle Epoque, while the other wing was inaugurated in 1925 by a Swiss company. 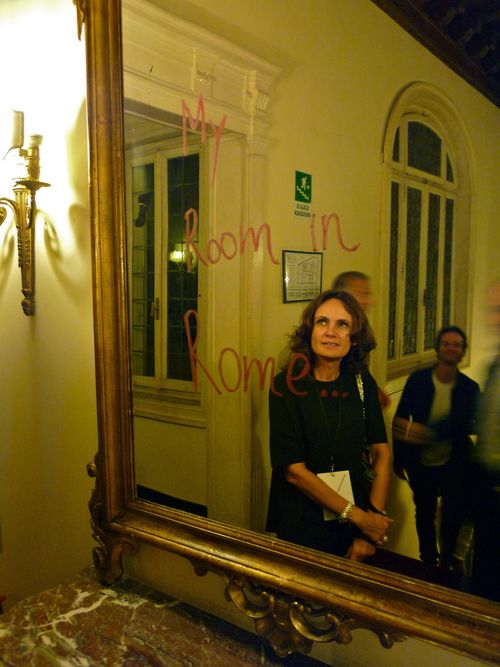 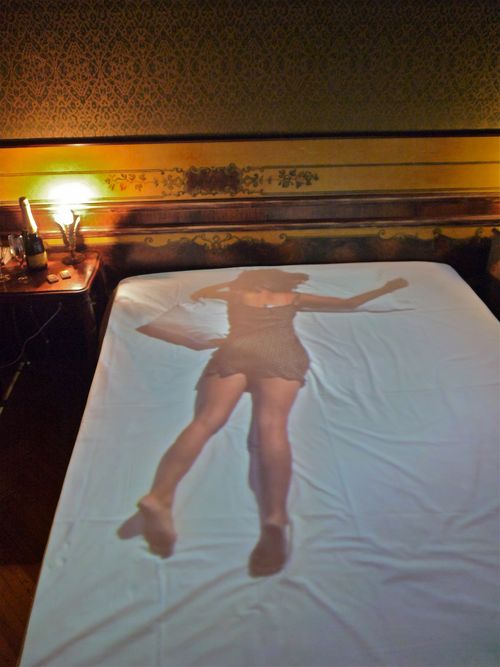 Laura Urbinati is originally from Rome, Milanese by adoption, and trained in the U.S. The Gambrinus bathing establishment is one of the family businesses, with famous clients like Audrey Hepburn and Patty Pravo–so Laura grew up breathing in the natural elegance of the leading members of the jet set.

In 1989, Laura opened her first boutique in Sunset Plaza in Los Angeles, “between the glamour of Hollywood and the surfing philosophy of life.”

“It gives me great satisfaction that the women who choose my clothes are people who think, who reflect the values that I believe in. For me, fashion is an interlude of beauty and unconcern that can lighten your mood, without excluding ethical values.” – Laura Urbinati 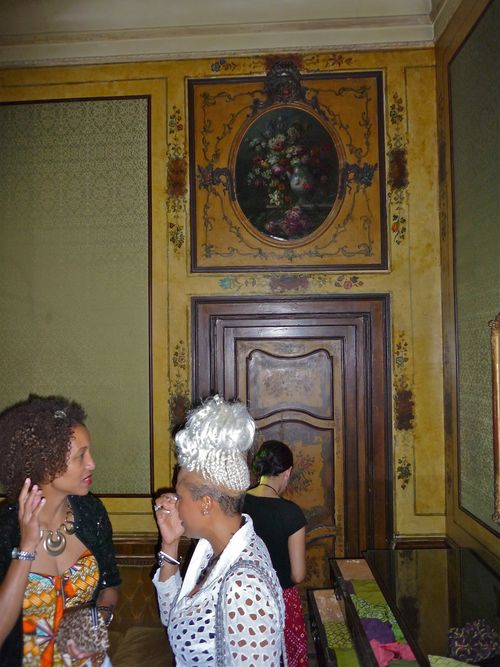 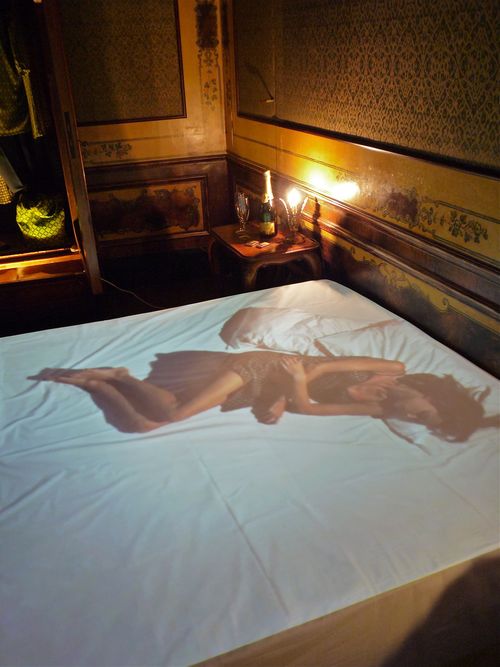 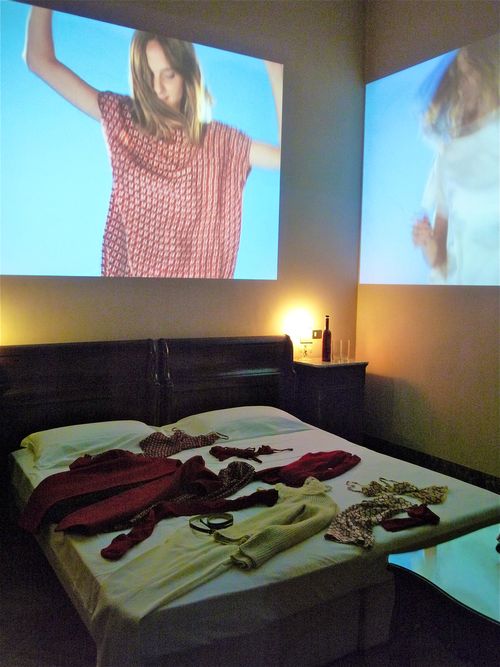 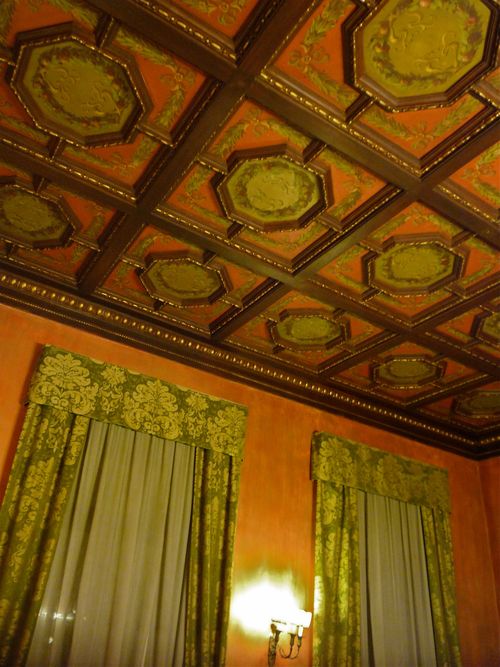 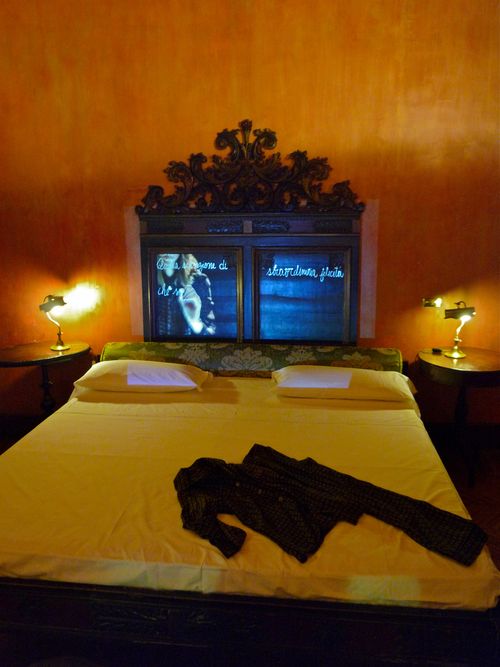 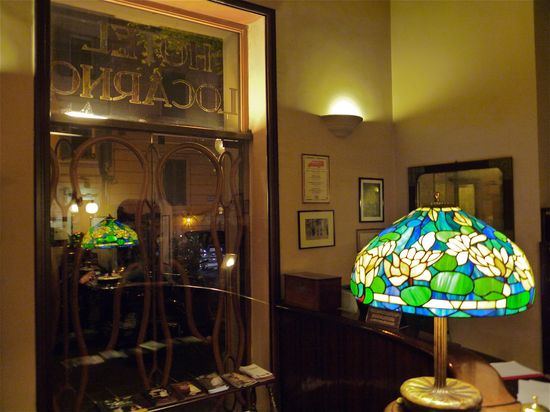 The hotel’s check-in foyer with lampshade by Louis Comfort Tiffany. 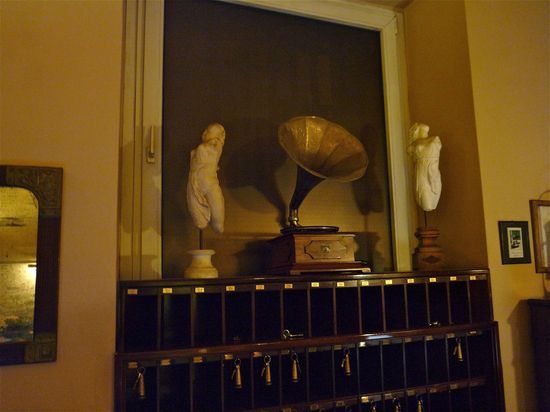 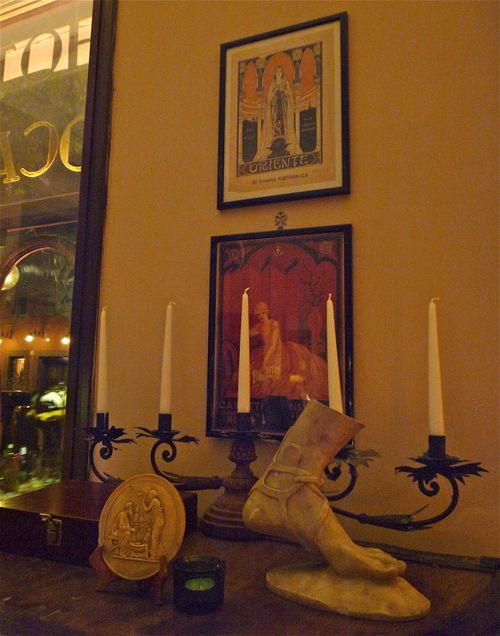 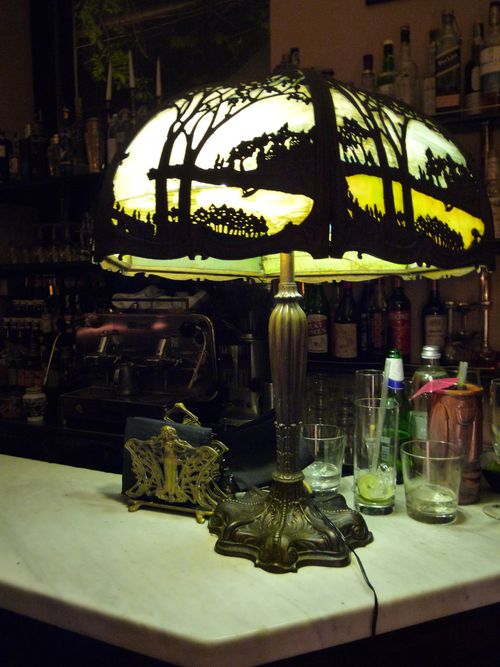 The hotel’s bar is very popular with international sophisticates and elegant Romans alike. Such a well-behaved crowd I observed. Nothing like the ostentatious, pushy riff-raff one must deal with at popular hotel bars in New York. Perhaps it’s time for me to move to Rome. 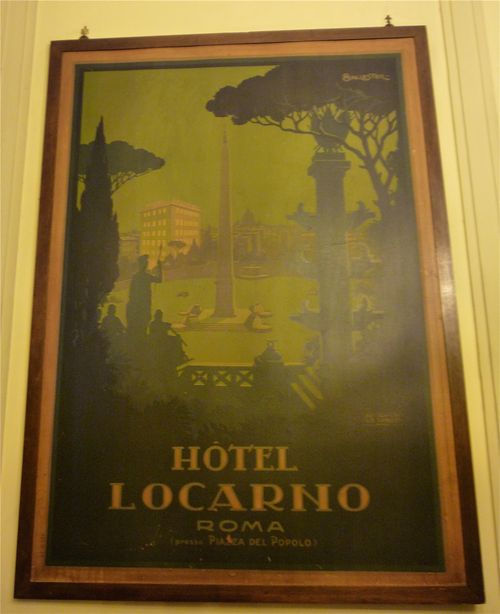