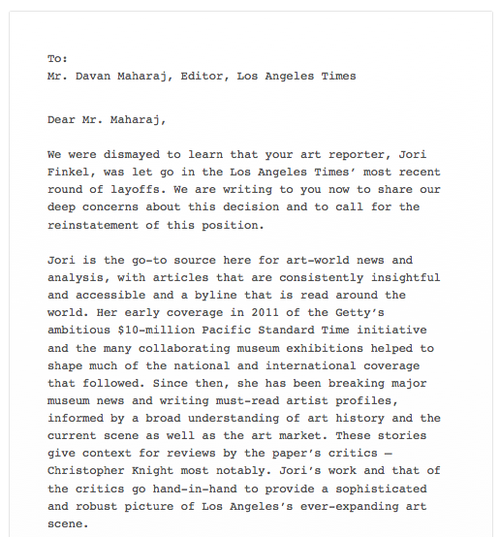 A portion of the letter to LA Times Editor Davan Maharaj calling for Jori Finkel's reinstatement.

In a most bizarre move, the Los Angeles Times has laid off its only staff arts reporter Jori Finkel. A petition has been created by Ann Philbin, Director of The Hammer Museum, and signed by MOCA's Jeffrey Deitch, LACMA's Michael Govan, as well as many other museum directors from LA to Orange County, San Diego, and Palm Springs.

"It is especially unfortunate to see you dismiss your only staff reporter
specializing in art now that Los Angeles is increasingly recognized
worldwide as the most influential center for contemporary art and
culture. For instance, just as she was being laid off, the New York
Times dedicated nearly three full pages to L.A.