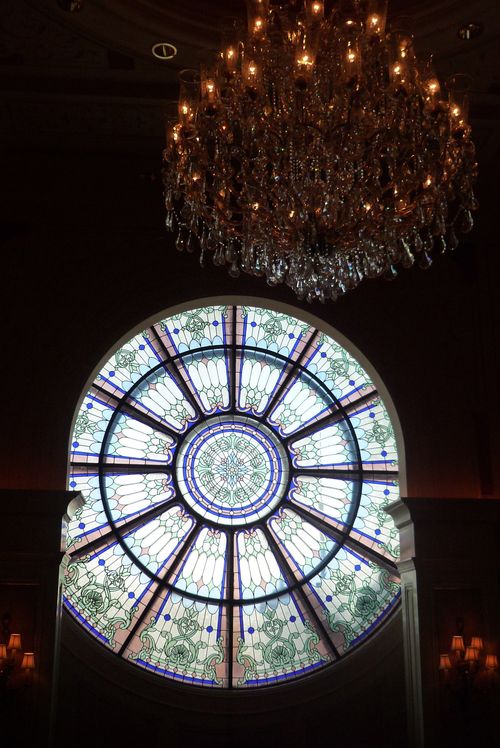 Above: The show-stopping stained glass in the Four Seasons’ Piano Lounge

Last month I flew to Cairo for some bucket-list sightseeing and to cover Cairo’s Fashion Nights which was held at The First Mall. The Mall is connected to the ultra-luxe Four Seasons at the First Residence in Giza where I was invited to stay for 3 lavish nights. Never before have I experienced such warm, attentive service. If you like to be spoiled–and who doesn’t?–you’ll definitely want to check into the Four Seasons in Giza. As soon as I arrived, I made a beeline for the expansive pool to soak up some Egyptian sun. The weather was picture-perfect. (It was grey, cold and damp when I left New York, so this was much-needed.) 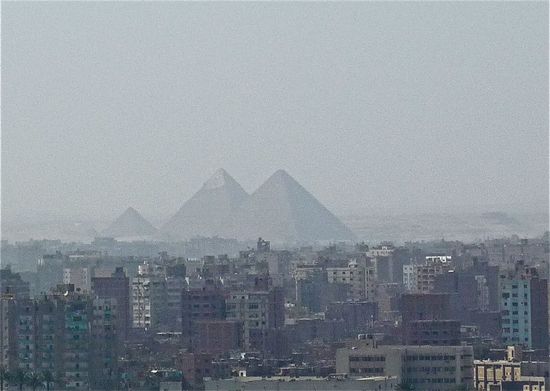 Yes, dolls, I had a view of the Great Pyramids of Giza from the terrace of my room! Magical. The haziness made them seem as if they were merely a mirage. Reality meshed with illusion. “Truth and illusion, George, you don’t know the difference!” 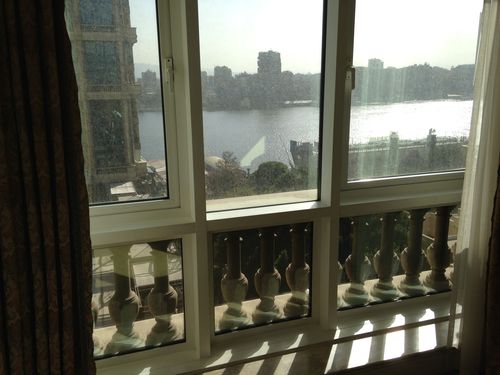 Before I moved to the Pyramid-view room, I spent one night in room that had sun-drenched Nile views. 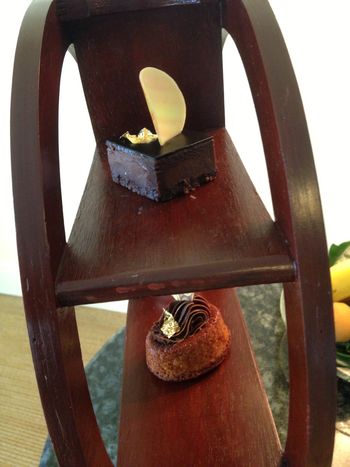 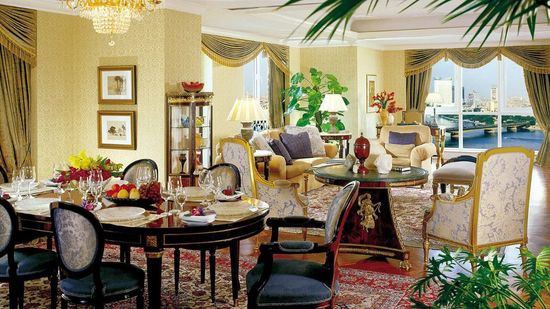 I stayed in a King-size room, but if you really feel like splurging, here is what the Royal Suite looks like. 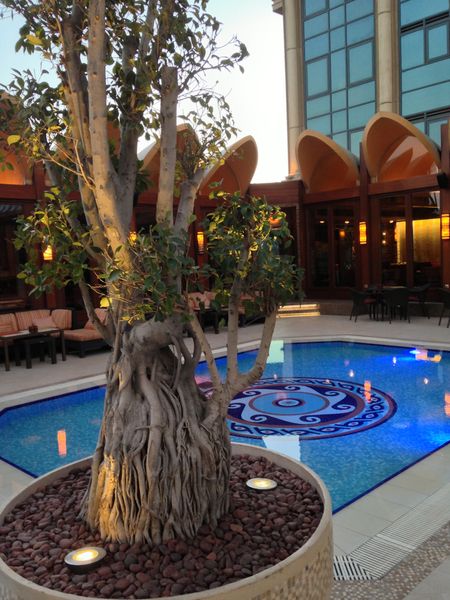 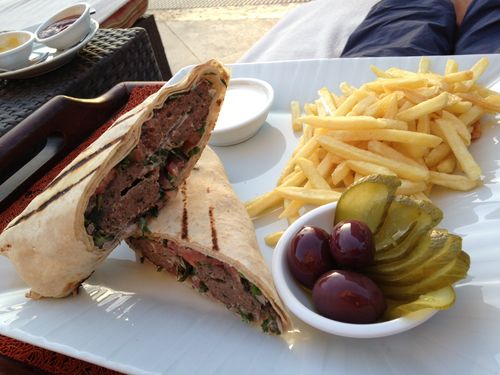 The cafe by the pool, Aura, is lorded over by Chef Nidal who hails from Syria, the food is Syrian-Lebanese (Shami) and there’s a poolside grill for shish kebab etc. On my first day I had lamb shawarma (above) flavored with mint, tahini and tomatoes and it was out of this world. 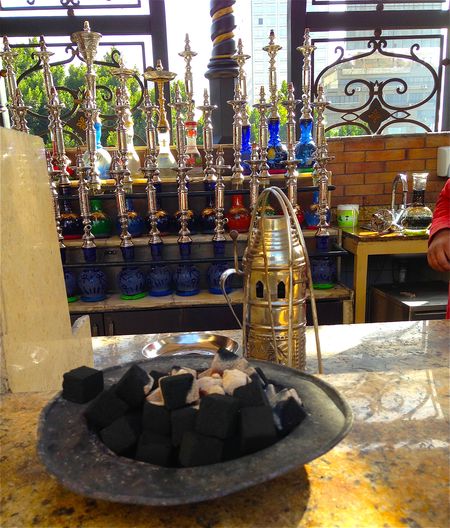 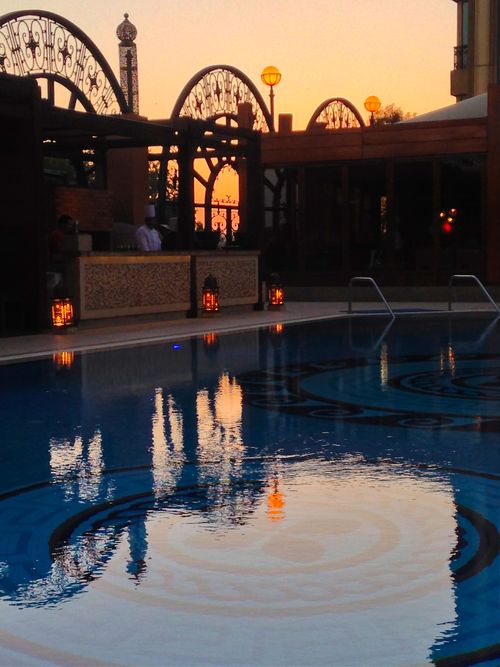 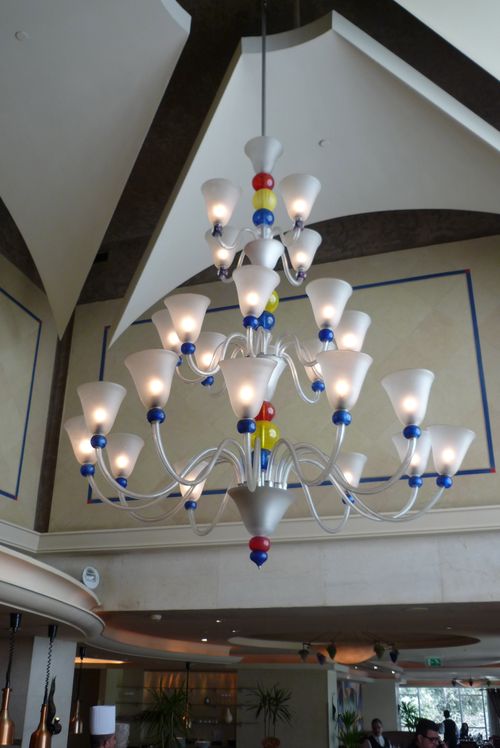 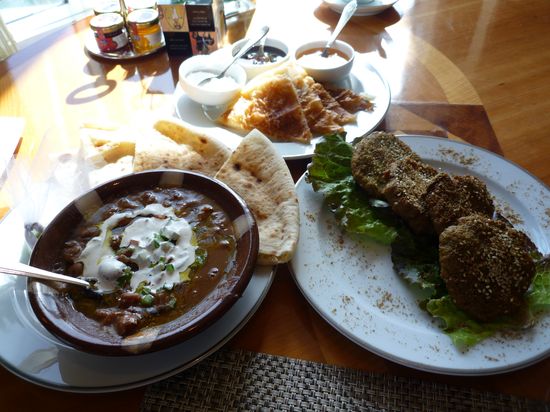 On my first morning at the hotel, I had breakfast with Hibba Bilal, the director of PR. She had the chef whip me up an absolutely heavenly Egyptian breakfast: falafel (which I think was made with green peas instead of chickpeas? SO delicious), ful (fava) beans and those feathery slices of divinely buttery bread, forget what it’s called, but you drizzle it with honey, inhale, and repeat. 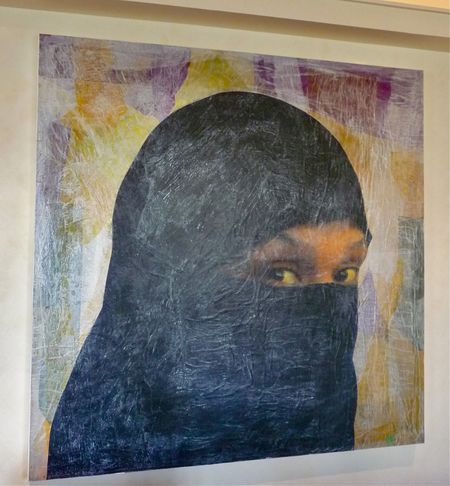 After breakfast, Hibba took me on a tour of the Four Seasons’ current art show, which is up until the end of March. There is a heavy emphasis on art at the Fours Seasons at the First Residence and it was a delight to be surrounded by so many wonderful paintings. There are shows up on a regular basis and all pieces are for sale. If you are interested in any of these works, do not not hesitate to contact the hotel. I will now walk you through some of the artists who are currently showing. (This painting, and the next three, are by Atef Ahmed.) 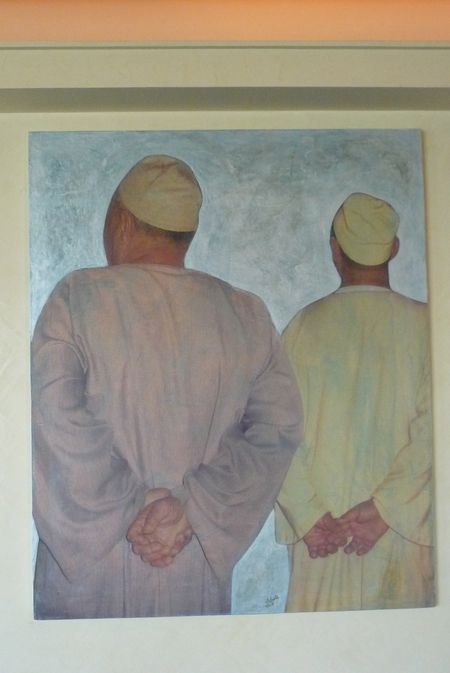 Atef Ahmed, born in 1969, is a member of the Plastic Artists Syndicate, the Egyptian Society of Folk Arts and Cairo Atelier. He likes to paint the average Egyptian person, in his or her local surroundings. Since 1990 he has held several solo and general exhibitions in the Arab world and China. 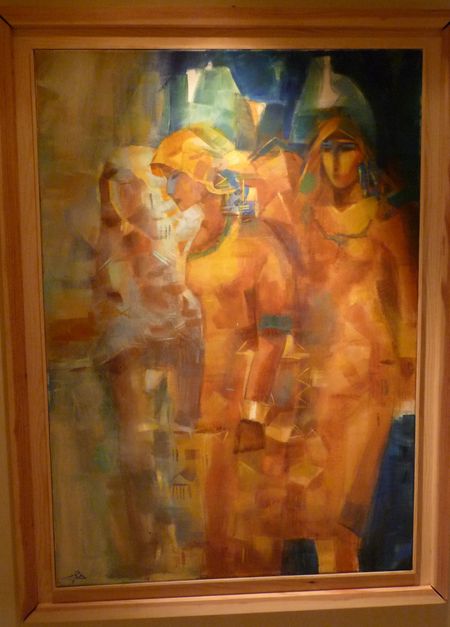 Mohamed El Tarawy, born 1956, is currently the press illustrator at Rose al-Youssef and Sabah al-Khier magazines in Cairo. Among his many accolades, he has received the State Honorary Award of the Arts. I was mesmerized by his ethereal watercolors of Egyptian women. 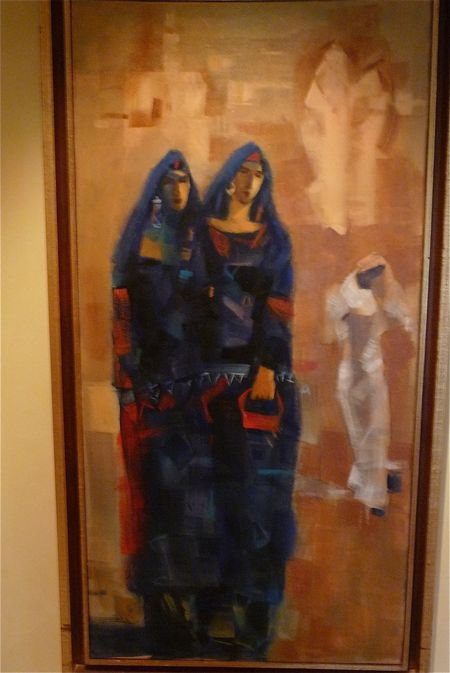 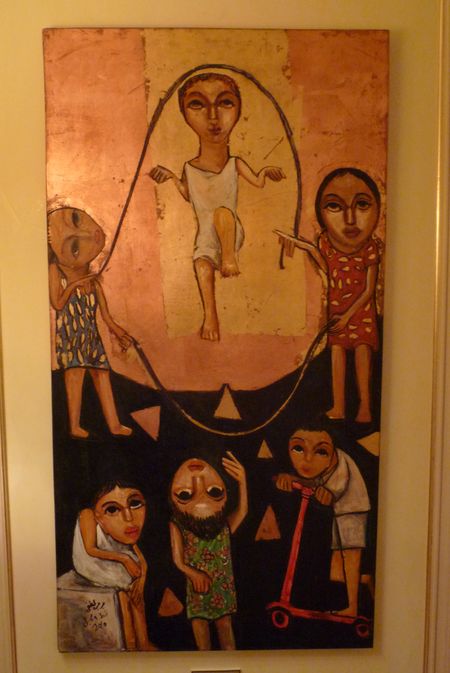 Dr. Guirguis Lotfi was born in Alexandria in 1955. A Coptic Christian, his work is a re-interpretation of Coptic art from the 5th and 6th centuries–and he uses many of the same methods and materials that the original Copts used. 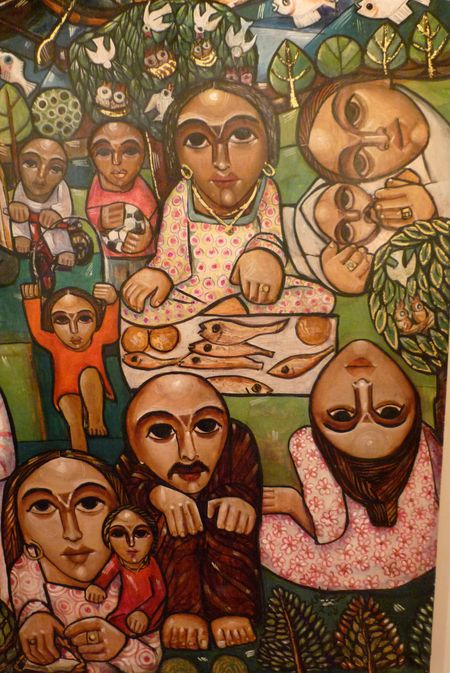 Detail from a work by Dr. Guirguis Lotfi 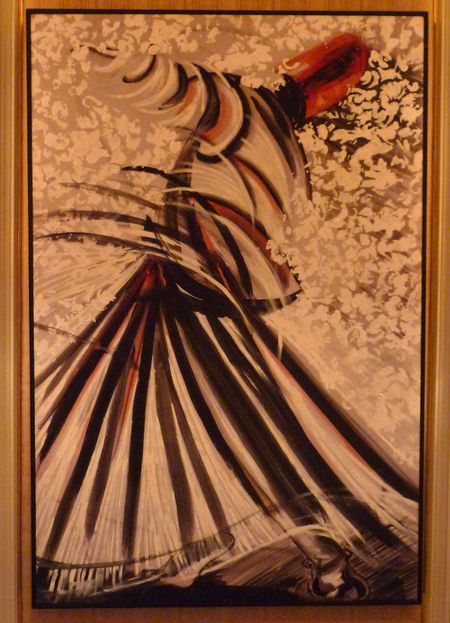 Rana Chalabi is an established Syrian/Lebanese artist who has lived in Cairo for over 30 years. Her energetic paintings depict Sufi dervishes. “Movement is life, and I want the viewer to feel that movement,” she says. 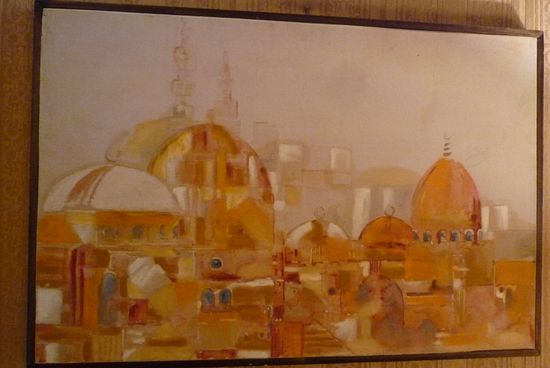 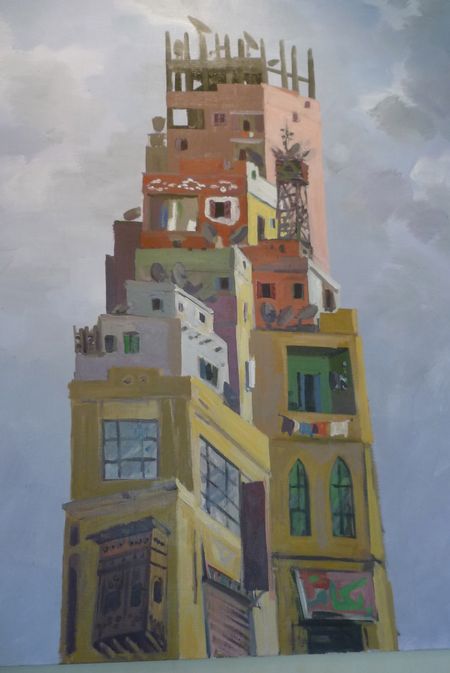 Mohamed Abla was born in Mansoura, in northern Egypt, in 1953. In 2007, he founded The Fayoum Art Center where artists meet, work and collaborate. In 2009, he established the first caricature museum in the Middle East. He works between Cairo, Fayoum and Germany. I’m told he was quite active in the 2011 Revolution and you can sometimes find him camped out now in Tahrir Square. I really loved his paintings of buildings in Cairo. 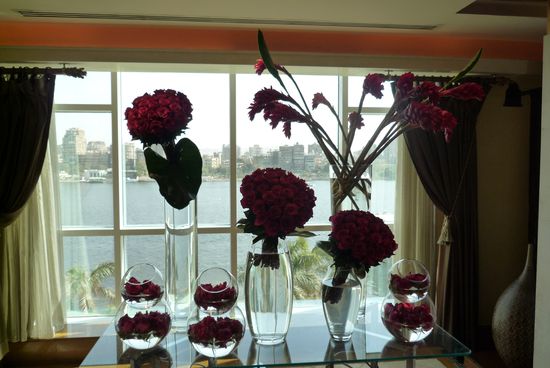 Some of the Four Seasons renowned flower arrangements, against a backdrop of the Nile. 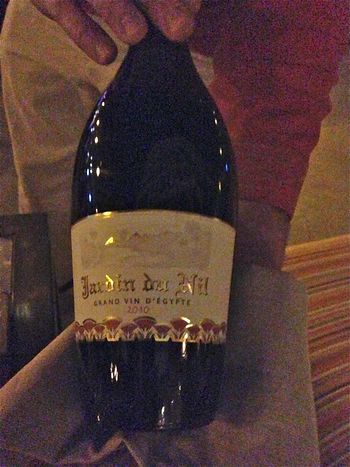 The red wine of the Pharaohs! I really enjoyed discovering this Egyptian wine, Jardin du Nil. It won a Silver Medal from the Challenge Millesime in France in 2011. It was the perfect wine for a chilly night by the pool with Ahmed and Daki who were showing their jewelry collection at Cairo’s Fashion Nights the night before…. 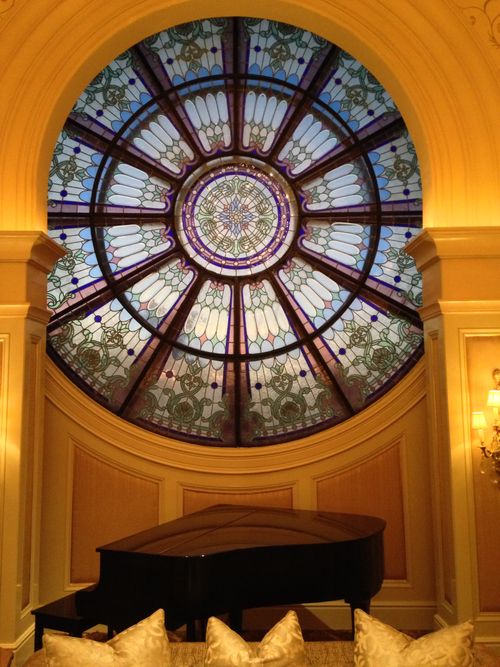 I had a fantastic stay at the Four Seasons at the First Residence and because of its close proximity to the Pyramids of Giza, it’s a must-stay for that big bucket-list visit to Egypt.