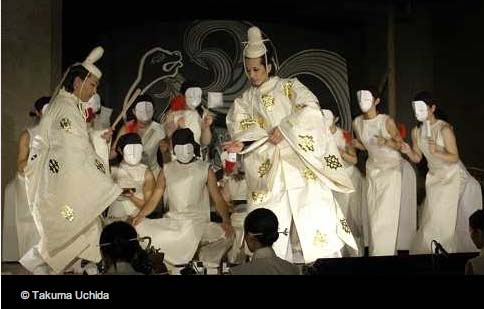 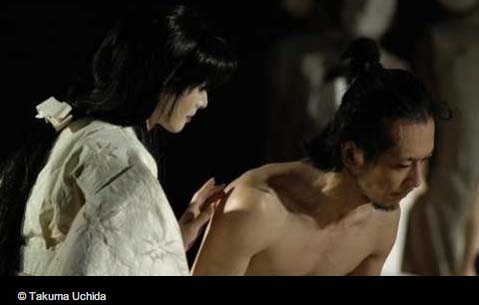 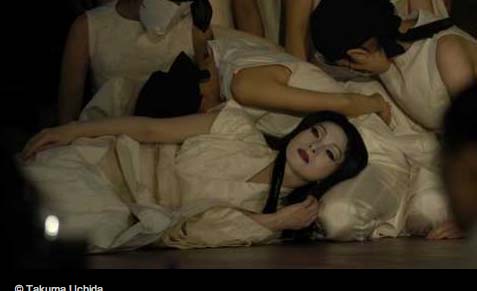 All photos by Takuma Uchida

Beirut this morning and Musee du Quai Branly tonight. I attended the truly magical performance of Maha Bharata by Shizuoka Performing Arts Center – Japan and all I can say is if you are in Paris, book your tickets now. The Theatre Claude Levi-Strauss filled its stage with 26 artists directed by Satoshi Miyagi, whose Kabuki-inspired direction is based on the dissociation of the Logos and Pathos; the word and the body.

I'm familiar with the Maha Bharata directed by Peter Brooke which I saw more than a decade ago at the Bouffe du Nord but imagaine the Hindu mythology interpreted by a Japanese contemporary theatre company, breathtaking. In Satoshi Miyagi's version he imagines Mahabharata, the story of King Nala in the Helan period in Japan with wonderful hanging scrolls and elephants in paper in fact all of the costumes were in paper. "Konjaku monogatan" (Tales of ancient feats) published during the same period containing a large number of stories which originated in "the Buddhist Tales" in India 2,000 years before. The influence of India and China on the Japanese culture is clear. Shichifukujin (Seven Gods of Happiness) comes from India.

Thursday 7th and Friday 8 and Saturday 9- performance at 20h

The performance lasts 1h45 minutes without an intermission.

In addition to the performance:

Two Origami atelier seances are proposed and animated by the artists performing in the spectacle.