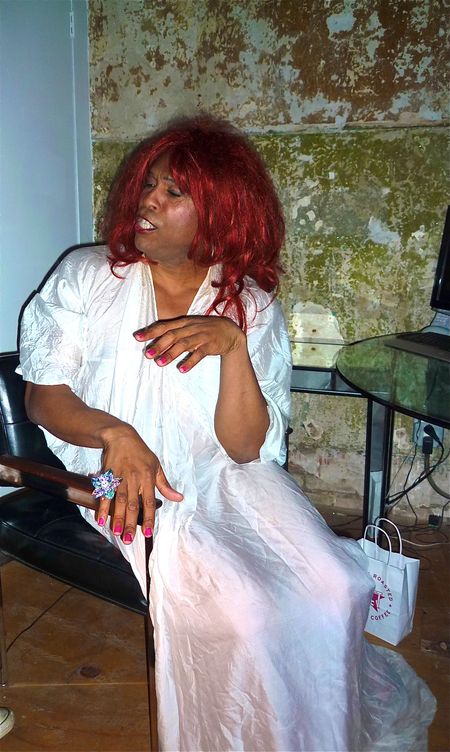 Vaginal held court during the opening in the back of the gallery. I love her ring and the decrepit patina on the gallery walls.

My sister of the cloth, Vaginal Davis, has been in New York for a week or so for the installation and opening of her one-woman show at Participant Gallery at 253 East Houston Street. The opening was this past Friday, delayed from last Sunday due to all the Hurricane Sandy Dennis drama. It was certainly worth the wait.

The show’s title–Hag: small, contemporary, haggard–is a reference to Ms Davis’ HAG Gallery in Los Angeles which she founded in the early ’80s so she could “find a hot boyfriend. That’s really the only reason I started the gallery,” she told me over breakfast the other day. “But of course everyone attending the openings were finding boyfriends…everyone except me!”

The opening on Friday night certainly drew a lot of wild and woolly NYers out the woodwork, and it definitely felt like an Old Home Week of sexy misfits and legends. 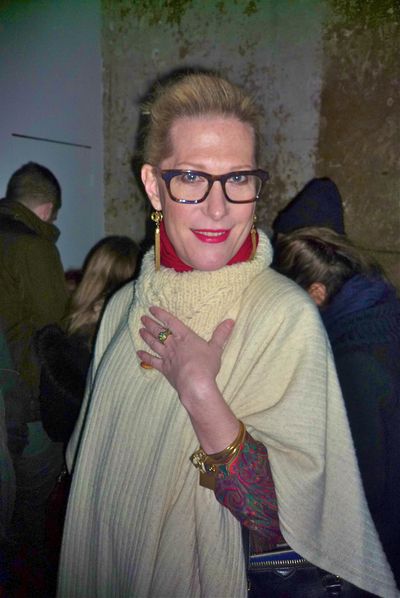 It just isn’t a party without Justin Vivian Bond. 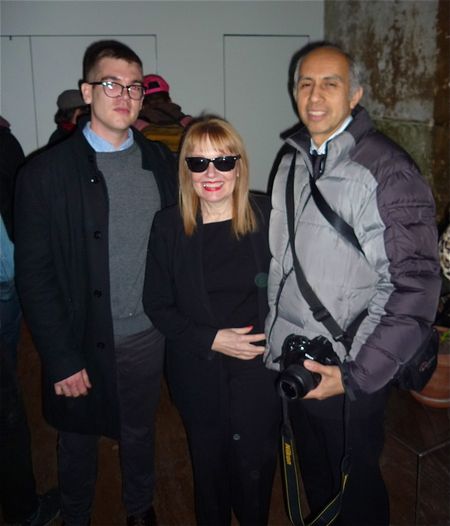 Andrew Blackley and the sensational Bibbe Hansen and Sean Carrillo. Viva Bibbe! It was great catching up with her and hearing all about her performance adventures in Barcelona. I also had a lovely chat with Sean and Andrew. 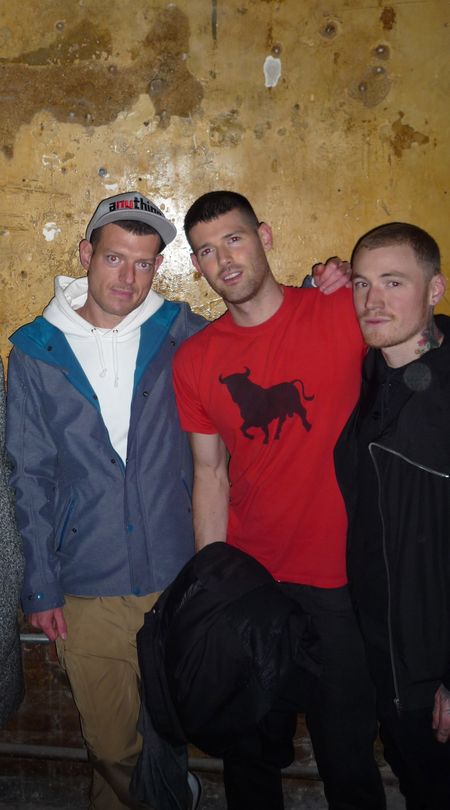 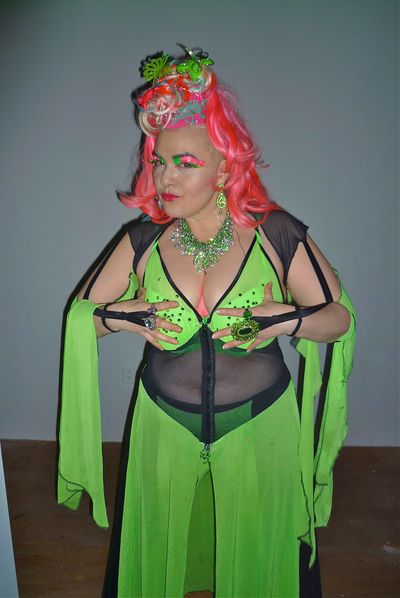 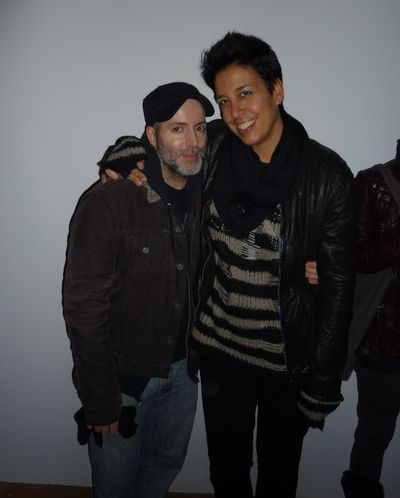 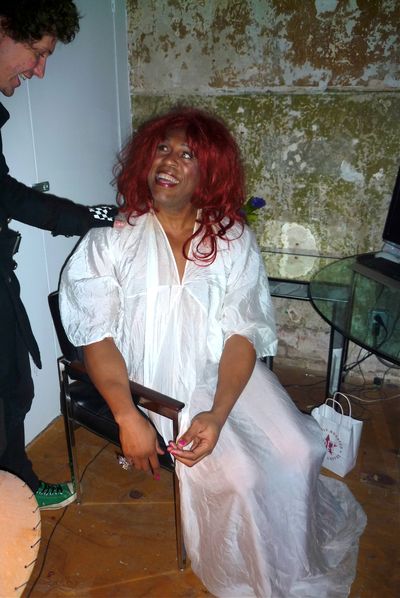 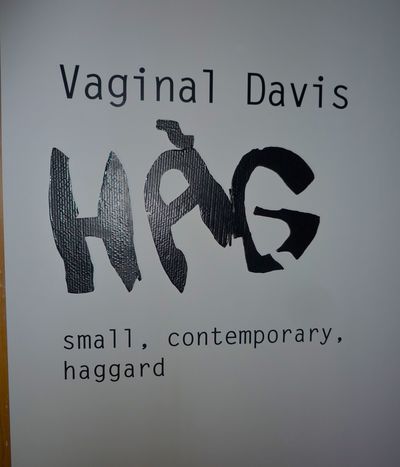 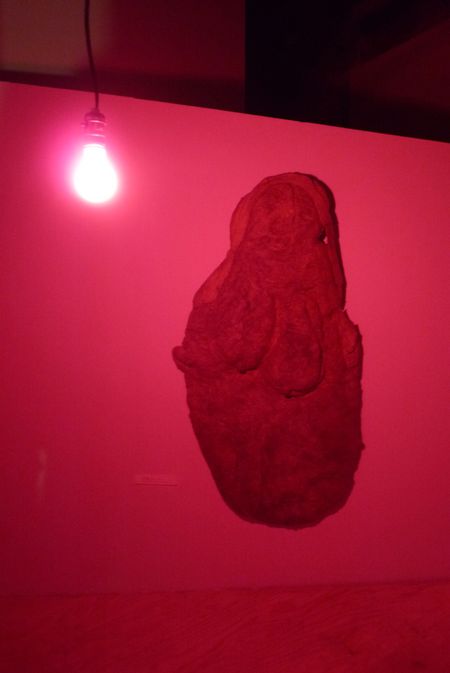 Vaginal created bread sculptures for the show that had a decidely “fertility cult” vibe to them, especially this Venus of Willendorf doppelganger. 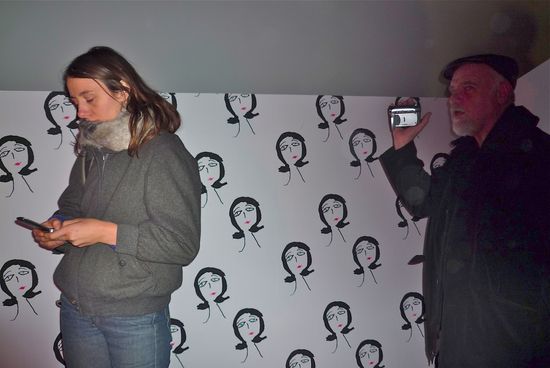 The wallpaper Vaginal made is inspired by the German tradition of wallpaper. (Vag has been living in Berlin for about 6 years now.) 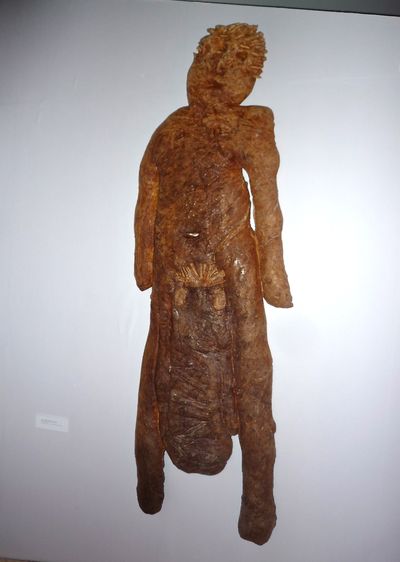 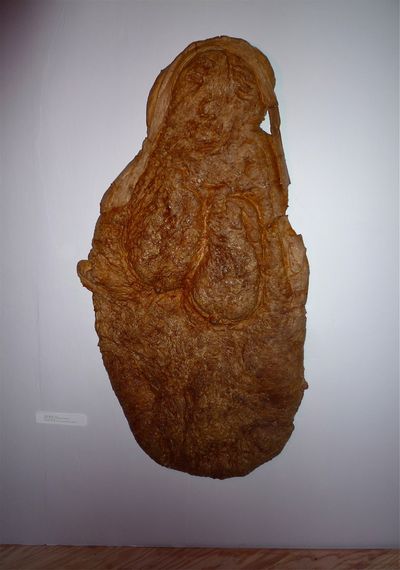 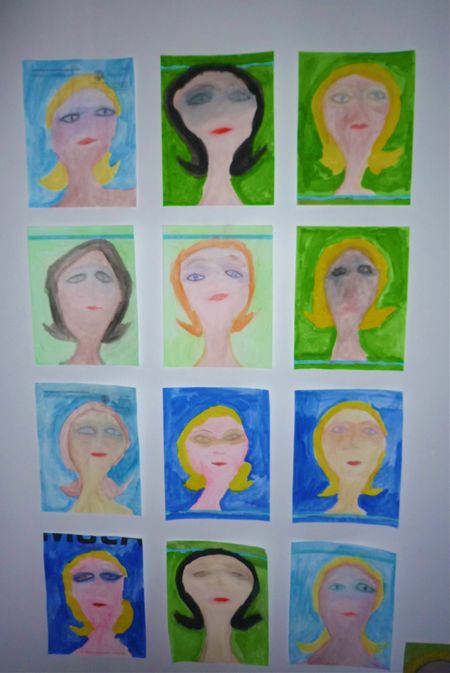 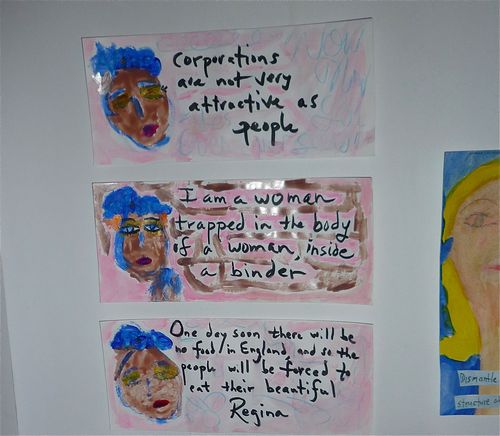 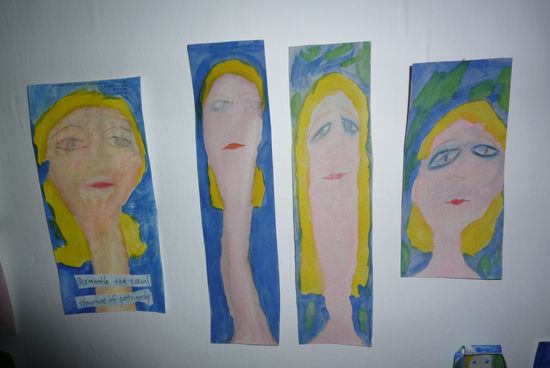 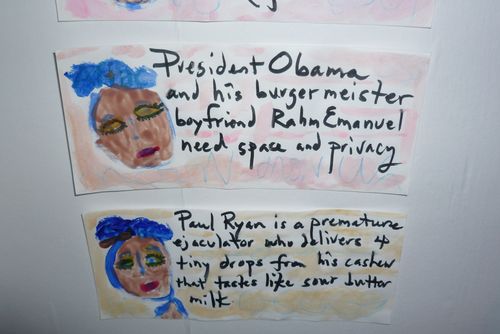 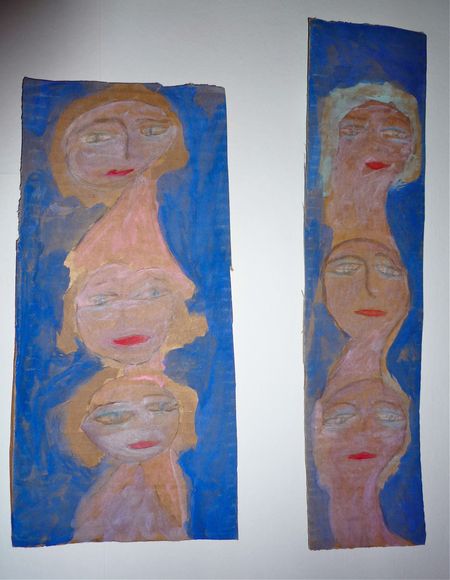 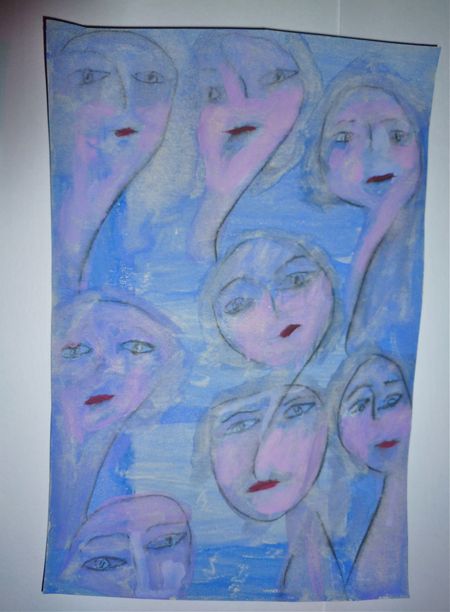 The ghostly blue drawings were my favorite. 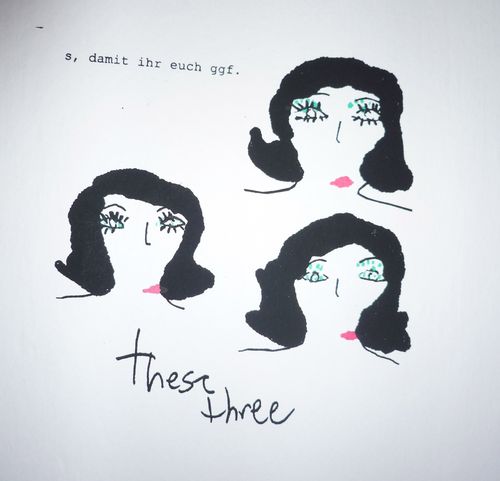 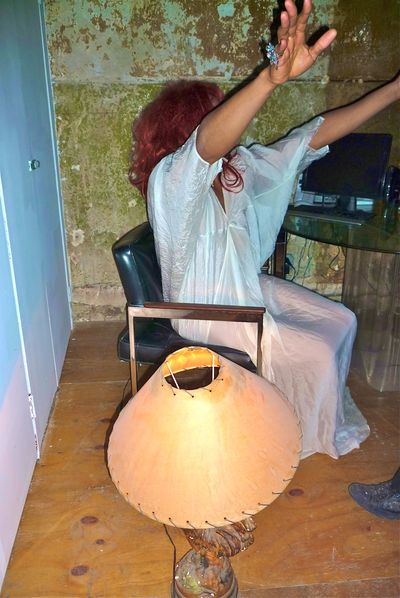 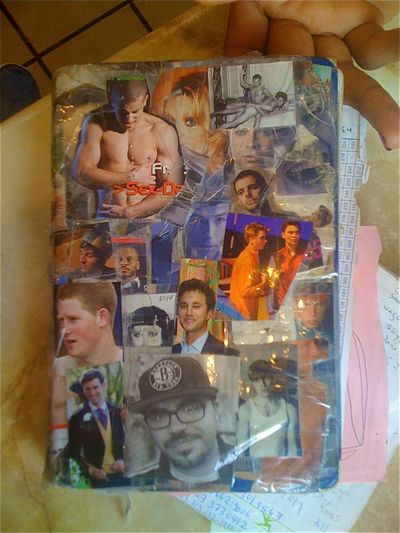 The next morning I had breakfast with Vag and she showed me her visual diary. None of that Pinterest crap for Ms. Davis! 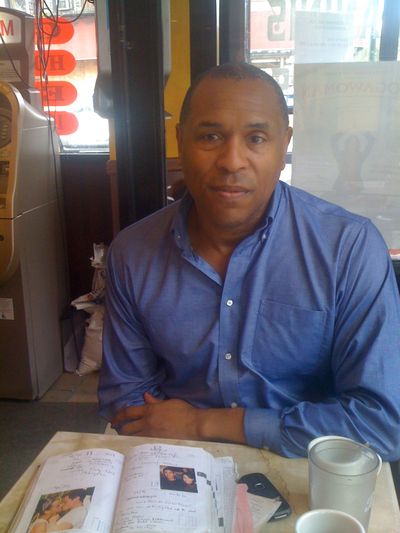 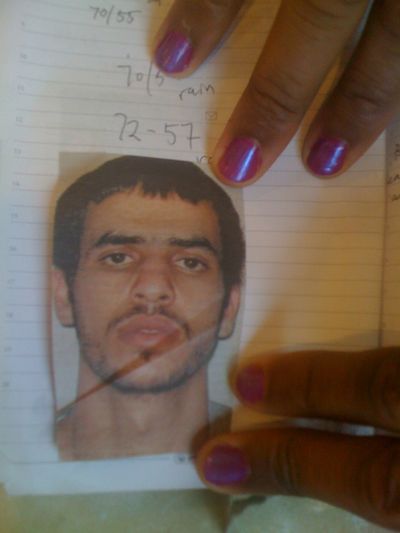 I leafed through Vag’s diary and we paused on this photo of a hot terrorist she clipped from a newspaper. “He can blow me up anytime,” I cooed. 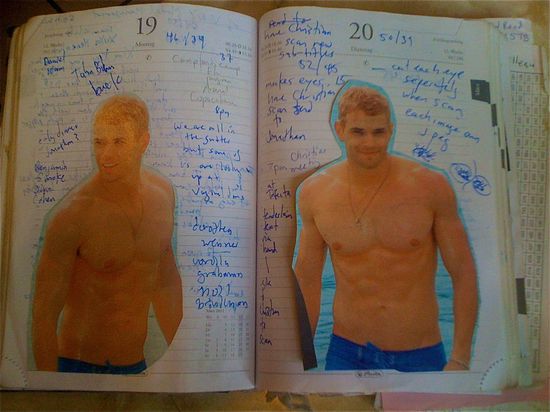 Her diary is bulging with inspiration and vital statistics.

Previously: My visit with Vaginal Davis at her studio in Berlin