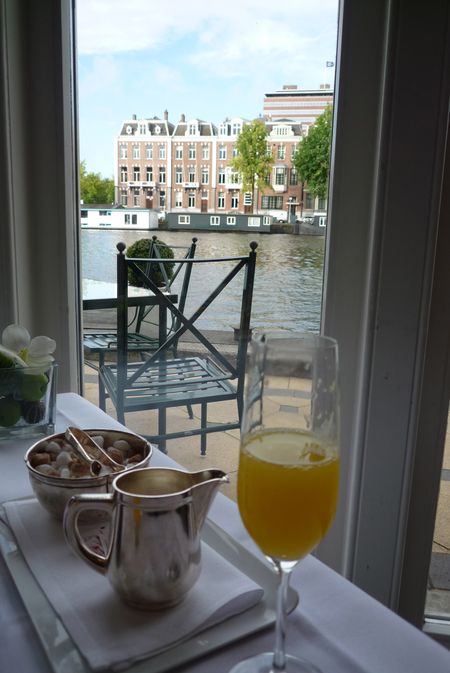 Mimosas by the Amstel River. The hotel serves complimentary Moet at the breakfast buffet.

Because I wanted the gamut of great hotel experiences in Amsterdam (Lloyd Hotel: historic and super-quirky; Conservatorium: hip luxury and top-notch spa), I also wanted a night of grand old European tradition. Luxury that wasn’t trying to be cutting-edge. I wanted to feel like the Marchesa Casati during the Belle Epoque who, on a lark, decided to visit one of her Dutch grand dame aristocratic friends for genever gimlets and wicked gossip out on the terrace that overlooks the Amstel River. For this I chose the radiant riverfront palace known as the Amstel InterContinental. (Well, chose, and they also invited me.)

While I do have one South American aristocratic friend in Amsterdam, I’m not quite sure if I have any Dutch aristocratic friends–although, on my last day in the city, a mysterious Surinamese woman in a divine gold turban dropped by the hotel for a visit and some green tea out on the terrace.

The Amstel was the very first example of a Grand Hotel in Amsterdam as we know them today. Before it opened in 1867, Amsterdam did not have any guest accommodation of international standing. (Glad I wasn’t visiting Holland in the early 1800s!) Then and now, the hotel has hosted numerous members of various European Royal families.

“A palace on the Amstel – that is what Doctor Samuel Sarphati had in mind when he was thinking about a hotel with international allure. While other European cities had already helped launch the trend of the Grand Hotel, Amsterdam was only able to offer simple lodging houses…..read more about the hotel’s history here. The hotel’s lobby. Not too shabby, yeah? Because I forgot to pack my Jean Louis Queen Bee gown, I wasn’t quite prepared for my grand descent down the staircase…. Hello, gorgeous! This dapper gentleman escorts you during your elevator ride. I adore posh elevators. It’s a good thing I like toile! It really doesn’t get any more traditional than this…and the room was so comfortable, spacious and relaxing. There was a lovely green view from the long windows and the bed had a sumptuous feather-bed topper. I slept like the Duke of Earl. Some more of that Delftware that I love. The hallway entrance of my room. There was no mini bar, but you can see the room’s maxi bar in the background, with full-size bottles. So much more visually appealing than a boring little plastic refrigerator stocked with wimpy Cracker-Jack-prize bottles. Real gentlemen and ladies drink from full-size bottles. But luckily, the hotel manager sent up a lovely complimentary bottle of French red wine to my room–so I didn’t have to crack open a pricey bottle of bourbon. And isn’t that the cover of New Order’s “Power, Corruption and Lies” hanging on the wall? So Dutch: A pile of lumber in a vice and an arty cow plopped down in an otherwise classically appointed lobby. The painter Scott Neary–who divides his time between New York, France and Holland–met me at my hotel in the afternoon to take me on a tour. Scott lived in Amsterdam in the ’80s and has been coming to Holland since the ’70s! So he really knows his local history and folklore. I simply must move into one of these narrow 17th-century houses, and the more it’s leaning over, the better. What a hoot it will be when the locals see me hoisting my 15-foot Mao statue up with the outside pulley and into my top-floor rumpus room. Scott took me to what is considered one of the most beautiful cinemas in the world, the Theater Tuschinski, built in 1921. Back at the hotel… Ilanga met me before I left for the airport (to fly to Beijing) for some tea out on the hotel’s lovely terrace. Her wrap is made from a beautiful 18th-century Dutch tapestry fabric. I didn’t get to try out the hotel’s spectacular pool but I took a little tour. Previously on “Glenn Belverio in Amsterdam”:

My stay at the quirky Lloyd Hotel

Inside Design fair & Art in Redlight at the Oude Kirke Cathedral

The Amsterdam premiere of DIANA VREELAND: THE EYE HAS TO TRAVEL