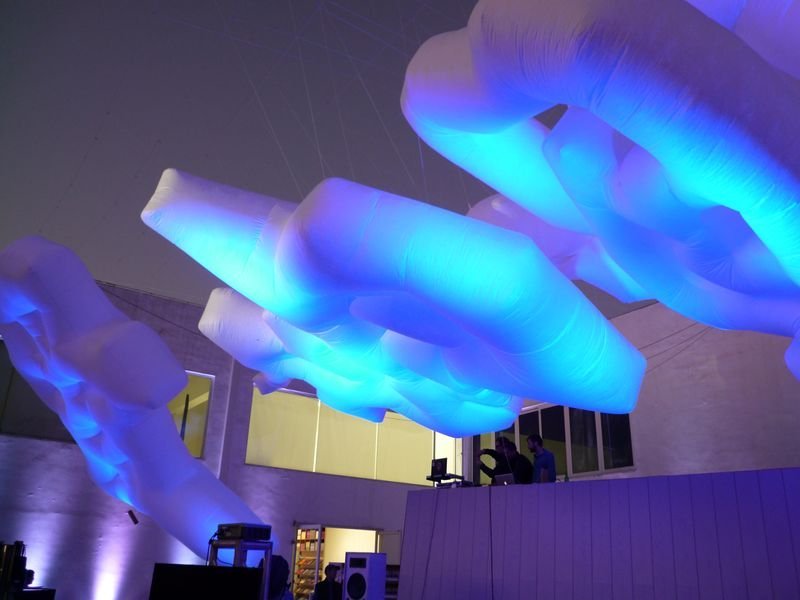 Above: Balloon sculptures by the very famous Chinese artist. They spell out “Beijing Spirit” in Chinese characters

Last month during our 5-day tour of Beijing Design Week, we visited Caochangdi Village a few times. Caochangdi is the newer art district, comparatively speaking, and it’s much hipper than the over-commercialized 798 Art District which has not only jumped the shark, but has stir-fried it and served it re-heated over and over again to undiscerning tourists. (However, as a cheerleader for East Germany nostalgia, I do recommend a trip to 798 if only to admire all the marvelous factories designed by architects from the GDR in the 1950s.)

Caochangdi, on the other hand, is a delight. Caochangdi was founded by a Very Famous Chinese Artist, whom I have given the nickname of “Yoo No Hu.” Yoo was also very instrumental in the founding of the long-gone Beijing East Village art encampment (yes, named after my ‘hood in NYC. Yoo lived there in the ’80s), and 798.*

For Beijing Design Week, Caochangdi hosted CCD – The Community and the CCD Pavilion (where Yoo’s cloud sculpture is, pictured here). As Milan was the guest city at BJDW this year, the Pavilion was designed by Italian architects Stefano Avensani, Marcella Campa and Andrew Destro of Local Design Studio.

* Due to political and legal sensitivity, I have kindly agreed not to publish the artist’s name as a courtesy to the event organizers. 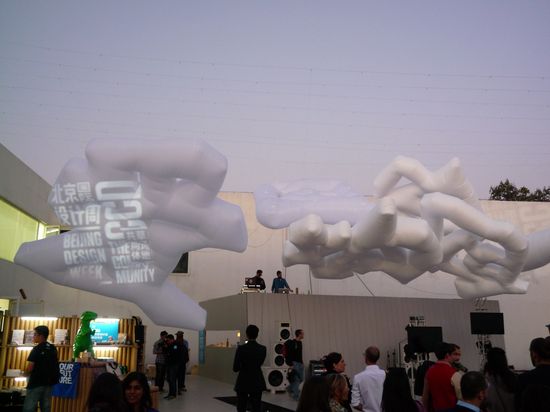 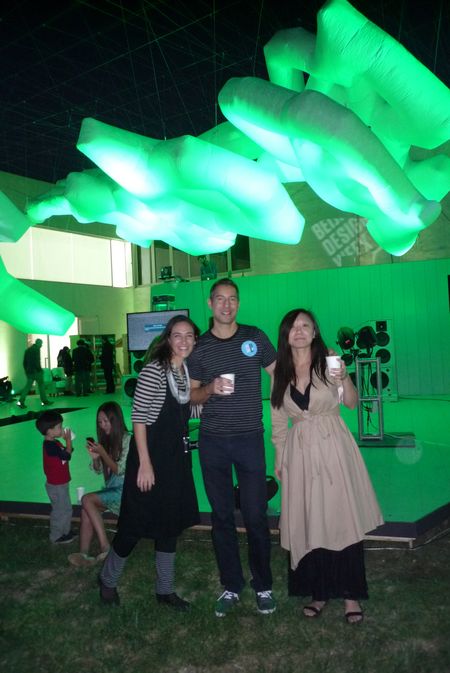 Me with two super women at the opening night cocktail. On the left is Italian architect Marcella Campa and on the right is Naihan Li, the initiator of CCD – The Community Project. I regard Naihan as the art star of BJDW (and beyond) because she seemed to be involved in so much and has created so many interesting things. In addition to being the initiator of this project, Naihan is also a furniture designer–her furniture-as-foldable-crates is geared toward upscale nomads who move a lot–and she studied design and architecture at The Bartlett in London.

The movable furniture is perhaps a bittersweet metaphor for the problem of non-upscale citizens being constantly displaced by the destruction of Beijing’s hutongs. (Caochangdi, incidentally, is also under threat from local government wrecking balls.) Above: One of Naihan Li’s crate furniture pieces

Naihan’s other designs that I saw during BJDW are the rather controversial skyscraper candles which are sold at Wuhao Curated Shop. You’ll see them in my upcoming report on our dinner at Wuhao. Naihan hails from Harbin (one of my favorite cities!) and moved to Beijing in the 1980s at a time when the city was experiencing an explosion of imported cultural concepts–a much-needed phenomenon in a city that was still licking its wounds in the aftermath of the 10-year Cultural Revolution. 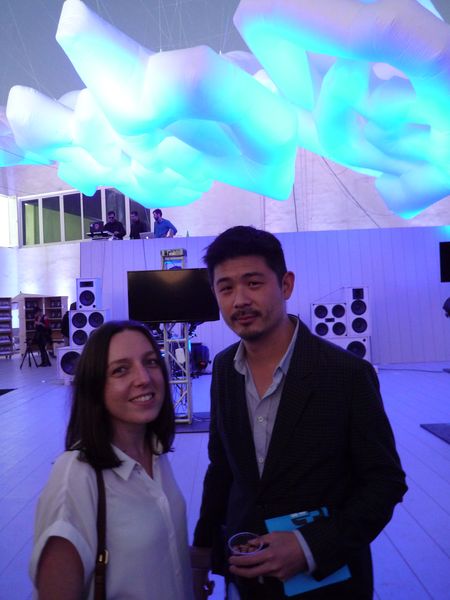 This is probably Aric’s last stint as CD at BJDW as he’s moving on to a big job as design & architecture curator of the M+ visual cultural museum in Hong Kong. When questioned about his focus on Beijing design at BJDW (there was an absence of work from places like Guanzhou, Shenzhen and Shanghai), Aric told The Guardian:

“The difference between the regions can be quite stark. And Beijing has a higher degree of consciousness about what Chinese culture is. Designers here are really asking themselves how to express traditional applied arts and philosophy in a new way. China spent a lot of time destroying its own culture, and it’s still rediscovering what it used to be and figuring out what it means now.”

I agree with Aric, and the general awareness of Chinese culture is what I love about Beijing so much. Even though large areas of the city are developed and modernized, you feel the old culture when you walk around the hutongs, through the Forbidden City and the Confucius Temple, through Taoranting Park and trips to deserted areas of the Great Wall. Shenzhen is ugly and off-putting, and has virtually no connections to old China. Shanghai can be lovely to look at but a lot of the people who live there are vapid and the expats tend to be toxic, greedy yuppies. Beijing is the city for intellectuals and bohemian types, and a lot of the foreigners who live there possess a genuine passion for Chinese culture. 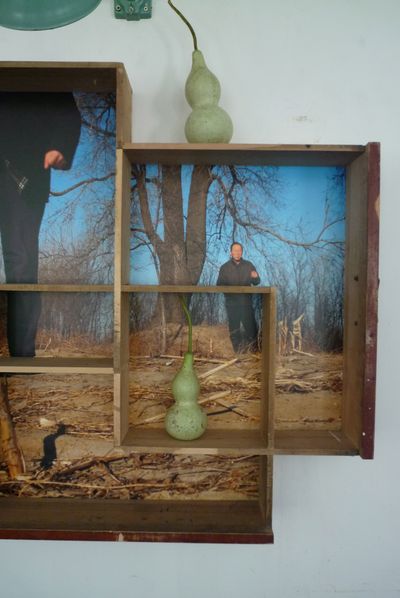 The next day we had a fabulous Chinese lunch (my favorite chilled wood-ear mushrooms plus decadent barbeque spare ribs, daikon radish salad, long pieces of water chestnut, some spicy chicken dishes, et al) at Fodder Factory in Caochangdi (right next to the compound/home of “Yoo No Hu”!). I was too busy chowing down to take photos of the food but here are some photos of the restaurant’s ecelectic decor.

Aric Chen was there and he gave a very illuminating speech, declaring how proud he was of all his friends who were exhibiting at BJDW because it’s no easy task to pull things off like this in China. A lot of the work and exhbits were self-funded and of course everyone involved has to face a lot of hurdles to get things done because of various bureaucracy, red tape and lack of funding. It’s not like in Europe where many glossy design fairs get substantial support from the government.

I’m glad Aric finally said something because frankly, I was getting irritated by some of the European journos on the trip who were judging everything with European standards. (When I told one journo that I liked the student art we saw in 751-D Park, he/she sneered at me and basically said I needed to get out to more art fairs in Europe so I could develop a proper perspective.) But over the last decade in general, we’ve seen a lot of scorn heaped on China by Americans and Europeans full of anxiety and fear about China’s rise, so I shouldn’t be too surprised.

And thank god Beijing Design Week has a rough-around-the-edges ambiance (and a minimum of tacky corporate-brand sponsership). Overly slick design and art fairs are boring! 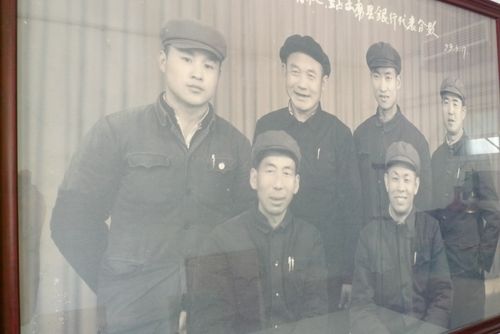 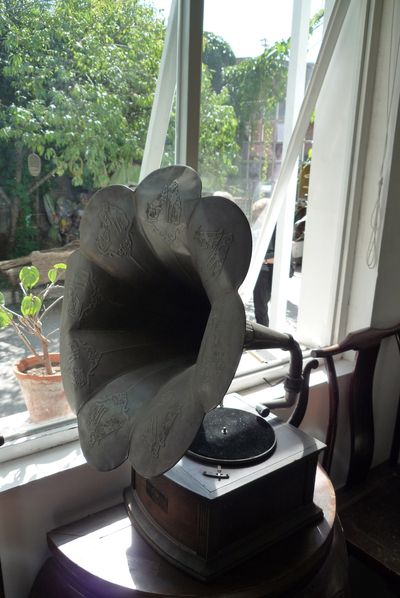 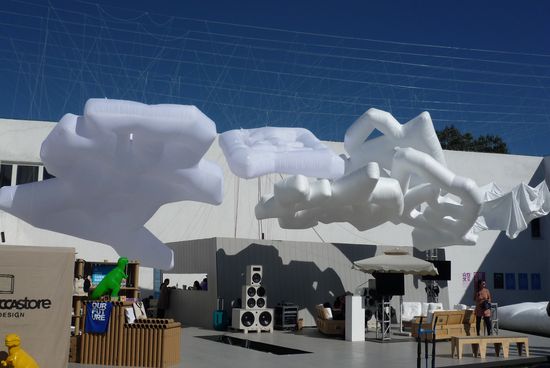 “Beijing Spirit” in the light of day. After lunch, we checked out some of the exhibits at Caochangdi’s Red Bricks Complex. The design of this area, I was told by one of “Yoo”‘s assistants, is inspired by buildings in Cairo. 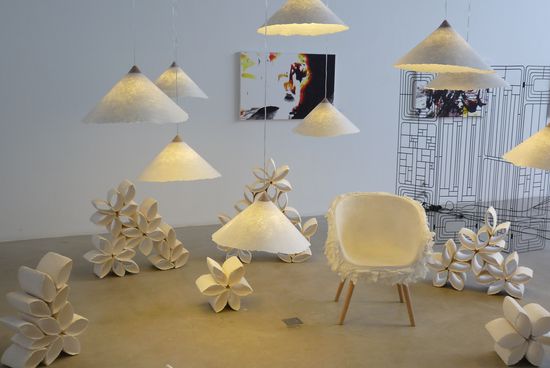 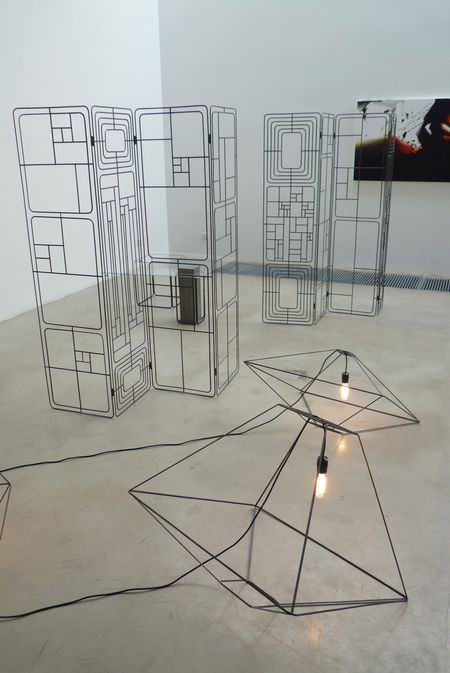 For her independent studio practice MICROmacro, Beijing-based architect Sara Bernardi created these room-dividing screens and lamps from reinforcing steel. They’re meant to be a “metaphor for modernity”, with the original material used for these traditional Chinese forms stripped away and replaced with steel to create not-very-functional conversation pieces. I particularly like the screens and find them a bit hypnotizing. 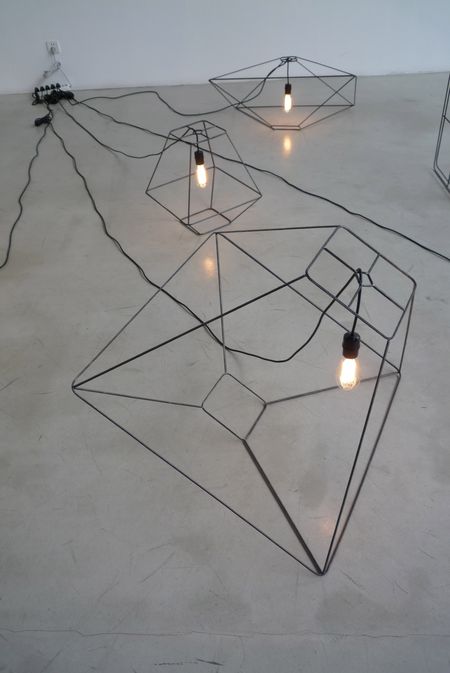 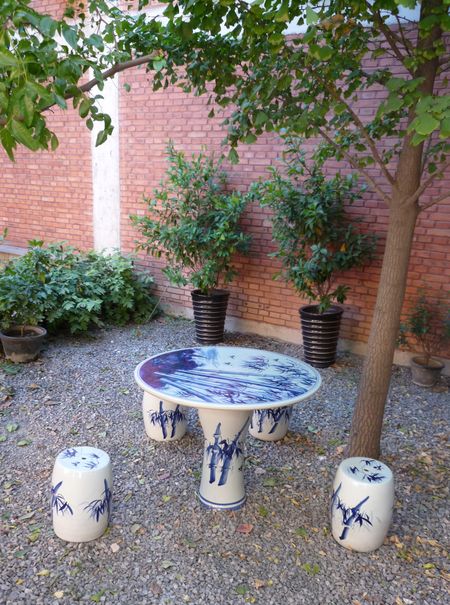 Not part of Design Week but I love this patio furniture. 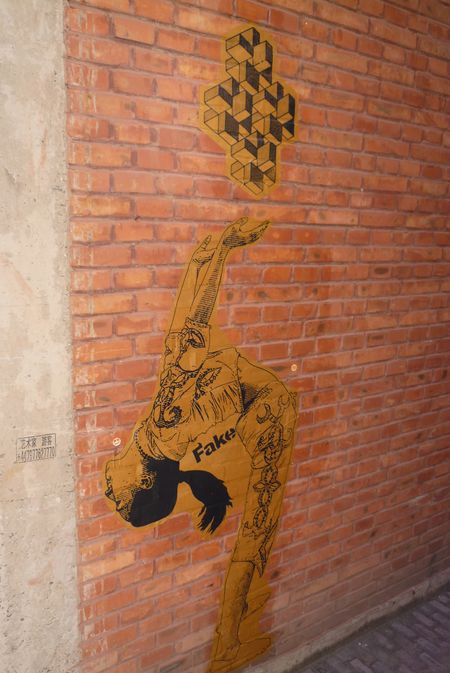 If you still don’t know who “Yoo No Hu” is, then maybe these Fake pieces on the walls of the corridors and courtyards of Red Bricks will clue you in. 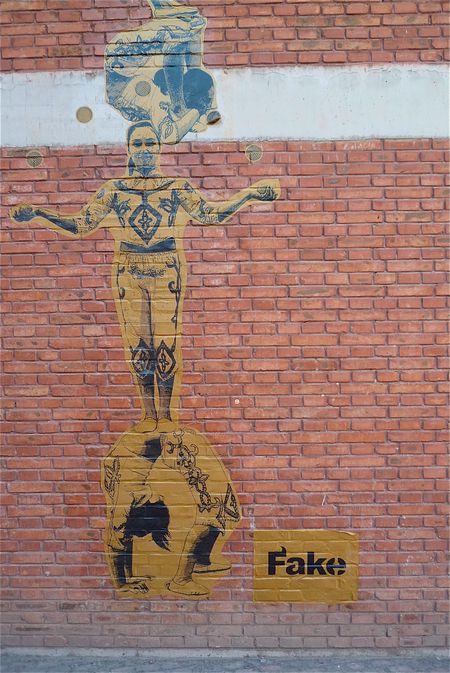 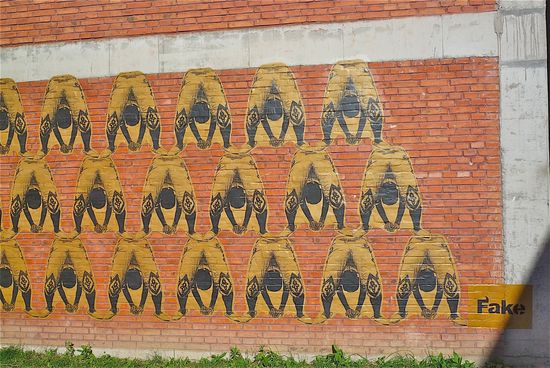 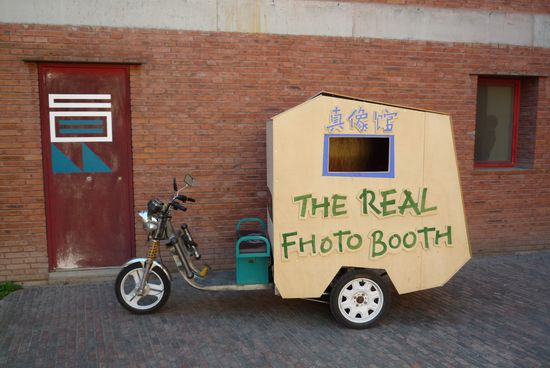 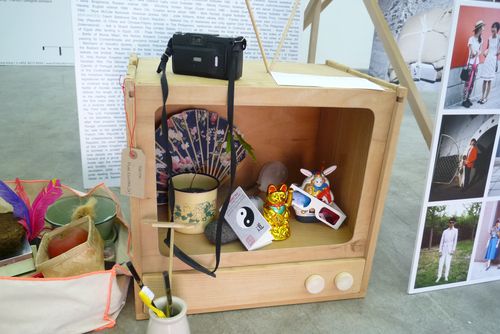 The Mobile Museum exhibit at Red Bricks…it kind of reminded me of my apartment. This piece is Tiaotai by Pilar Escuder and it seemed to evolve over the course of days. I think those are my 3-D glasses from the Kraftwerk show and my gold cat from my Mao Room. The camera on top looks like the Super-8 camera I gave to Vincent Gagliostro but maybe it’s just a still camera. 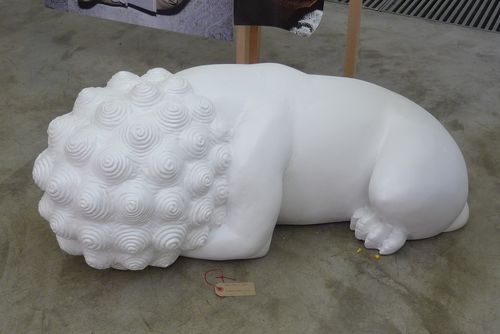 Our Time Lion by Luan Xiao 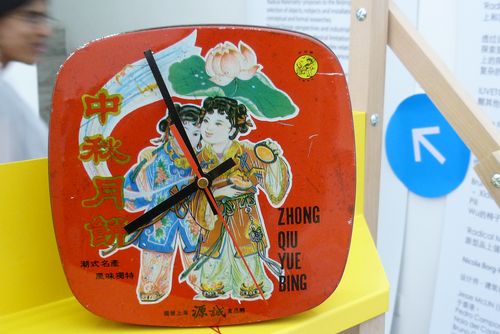 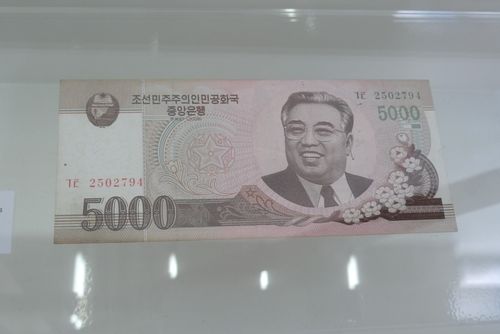 Love this! “Money Matters” by Zara Arshad. It’s a 5000 note from North Korea that Zara brought back to Beijing from her recent holiday in Pyongyang. Me = jealous. (It’s illegal to take North Korean money out of the country–oops!!) And you thought it was funny that China’s largest bill is only 100 yuan (worth about $15 USD. They stop at 100 so as not to exacerbate the gap between China’s rich and poor.) Well, this 5000 North Korean note is the highest denomination in the DPRK and it’s worth a whopping 78 cents USD! Only in North Korea, kids, only in North Korea. 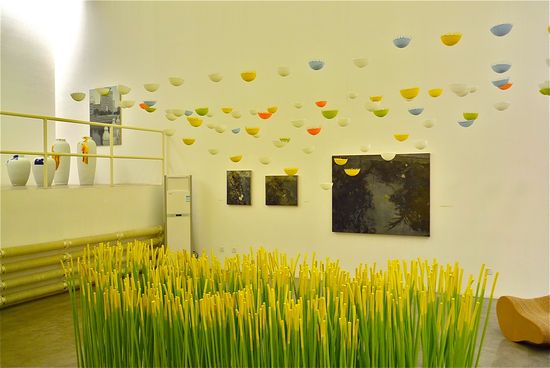 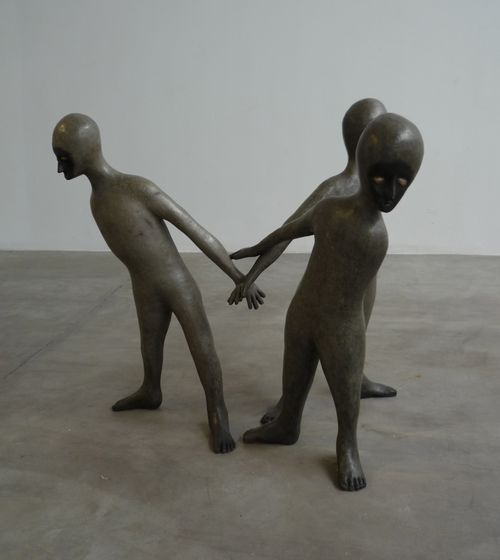 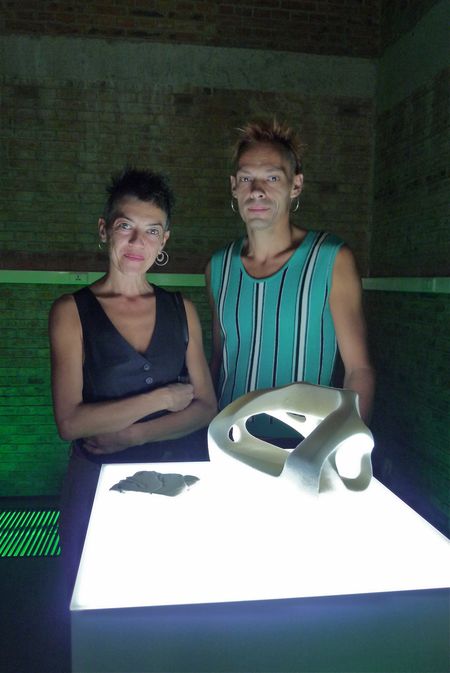 IKEA, your days are numbered….here comes Interieur Kortrijik from Belgium! My takeaway from this exhibit, “Memories of the Future”, was basically that you have a block of compressed hi-tech styrofoam which you put in a box that looks like a microwave and, like micowave popcorn, it expands….into a chair, a couch, a bed….and then you can compress the furniture again when you need to move. You can fit your entire living room in your handbag! No more hours of trying to put together a particle-wood armoire with IKEA’s baffling no-language instructions. Here’s more on the project:

“This is the future of furniture – smart materials with shape-shifting properties that package themselves in compact form and assemble themselves upon command.

Based in Caochangdi’s RAWR! Labs for Beijing Design Week, Noumenon has designed a demonstration scenario where a compact cube of smart material transforms into a designed seat, the end product. This transformation is achieved through a supply of heat, a thermal stimulus which activates the shape-memory attributes of the material in such a way that it subsequently transforms into the desired shape. This end product can be compressed to a compact cube – its packaged form – and returned to its final shape – the chair – an umpteen number of times. The packaging and the end product are one and the same material, the same object. Packaging doesn’t exist!

The product is actually imprinted in the memory properties of the material. There is no assembly! Tools and parts are replaced by the memory attributes of the smart material’s matrix. A special key (used to put together Ikea furniture, for example) is replaced by a chemical mechanism of the shape-memory material. Producing knock-down furniture (to reduce transport and shipping costs) becomes a shrinkage process. No packaging, no assembly, and easily repackaged and reassembled – a manufacturer and consumer’s dream.

Noumenon will also present a second prototype, a changeable structure which addresses the concept of ‘modular shaping’ as a vision for constructing large-scale structures. This prototype is based on structural geometry combined with smart joints, which can expand and reverse depending on electrical stimulus to create a number of different rigid surfaces.

Noumenon is a Belgium-based company which is developing exploratory prototypes made of innovative shape shifting materials to demonstrate new possibilities for the production, transport and life cycle of design products.” Have ping-pong table, will travel. This piece from dotdotdot is designed to encourage public and social interaction–and it has succeeded! Ping pong balls – yes. iPhone addiction – no. This installation–Village Mountains by Zhang Ke–is formed by ultra-thin steel panels. The 446 panels are welded to obtain a self-supporting honeycomb structure, painted white. Village Mountains was exhibited in Milan back in April for the Interni Legacy event. Me enjoying every second of my time in Beijing.