Susanne sent me this photo today, I really don't have any tracks of my designs. A month ago I was speaking with Miguel Villalobos, a friend to both Susanne and I, he told me that for sure Susanne kept the piece that she bought from me in the early 90's because she never got rid of anything. Funnily enough soon after the conversation with Miguel, I found myself sitting next to Susanne at the Lanvin show, his major celebration. I asked her if she still had the long black negligee that I designed and she said yes. Today, out of the blue, Susanne sent this photo to me of her wearing her  DP with her husband David. It is a bittersweet story, as the piece was part of my last  collaboration in New York and was with Isabel Toledo and Virginia Estrada.  Dream Studio was a collection of lingerie and loungewear  for a Japanese brand, actually it might have been more accurate to call it  'nightmare studio'.  There were some great memories from Dream Studio and some really not so great ones. Andre Walker styled the show, he is a star and always has been  and Stephen Gan produced it, he was 21 or 23, I forget now, wish I could forget the whole Stephen Gan saga but probably I never will. Moon in Scorpio. I mean, how do you forget when someone says "I wish your mother would die" when she in fact was dying. Decades have gone by and he never apologized.  She died so perhaps he got his wish although clearly it was destined to happen anyway.  None the less the black transparent dress still lives in the Chelsea Hotel with Susanne and this photo did make me smile. 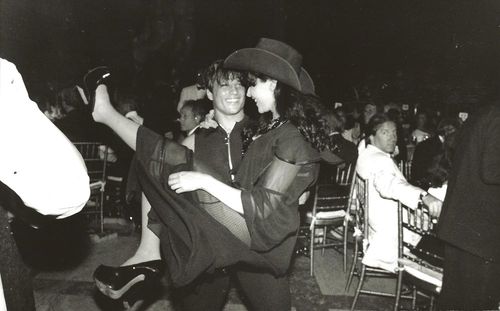 Susanne Bartsch with her husband David in the early 90's