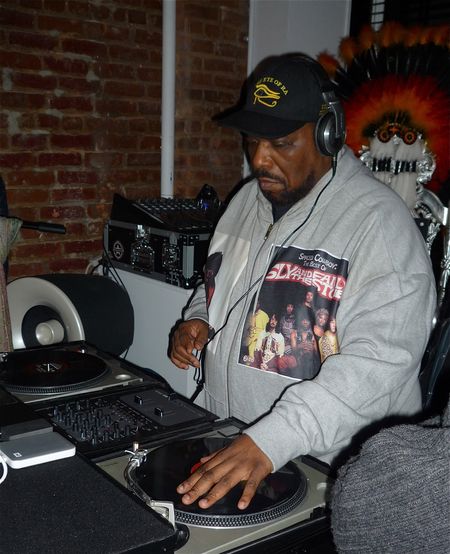 Because Manhattan is becoming more and more homogenized, sometimes one has to travel out to the wilds of Brooklyn for a great party. Last night’s opening of vegetarian and vegan restaurant Maimonide of Brooklyn, or M.O.B., was legendary, thanks mainly to a killer DJ set by the Godfather of Hip Hop, Afrika Bambaataa. I’m a huge Bambaataa fan. When I was a baby back in the early ’80s, my babysitter used to play his records for me. My favorite was the classic “Planet Rock” and because I was a huge Public Image, LTD fan, I also owned the 12″ of Bambaataa and Johnny Lydon’s apocalyptic dance hit “World Destruction.”

Of course, the time was ripe for an Afrika Bambaataa re-appearance, especially in the wake of the f*cked-up MoMa Kraftwerk ticket debacle. (Long story short, we all sat in front of our computers for 90 minutes waiting in a virtual queue and none of us scored tickets. NYC is full of some very bitter people right now.) “Planet Rock” and other songs are famous for sampling Kraftwerk, particularly “Trans-Europe Express” and “Numbers” (which Bambaataa treated us to last night in his sizzling mega-mix of everything from mid-80’s house music to Smokey Robinson.)

Kraftwerk didn’t understand what Bambaataa was doing at that time (early ’80s), accused him of theft, and even tried to sue. Being the stoic Germans that they are, the group began to sheepishly fade into the background as the hip-hop scene exploded worldwide. 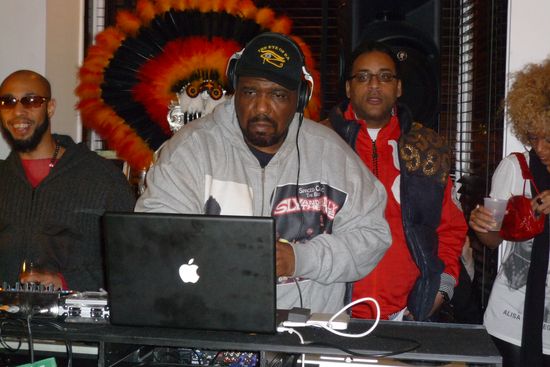 The party was from 7 – 10pm  but of course Mr. Bambaataa didn’t show up until 10….it was well worth the wait! The crowd was well lubricated at this point on beet-wine, verjus and chamomile-syrup cocktails. Honeychild, no one parties like those vegan lushes! Everyone was shaking their cruelty-free plastic, canvas and straw booties on the dance floor! M.O.B, is named after Maimonide, a Jewish philosopher known for his healthy-living beliefs. The decor is inspired by ’90s hip-hop and Brooklyn culture–and legends such as Notorious B.I.G. and Spike Lee. The place is the brainchild of of Cyril Aouizerate and his partner in the project is renowned French chef Alain Senderens. The Executive Chef is Neal Harden and Zorina Price is the General Manager. 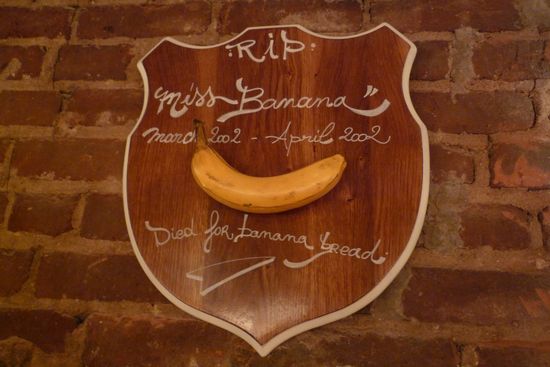 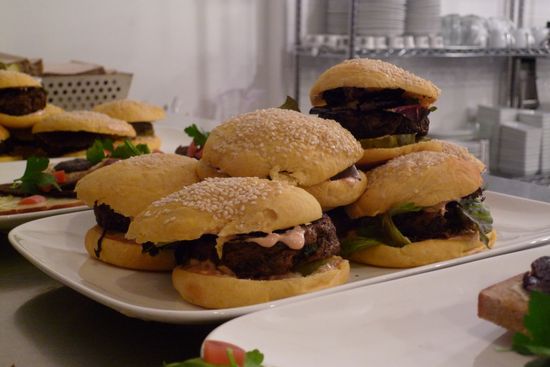 The food was outstanding. These veggie burgers caused a stampede when they came out of the kitchen. It’s been increasingly difficult to find a superior veggie burger in this town and I think I finally found one. It was rich in flavor. 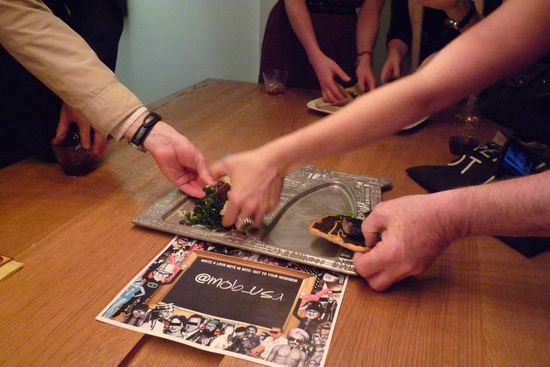 M.O.B.’s signature dish is open-faced sandwiches that are made in the shape of the arches of the Brooklyn Bridge. I tried a few that featured such ingredients as kale, shitake mushrooms and eggplant in a sweet sauce. I’m about 85% vegetarian now so I was in heaven. Other dishes we tried were the drief-fruit fruit saucissons and vegan chicken nuggets.

When the publicists at Nadine Johnson told me before the event that the food was “avant-garde vegetarian food for meat lovers” (again, right up my alley because I still love meat on occasion) I was skeptical. But the sauissons had a deep, smoky, meaty flavor. I would never eat McDonald’s Chicken McNuggets (they are made with an industrial anti-foaming chemical that’s used in nail polish and perfume!) so the vegan chicken nuggets were highly appreciated. 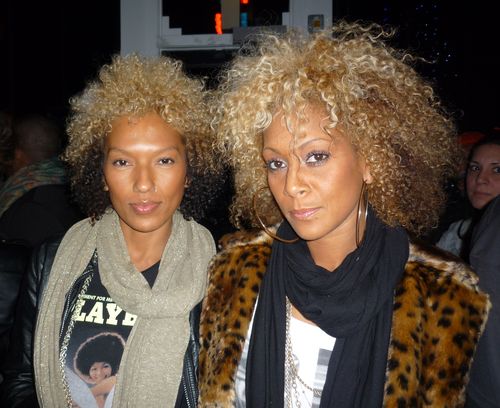 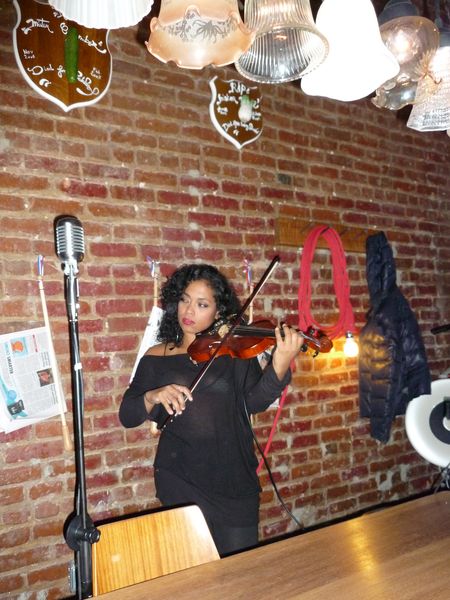 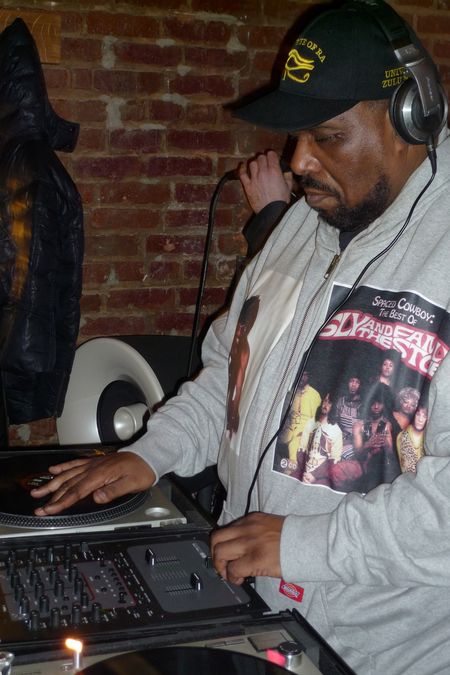 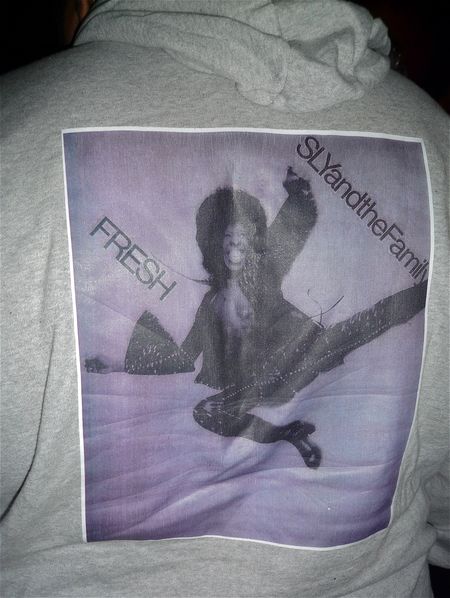 ….and here’s the back view. 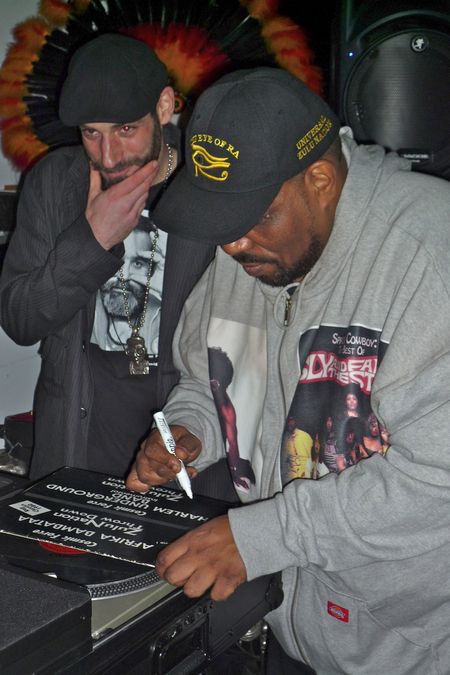 DJ Rabbi Darkside (a moniker impossible not to love) was thrilled to have his copy of Bambaataa’s “Zulu Nation Throw Down” original vinyl signed by the master. 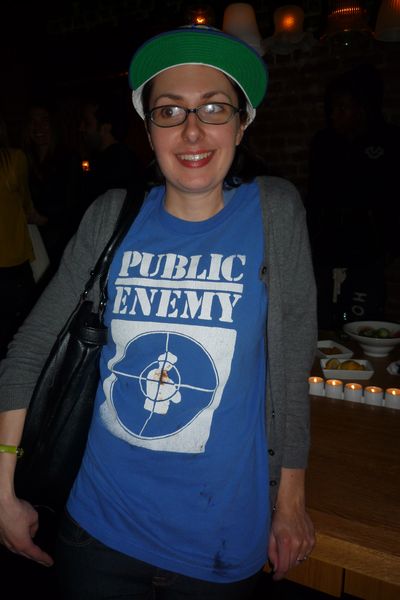 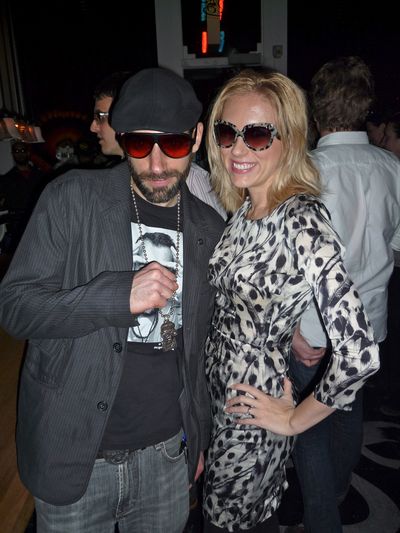 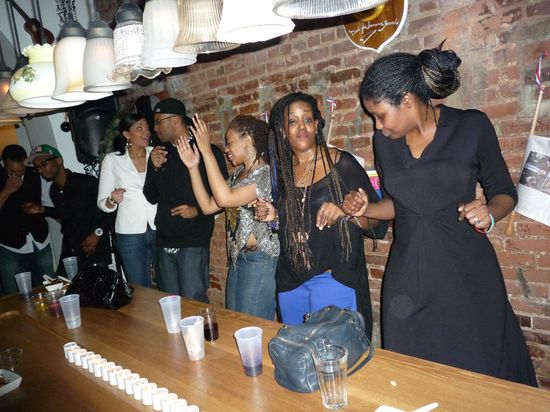