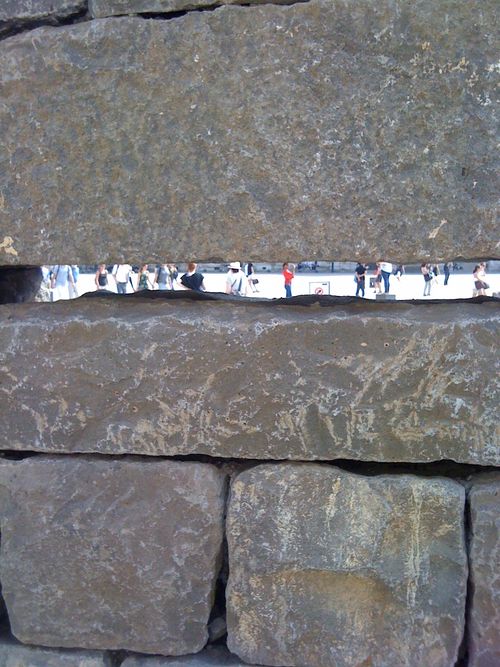 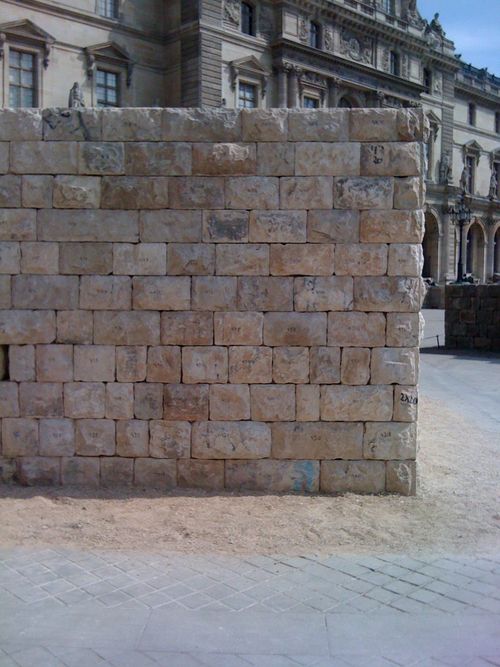 Two monumental works of Israeli artist Michal Rovner arose next to the Louvre Pyramid in Paris: one of the buildings is made of stones found in the ruins of houses Israeli and Palestinian, who still whisper the stories of their inhabitants .
For three weeks, Israeli and Palestinian masons rose stone by stone the two "Makom" ("spaces" in Hebrew) in the court Napoleon , near the entrance to the museum exhibition devoted to this contemporary artist.

The first "Makom" cube-shaped, is composed of limestone, the artist, born in 1957 in Israel, found in the rubble of homes in Jaffa, Ramallah, Jerusalem, Nablus and Bethlehem.
This compact structure of 40 tons, made of white stones not resized, touching, was presented in New York in 2008 by the Pace Gallery. It was back in Paris for the occasion.
"It's a collage of different times, different stories, different biographies, told AFP Michal Rovner, who lives near Tel Aviv.
"These are real people who have lived among these stones. Their stories are touching. It speaks of living together, "says the artist influenced by the socio-political conflicts in the Middle East whose origin dates back, she says, in very remote times.
The second "Makom", 70 tons, is a new creation, designed specifically for this exhibition at the Louvre. Made of black volcanic stones, the building is split diagonally, half in ruins.
Michal Rovner went to get the stones in the Golan, on the border with Syria on a fault, says Marie-Laure Bernadac, in charge of contemporary art at the Louvre curator.
"It took me a year to build this building in my garden," says the artist. The work was then disassembled, transported by boat and rebuilt next to the Pyramid of the architect Pei.
"Construction, Deconstruction. It is a mystery. Should he break the walls to bring people together? Is this the ruin? "Asks Ms. Bernadac.
Michal Rovner is a photographer, videographer and creates installations. The Whitney Museum in New York devoted a retrospective in 2002. The artist has represented Israel at the Venice Biennale in 2003.
She has already exhibited in Paris at the Jeu de Paume in 2005, which allowed the French public to discover.
The two "Makom" the court Napoleon, who will remain until 24 October, are a little "iceberg of exposure," says Ms. Bernadac. It continues in effect until August 15 at the museum with two giant projections on the walls of the medieval moats and the Department of Oriental Antiquities.
The artist has titled his exhibition "Stories." "I'm looking for different periods, by historical standards here but also in terms of the place where I am," she said. "It's important to incorporate my work in other places," she adds.
To allow its structures to be displaced, Michal Rovner uses a classic technique in archeology: the numbering of each stone. Each building can be deconstructed and reconstructed.
The exhibition has received support from LVMH. Until 29 May,? Espace Louis Vuitton in the eighth arrondissement, this behind the scenes of the construction of these Makom.