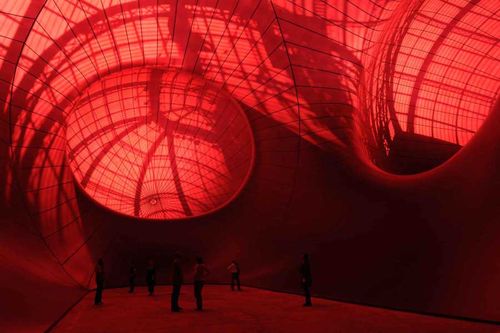 Anish Kapoor describes his epic installation as a 'single object, a single form, a single colour. The sculpture is made out of stretched PVC fabric over a metal frame. Kapoor's idea is to create a space within a space that responds to the height and light of the nave of the Grand Palais.  You can actually enter the artwork and become immersed in its colour and be transported.

Kapoor dedicated the work to Chinese artist Ai Weiwei who has been detained since April by the Chinese authorities for his criticism of the regime. It's been one month that the artist has been held without a voice and his famil does not even know where he is.

Open every day but Tuesday