Robert Clarke will open his latest exhibition, THE A-Z OF DOGS at the Rebecca Hossack Gallery on April 1 in London.

On view will be 26 portrait paintings of British dog breeds, each will represent a letter of the alphabet. For the series a cross section of friends dogs and commissioned dogs and some taken from inspirational images, will set out to explore the dogs' individuality. 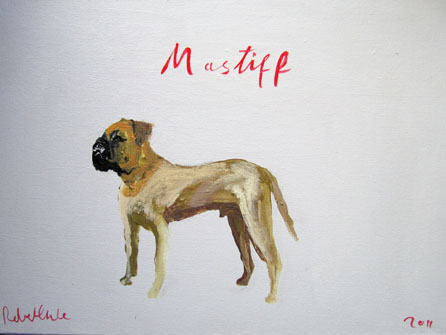 What is that quote…."I would love people more if I loved animals less ..or was it the other way around.?

When Robert was two he was attacked by a large German Shepherd confronted his fear when he was persuaded by his girlfriend to get a Jack Russell puppy in 2003. His time with the puppy club gently broke his fear of dogs to the point that when a friend asked him to paint their dog he was ready for the challenge.

The NYC edition of THE A-Z OF DOGS will be out later in the year with more of a "toy" American feel …Boston Terriers,Chihuahua"s and Bull Terriers etc.