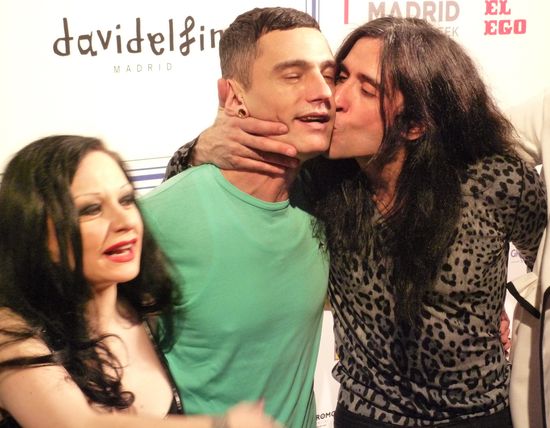 There are always so many great collections shown in Madrid so I wanted to take the time to share some more highlights from Cibeles with the Shaded Audience. There was Davidelfin, who always brings out the Almodovar crowd, a quirky menswear show that was presented off-site and, I must eat my words from my last report, an anti-fur protest on the day I wasn’t there….but my friend Caroline Attwood of WGSN filled me in on the details. Here’s how the rest of my week played out. 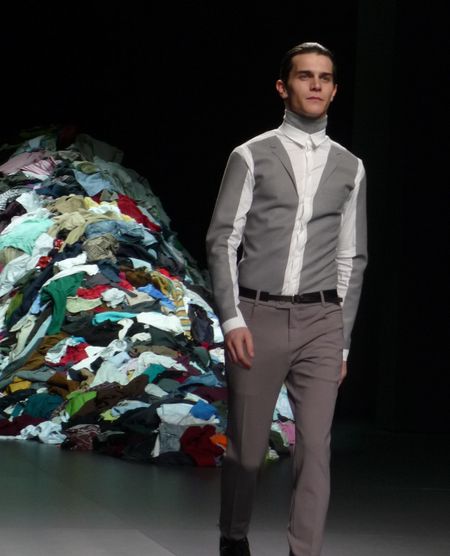 When we spotted the pile of raggedy schmattas at the end of the runway before Davidelfin‘s show started, I was worried that the designer would be trotting out looks that resembled Sasha Baron Cohen/Bruno’s 15-ensemble pileup that he trotted out guerrilla-style at an Agatha Ruiz de la Prada show. But no worries, as Davide kept it clean and interesting, with menswear pieces constructed in colorblock configurations of grey wool and crisp, white cotton. TRON-like patterns appeared on teal jackets and flowing voluminous satin skirts balancing out the structured pieces. All-in-all, a beautiful collection. 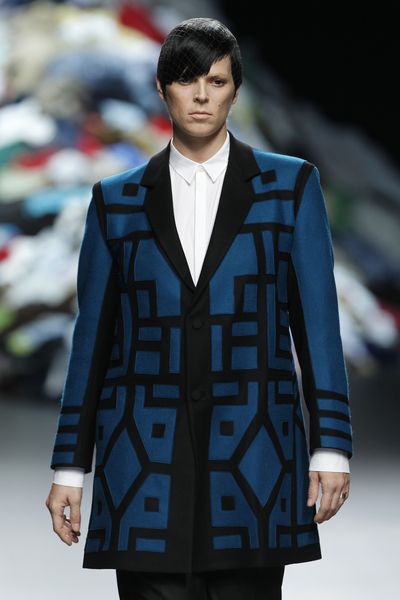 Davide’s androgynous muse, Bimba Bose, modeled the “TRON” coat, accessorized with a hairnet and a scowl. Scowls never seem to go out of fashion, oui? 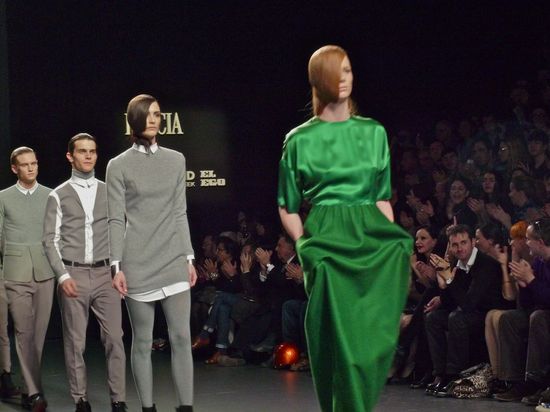 I adored the grey in the collection’s palette. It reminded me of the newly purchased outfit that was described with enervation as “ice grey” by the suicidal, frozen WASP Eve, played by Geraldine Page in Woody Allen’s “Interiors.” The austere pieces were a nice foil to the brilliant emerald-green wools and satins. Simplicity at its best. 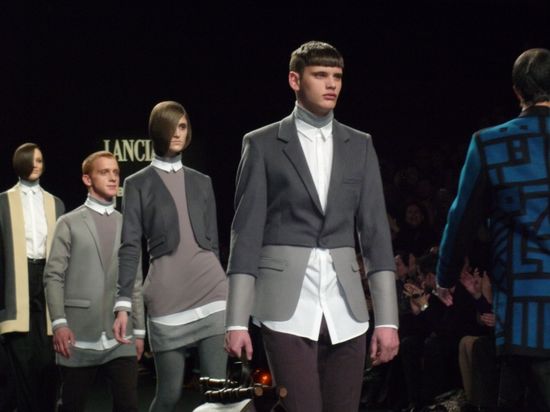 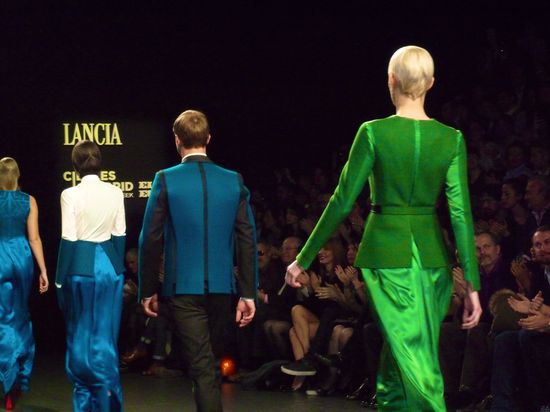 Towering transsexual actress Bibi Andersen sat front row at Davide’s show. Born in Tangiers (her real name is Bibiana Fernandez – I guess she was impressed by Bergman’s Bibi Andersson), Bibi has appeared in several Almodovar films (she has played both a biological woman and a transvestite) including “Matador” (arguably one of his best films), “Law of Desire” (another of my short-list favorites) and “High Heels.” My friend Fernando Casas took the above photo as Bibi proved to be quite elusive in the Kissing Room and I didn’t get a shot of her. 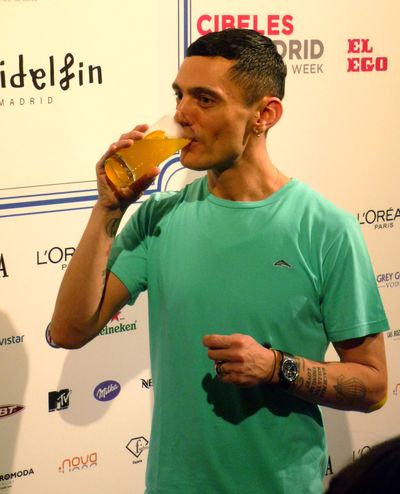 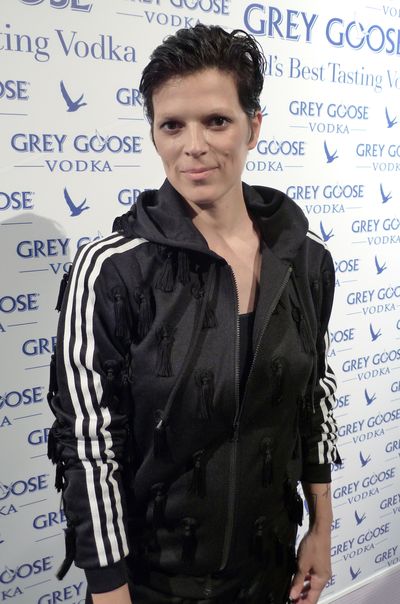 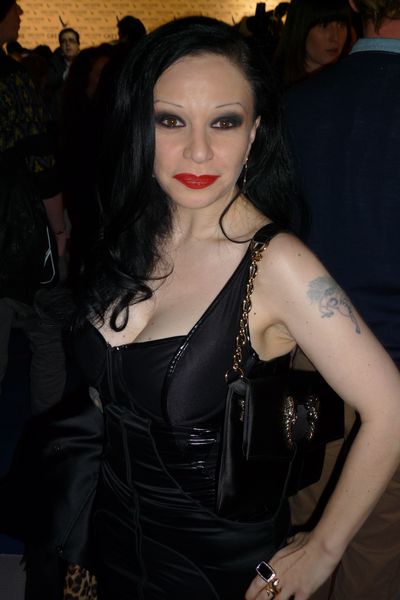 Here’s a video from Alaska’s glam rock/disco/Dead or Alive phase: 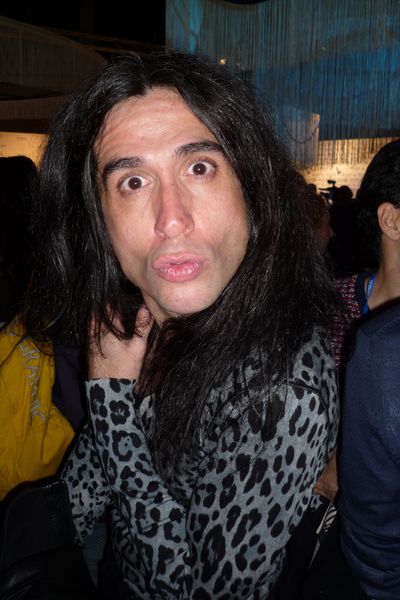 The New York Dolls era lives on in Spain with Mario Vaquerizo. 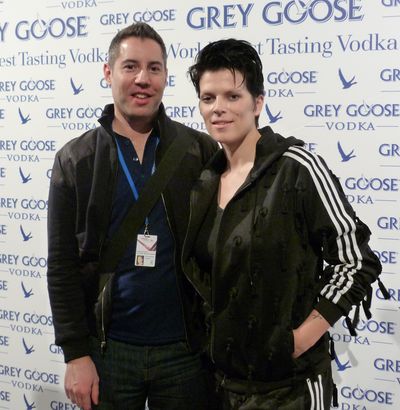 Me and Bimba Bose. I was delighted that Bimba remembered the piece I wrote about her for DUTCH magazine back in 2000 when she walked for Miguel Adrover in New York. 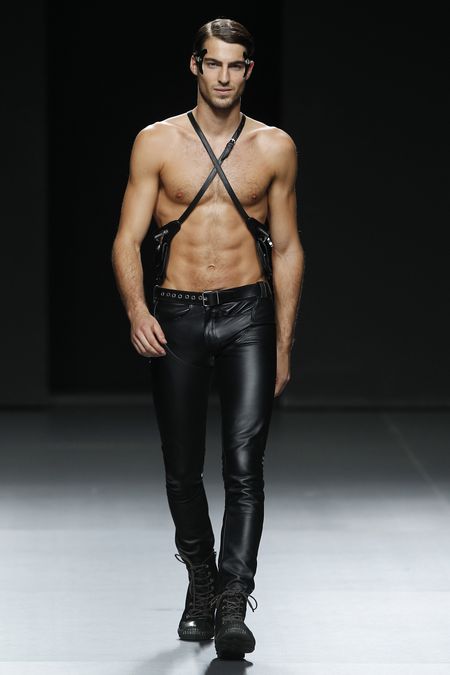 (Above) Even though I had left by then, it just wouldn’t be my Madrid fashion report without some Carlos Diez man candy. 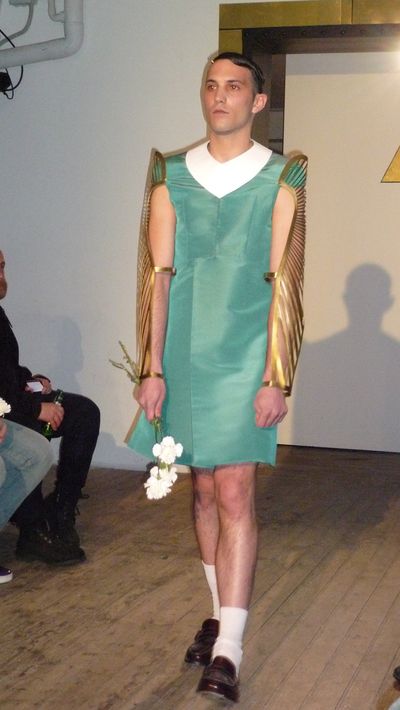 We were treated to man candy of a different sort at the Carlos Morante show, which took place one floor up a flight of creaky stairs in a former fabric store on Calle Atocha near the center of the city. The show drew the quasi-bohemian, queerer echelon of Madrid’s fashion crowd (including a Catalonian whom I dated back in the late ’90s) who lent an underground-happening vibe to this refreshingly under-produced affair.

Morante, who is only twenty-four, told me he wanted to achieve something that combined “school boy uniforms and 1950s’ couture silhouettes.” But there were higher, more intellectual aspirations involved as well. “The collection is inspired by beauty and proportion claimed as a capital reason itself,” he told me. “And the brass pieces are drawn regarding the use of the golden ratio, which is attributed to architecture and other artistic disciplines, and the aesthetic character that is attributed to objects that follow the golden ratio.”

This is a collection for aesthetes…exquisite dandies and avante-gardists who apparently still exist: A young Spanish journalist in the Cibeles press room told me he knows men who go out in Madrid wearing the “full Morante look, the shorts and all”–a Madrileno fashion cult. The fabrics were rather lovely: silk faille (one of my favorites), loden, waterproof silk, cotton gabardine and hand-sewn, double-faced cashmere. The music was whimsical and campy, with Esquivel’s “Parade of the Wooden Soldiers” and “Un Muchacho Como Yo (A Boy Like Me)” by Pablito Ortega on a soundtrack that sounded like it was emanating from a Victrola.

After the show a seemingly deliberate amateur flamenco (if I’m not mistaken and I probably am) band performed downstairs while raw oysters, jamon Iberico and gin-and-orange cocktails were served. I’m beginning to see a theme for my annual Christmas-tree-trimming party this December…. 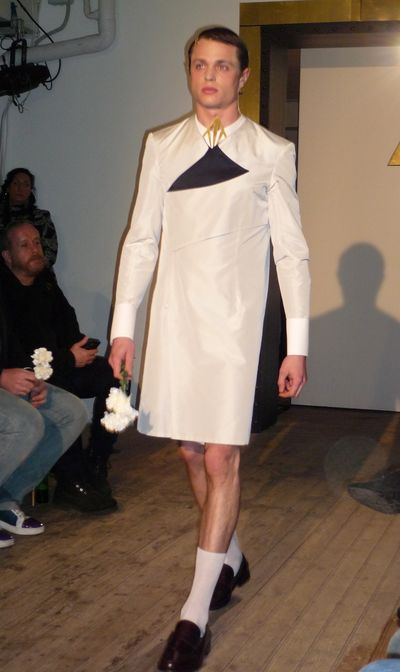 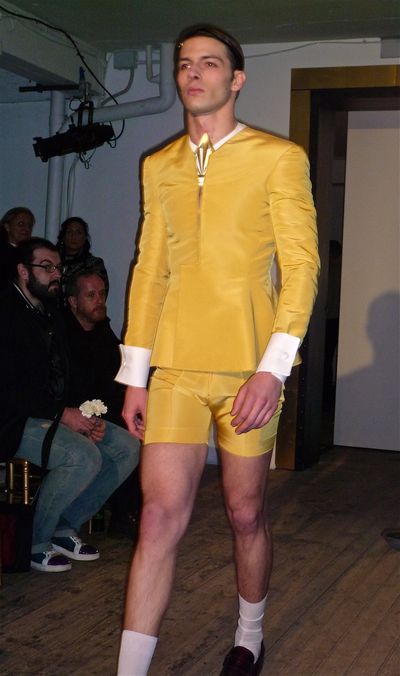 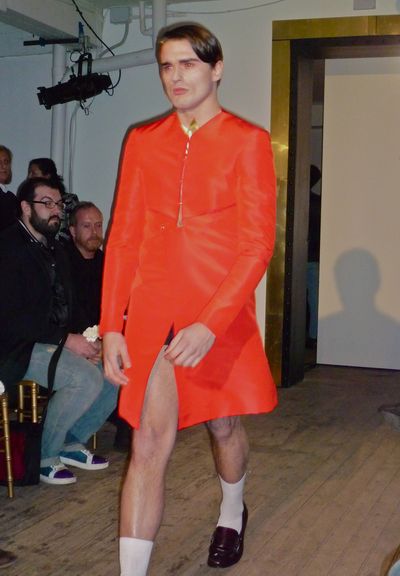 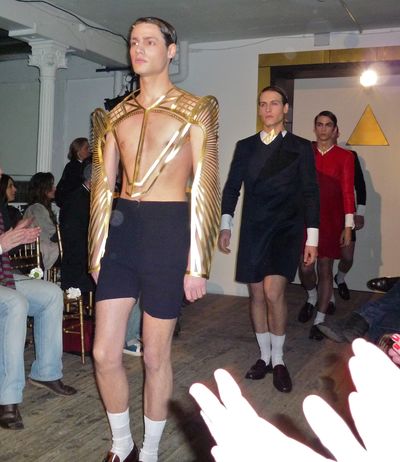 This video was shown during Morante’s post-show cocktail. 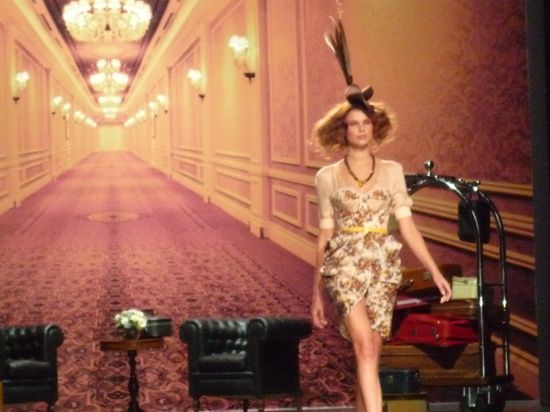 Alma Aguilar‘s collection was inspired by a hotel she stayed at in Mallorca last year which apparently had some very elegant guests–mondaines who flocked to the island for its Mediterranean tranquility. The designer felt that she “had to tell the world” about them. I loved that some of the models carried hotel keys, the kind that have enormous metal globes attached to them which are left with the front desk when you leave your room. So much classier than the whole plastic-card situation. I loved the hat on this model because it resembles the hood worn by hunting falcons. 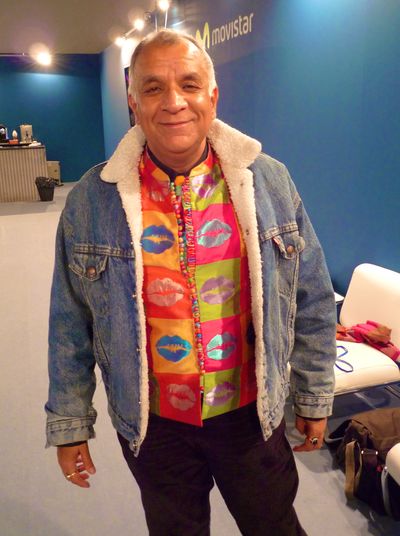 My friend Jivi Sethi, who lives between Delhi, Goa & Madrid, is wearing a vest specially made for him by Manish Arora (“my daughter”), the Indian designer who was recently appointed as the new creative director of Paco Rabanne. 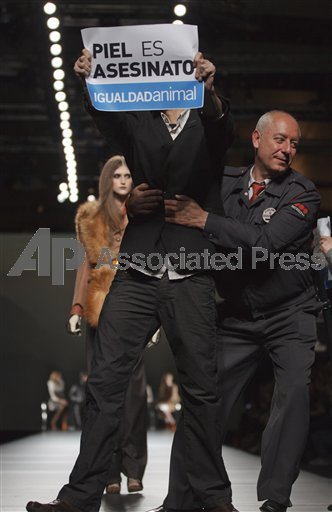 Ion Fiz‘s show was disrupted by an animal-rights activist on the day I had left Madrid. My friend Caroline Attwood reported that the entire audience “burst into applause” when the rabble-rouser was dragged away. Because I am a ridiculous conspiracy theorist I am going to opine that the protestor was probably from Barcelona and his anti-fur objections were really just a guise for a protest against the central government of Spain, which Catalonia has long sought release from. Bullfighting was recently outlawed in separatist Catalonia and a few Spaniards have told me they believe it has little to do with compassion for the bulls and everything to do with denouncing the traditions of Spain. 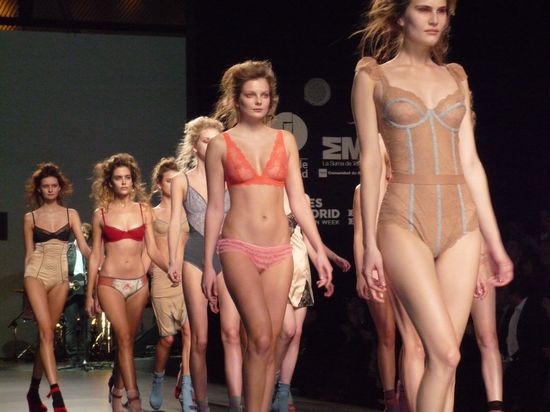 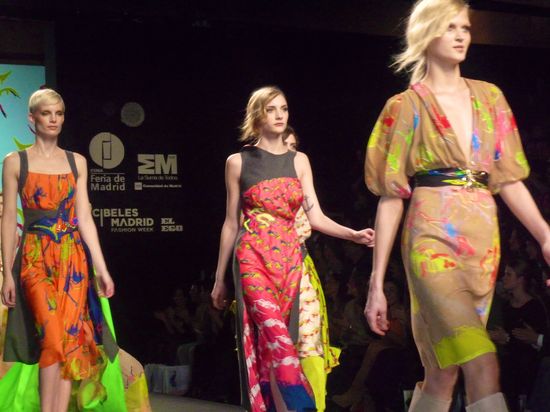 At Adolofo Dominguez, we were led to believe that his painterly splatters, fluorescent charteuse & citron and bright tangerine hues were spun by the elegant metal spider brooches that appeared everywhere in the collection. 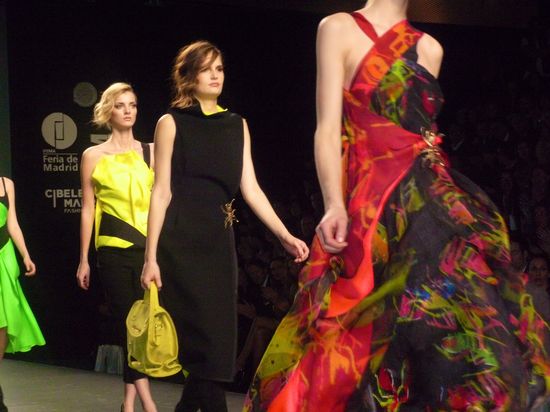 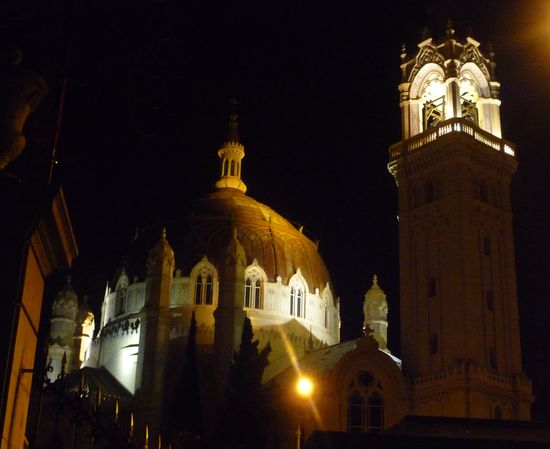